Kordinate
Home News Fashion ‘Ad Manager is trailblazing, and it’s exactly what businesses like mine need!’:... 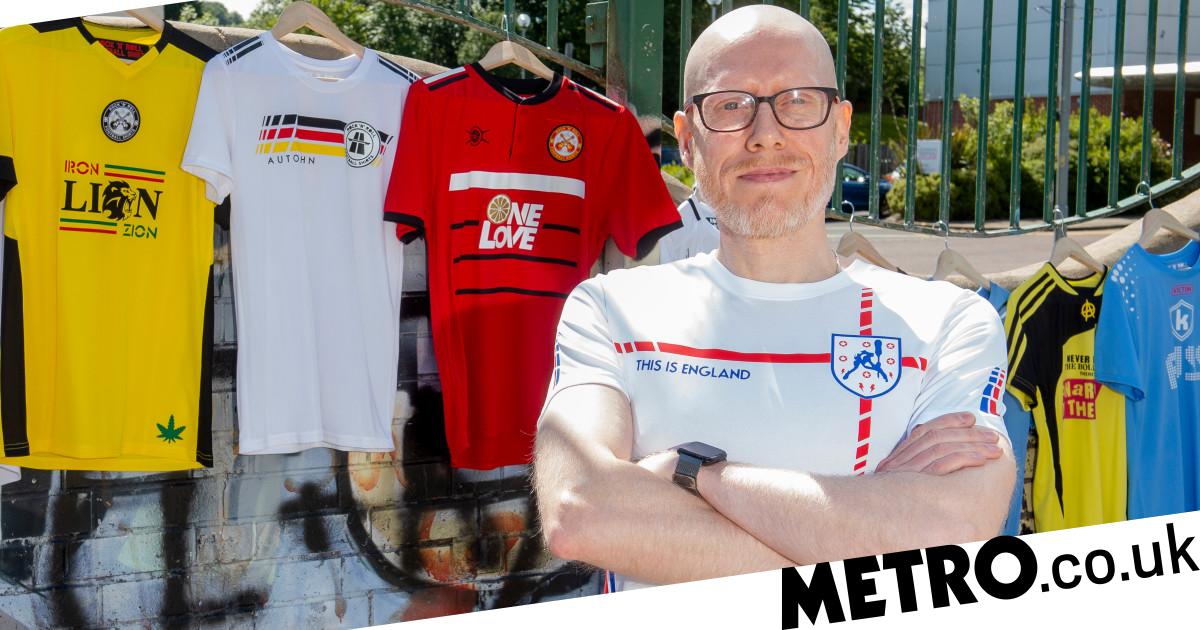 When the pandemic first hit in March 2020, Dan Hinksman’s business was on the cusp of a much-needed breakthrough.

Having launched in 2019, sales of his rock and roll-themed football shirts had finally started gaining momentum, and he was just about to get his big break selling them at a concert.

But, as the country went into lockdown, and outside events were cancelled, Dan, 44, from Accrington, Lancashire, saw orders grind to a halt.

He said: ‘A tribute band called The Clone Roses were going to play to 1,500 people to mark the 30th anniversary of the Stone Roses playing Spike Island, and my name was being put forward to sell my products on the night.

‘I was on cloud nine because it felt like I was on the cusp of a breakthrough.

‘Then Covid struck. This event could have got me some key exposure and I could have made a chunk of money to invest and expand quicker than I would have been able to – and suddenly it was all taken away.’

Dan, like thousands of other SME owners up and down the country, saw his income plummet.

‘People just weren’t spending. Orders picked up when the weather started to improve in the summer last year, but it would drop off again.

‘I thought when bands announced tours, I might sell a few shirts off the back of that, but a lot of bands have sat tight and don’t want to announce anything.

‘Kind of keeping my fingers crossed the Gallagher brothers would bury the hatchet and reform. That would do me the world of good!’

Dan didn’t qualify for government help, and was forced to find a part-time job which bought him some ‘breathing space’ and helped make ends meet.

It’s now that lockdown restrictions are easing that Dan believes sales will start to increase again.

‘It’s been challenging when you think you have got something you are passionate about and you feel it slipping through your fingers through no fault of your own. It is heartbreaking.

‘The way things have been over the last 12 months, I need to raise awareness of what I do, that’s worth its weight in gold for me.’

It’s with small and medium business owners in mind that MailMetroMedia has launched a new advertising platform.

Ad Manager aims to help companies come back from the pandemic thriving, with targeted campaigns that showcase their product or services to MailMetroMedias’s huge 25 million audience.

And Dan was one of the first businesses to try it out – with his campaign achieving more than one million impressions in just a week.

‘I’m over the moon with the sheer amount of exposure and the number of eyes this advert has fallen upon. Not in a million years would I have expected that.

‘As well as brand awareness, I’ve seen a spike in my web traffic – and I know it’s come from the MailOnline as it’s easy to see on the Ad Manager system.

‘This type of brand exposure is like gold dust’

‘It’s a fantastic team; whenever I had questions they were answered quickly, with excellent communication.

‘I’m chuffed to bits. Ad Manager is trailblazing, and it’s exactly what businesses like mine need.’

The new self-serve Ad Manager makes advertising on MailOnline, Metro and iNews easy. It takes minutes to set up, and your campaign could be live in less than 24 hours.

You can advertise to more people in your area than your local titles can reach, and you can target by postcode, interests, and life stage to reach as many customers as you like.

There are no hidden fees, and you can control everything, from budget to target audience to creative design.

To give your small business a boost, visit MailMetroMedia’s Ad Manager today!

Dan first had the idea for Rock ‘N’ Roll Football Shirts [rocknrollfootballshirts.co.uk] while working at a soft drink company, where he had been staff for 16 years.

He had always been interested in football kits from a design perspective – and he admits to being a ‘massive’ music lover.

He explains: ‘It was during the World Cup in 2018 I had the idea to combine my two passions.

‘I had no idea at the time it was going to be my business. It was more ‘this would be a good idea if someone else did it’.’

Dan had been saving for a new car, and decided to use the money to buy the kit he needed to make the football shirts – and set about training himself how to produce them.

‘I did it as a bit of fun to begin with. But then I ended up taking redundancy. I decided to bite the bullet. I had never done anything like this before in my life.’

In October 2019, Dan was ready to launch his website – but it was more difficult than he had anticipated, and sales by Christmas were lower than he expected.

He then had a stroke of luck when his friends attended a Clone Roses tribute band concert, and handed one of Dan’s shirts to the lead singer, Gavin Scott, who loved it.

Dan then inquired about selling his products at their next gig, which the band agreed to, leading to sales and great exposure.

It was just before their next concert, where Dan was going to be selling his shirts to a bigger audience, that Covid hit.

Dan added: ‘I don’t want to get my violin out as there are people in far worse situations than me. ‘You have to just put it to the back of your mind and just go ‘look these are the cards you have been dealt you just have to play it the best you can’.’

The lifestyle email from Metro.co.uk

Get your need-to-know lifestyle news and features straight to your inbox.

Xiaomi Mi 11 Ultra’s Sale in India Will Start Soon, But There’s a Catch

FIR against the person who cheated by becoming the son of Rajkumar Hirani, gave...

Now the controversy over the poster of Bhoot Police, the user asked Mohan Bhagwat...