After the defeat of the Congress in the 2019 Lok Sabha elections, Keshav Chand Yadav resigned as the President of the Youth Congress, after which Srinivas was given the responsibility of the Interim President of the organization.

He comes from a non-political family in Karnataka and talks about humanity rather than politics. Call them, then the voice of Indira Gandhi, the former Prime Minister of the country, is heard, which explains the meaning of democracy. He has been working day by day to reduce the problems of Corona victims in the country and is upset that some people have made Corona an ‘event’ for their benefit. We are talking about Indian Youth Congress President Srinivas Biwi (BV Sriniva), who has become the messiah of thousands of people in this hour of crisis with his style of working and the determination to carry out every responsibility with full devotion.

Born in a middle-class family of Balija community (OBC) in Bhadravati in Shimoga district of Karnataka, Srinivas had no connection with politics. No one in his family has ever lived in politics. It will be interesting to know here that he was fond of cricket and he was also a part of Karnataka Under-16 team. Srinivas could not complete his graduation due to busyness in cricket. While playing cricket, a private company signed a contract with him and he served as a senior officer in that company for some time. 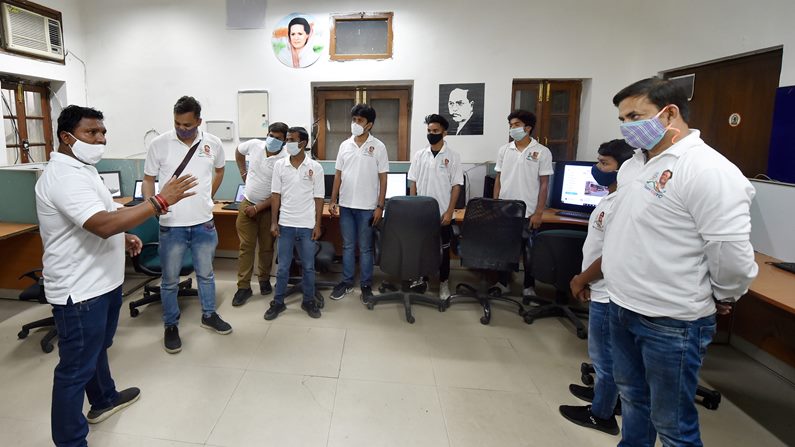 After not achieving the expected success in cricket, he turned to politics. His political journey started as an NSUI member while studying at the National College, Basavanagudi, and on the basis of his outspoken views and clear political thinking, he was first at the block level, then at the district level, then at the state level and then at the national level. The youth went on to become a strong face of the Congress. After being recognized as a militant activist at the grassroots level, 40-year-old Srinivas first became the secretary of the Youth Congress in 2014 and then a few years later the general secretary. In the year 2018, Srinivas appointed the then Congress President Rahul Gandhi, Keshav Chand Yadav, who hails from Deoria in Uttar Pradesh, as the President of the Youth Congress and Srinivas as the Vice President.

Srinivas became the messiah for the needy

After the defeat of the Congress in the 2019 Lok Sabha elections, Keshav Chand Yadav resigned as the President of the Youth Congress, after which Srinivas was given the responsibility of the Interim President of the organization. In the year 2020, he was made the full-time chairman. He came to the eye of the party leadership and the media when, after the nationwide lockdown in 2020, he along with his colleagues helped the migrant laborers and other needy people in a big way. After the second wave of Corona virus this year, Srinivas became the Messiah for many needy people. According to Youth Congress officials, at the national level under the leadership of Srinivas, about 1000 workers are helping people these days. From managing plasma and oxygen for Corona patients to hospitalizing people and arranging food for the needy, the Youth Congress is doing all these work under their leadership these days.

‘Person’s life is important for us’

Srinivas said, “For us, a person’s life is important and not who the person is. Our Indian culture taught us ‘Atithi Devo Bhava’ and they (foreign embassies) are our guests. So when we got an emergency call, we immediately reached out to help them. I do not comment for those who criticize our help. I only want to say that we are helping to save the life of everyone who is in trouble. I do not want to do politics on this. “

Seven strains of Corona have been found in India so far, new variant has increased concern, laxity may be expensive

SC should not ask for ban on media reporting of oral comments of judges: Election Commission

Get a patient monitoring system as a new way of security