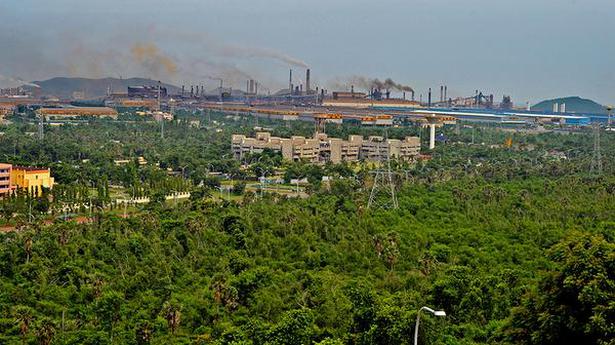 
A relay hunger strike was launched by representatives of various trade unions against privatisation of Visakhapatnam Steel Plant (VSP) at the Gandhi statue, near GVMC, here on Friday.

The trade union leaders said that VSP has achieved a turnover of ₹ 18,000 crore this year despite the pandemic situation. The interest on loans, taken from banks, was also being paid. They wondered what has made the center think of privatising the plant. The center has no right to hand over PSU’s to corporate entities.

They said that a beach walk would be organized on April 4 and a hunger strike on April 18 with the involvement of the public and farmers. They also sought that the state government should also exert pressure on the center to withdraw its decision to privatize VSP.

Earlier, the trade union leaders, garlanded the statue of Mahatma Gandhi and raised slogans against privatisation and seeking continuation of VSP in the public sector. They also raised slogans of ‘Visakha Ukku – Andhrula Hakku’.

Sensex, Nifty Likely To Have A Muted Opening