Kordinate
Home News Economy Talent is Indian but product is not, says PM Modi on Google... 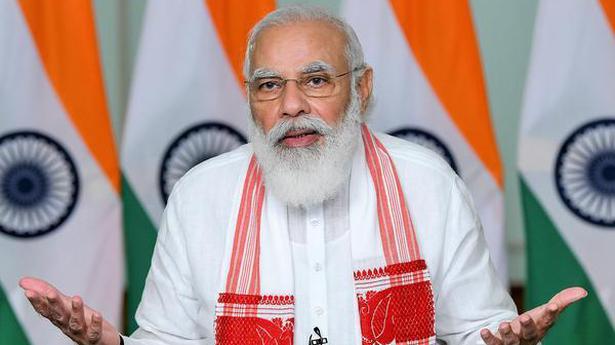 
Speaking at the sixth meeting of the Governing Council of NITI Aayog, Prime Minister Narendra Modi on Saturday emphasized there was a need to further strengthen start-ups and Micro, Small & Medium Enterprises (MSMEs) in the country.

“We recently liberalized geospatial data. If we could have done this 10 years back, it is likely that Google would have been made in India, not outside. The talent is Indian but the product is not, ”he noted.

During the meeting, Mr. Modi called upon states to work towards reducing the compliance burden for the common man as well as promote ease of doing business.

He stressed on the importance of better coordination between the center and the States for the country’s development.

“For the common man, there are thousands of complaints which can be removed. Now, that we have technology, we don’t need to ask people for the same things again and again. I would request States to reduce the compliance burden on the common man. This is important for ease of living. The center is also working on that, ”said Mr. Modi, who is also the Chairman of NITI Aayog.

“We need work on ease of doing business to tap global opportunities, and on ease of living for the citizens of the country,” he added.

On the agriculture sector, Mr. Modi said that for farmers to get necessary financial resources, better infrastructure and latest technology, reforms were key. “We have done many reforms which reduce regulation and government interruptions,” he said.

“Even though India was an agrarian economy, it imported ₹ 65,000- ₹ 70,000 crore worth edible oils. We can stop this. But we need policies to make this happen. This money can go to the farmers. There are many products that farmers can grow for the nation as well for exports. For this, it is important that all states need to plan their agro-climatic regional policy strategy and help farmers as per that. Even during corona, agri exports have increased but the opportunity is a lot more , ”He said.

The foundation of a country development is based on the center and states moving forward together in the same direction, the PM said. “Policy framework and better coordination between center and state is very important. For example, we have coastal states, and the blue economy has immense potential. Why shouldn’t these states leverage this opportunity? ” he added.

He also noted that in the national infrastructure pipeline, the share of states was 40%, and hence it was important that the states and the center synchronized their budget and set priorities. There is a gap of three to four weeks between the budgets of the center and states, and states can always take a cue from the union budget, he said.

“We saw that during COVID, how the center and states worked together, the nation succeeded and a good image of India was built before the entire world. Today, when we are going to complete 75 years of independence, this Governing Council meet becomes even more significant, ”he said.

Mr. Modi said this year’s budget received a positive response from all sides, which showed the mood of the nation. The nation had set its heart to move forward with speed. And youth was playing a major role in that, he said, adding that the private sector was also participating in this.

The governing council comprises the Prime Minister, Chief Ministers of States and Union Territories (UTs), with Legislatures and Lt Governors of other UTs. Saturday’s meeting will witness the entry of Ladakh for the first time, in addition to the participation of Jammu and Kashmir as a UT.

The meeting will also be attended by the ex-officio members of the Governing Council, Union Ministers, Vice Chairman, Members and CEO of NITI Aayog, and other senior officials of Government of India.

‘No TDS when Indian firms pay to use foreign software’