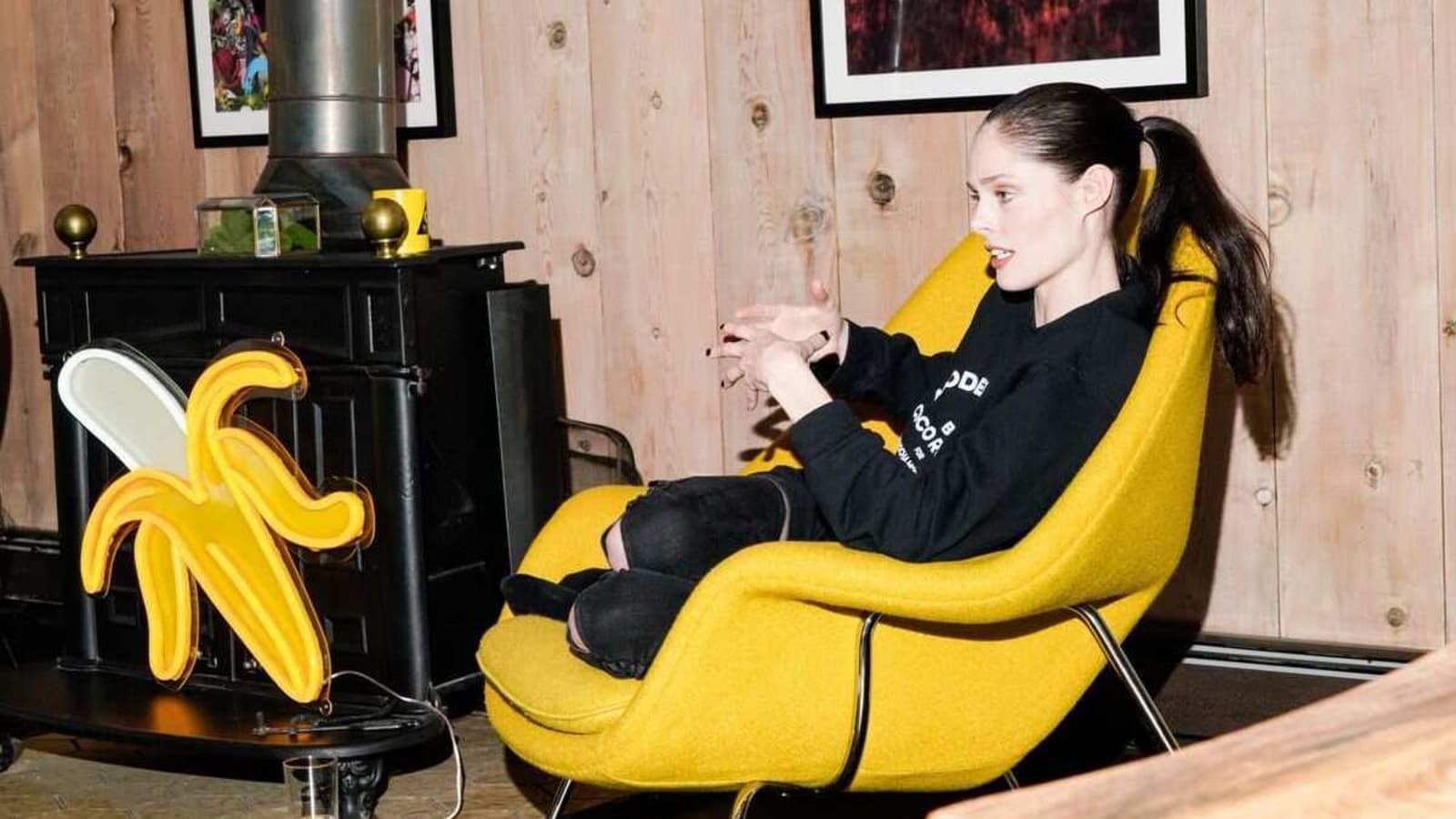 
Coco Rocha has only booked a few gigs over the past year. The world-famous model spent most of her time at home, like everyone else, waiting out the pandemic with her family. For her, work-from-home entails videoconferencing with art directors to figure out what can be done within the confines of her house in Westchester, New York, and using her husband as her only photographer. It’s fun to do a Zoom photoshoot once, she says. That gets boring fast.

For a global fashion icon, the pandemic is a challenge. For models early in their careers, it’s a full-blown crisis. Jobs are drying up, retailers are going out of business and advertisers only want to spend their shrinking budgets on proven stars like Rocha, who has graced Vogue covers and commandeered catwalks over the world.

Even before the Covid-19 outbreak, Rocha had made it her mission to improve working conditions for the next generation of models through her Coco Rocha Model Camp, which opened in 2018. Now she’s trying to help her students figure out what a post-pandemic business model for the industry will look like, too.

“It’s going to be very difficult for models to find their next paycheck,” says Rocha, 32. “I don’t have answers to everything. For other things, I have a few years under my belt. But this, I’m learning as we go. “

Managing pandemic fallout is just the latest addition to her curriculum. Models who gather at camp, either in an online course or in-person at a Westchester hotel, take classes in posing and runway walking. Rocha teaches them how to fake scream and cry on command. More urgent topics include how to interpret the contracts they sign and how to deal with abusive photographers who bully girls to strip naked, or worse.

The industry is still reckoning with widespread sexual-abuse allegations as hundreds of women (and some men) called for systemic change in how fashion labels, modeling agencies and glossy magazines do business. Add on top of that the biggest economic catastrophe since the 2008 financial crisis, and you have a situation where the 2,700 or so women and men who report working full time as models in the US are especially vulnerable to exploitation.

Models have median earnings of about $ 28,000 a year, according to the Bureau of Labor Statistics, and during lean times, the burden can land firmly on the most vulnerable.

During the last crisis, famed fashion houses like Christian Lacroix and Yohji Yamamoto couldn’t pay the bills and had to file for bankruptcy. Brands and agencies would ask young models trying to break into the business to work for free, paid only with clothes and a new line for their resume. Expenses fell rapidly on the models themselves. It became harder than ever to get clients to send checks months later.

“This is the exact same thing,” Rocha says of the situation now. Clothing retailers shed $ 70 billion in US sales in 2020, down 26% from the year prior, according to the US Census Bureau, and more than two dozen major clothing sellers went bankrupt last year, including Neiman Marcus, J. Crew and JC Penney. Publicly traded modeling agency Wilhelmina International Inc. saw revenue shrink 48% through the third quarter year to date from the same period last year, and Elite Model World’s merger discussions with a special purpose acquisition company, or SPAC, fell apart in November after holding talks with potential investors to raise new equity.

It took a full decade for the industry to bounce back from the last economic disaster, Rocha recalls. She fears it may be worse this time around.

You can’t go to school for modeling – at least not the traditional way. There are no technical high schools to learn the trade or college degrees and graduate programs like there are for fashion designers, even though models often start at a very young age.

Instead, many girls are “discovered” by a scout in their teens, spotted at a shopping mall like a 13-year-old Gisele Bundchen or on the street after school like Naomi Campbell at 15. Then they sign with an agency and move to a big city like New York or Paris, bunking in a group apartment and paying rent and fees to that same handler. Often the best advice has to come from fellow young models who are trying to navigate a dangerous environment right beside you.

Rocha herself was 15 when she was plucked from an Irish dancing competition in her hometown of Vancouver. Her uncanny ability to contort her 5’10 ”body in creative ways and affix the emotion to her face to match has earned her a royal nickname from the fashion industry: The Queen of Pose. Her image has been used to sell everything from Coca-Cola bottles and gap tees to Yves Saint Laurent perfume and De Beers diamonds.

In February 2020, just weeks before New York became the US epicenter for the health crisis and the fashion ecosystem fell into disarray, Rocha welcomed 18 aspiring models to her hillside cabin in Putnam County, New York. The four-day camp cost $ 2,500. A few participants had some photoshoot experience, but most were brand new. Those who were underage had their chaperone moms tethered to their hips. One girl had just earned her driver’s license.

Over the first three-hour session, they received detailed instructions on how to place their hands, frame their faces and move their arms. She gave them a short history lesson on modeling legends like Dovima from the 1950s, ’60s icon Twiggy and’ 80s superstar Iman. Stamina is key, Rocha told her students before having them jump straight up until they were exhausted.

There were constant reminders that it’s not all glamor. Halfway through their very first class, she warned that they’ll inevitably be put in scary situations with men. “You should never feel forced. You do not have to do anything, ”she told them. Later she had them write down the things they would be uncomfortable doing in the workplace, to share with their agent one day. They looked at her wide-eyed as she explained that clients would plant undercover staff in waiting rooms to see how they act before casting call.

Worst of all, Rocha knew they would need to be ready for run-ins with sexual predators. Prominent models such as Kate Upton and Cameron Russell have called out rampant abuse in their profession. The US Labor Department even cautions models to research agencies before working with them. Rocha remembers photo shoots where she was pushed to do semi-nude images when she was underage. She’s proud of what the #MeToo movement has accomplished but is frustrated that it took so long after she and her peers had been blowing the whistle for years.

“I guess we were too early, which is crazy,” Rocha told her students. “People would not take the model’s side. They would rather take the predator’s side. Girls in my generation lost their careers. “

Rocha temporarily shut down her school in March 2020 and reopened at a hotel in White Plains when state business restrictions eased in the summer. In the age of Covid-19, everyone sleeps in their own rooms, sits at least 6 feet apart and wears masks – which makes the facial-expression lecture a lot more troublesome than it used to be. Rocha teaches online now too, having hosted more than 20 classes so far with as many as 35 attendees each. She has in-person camps scheduled about twice a month between now and September.

The job market remains barren. For Kelli Childs, a 23-year-old college student from New Jersey who attended camp right before shutdown, it’s been virtually impossible to break into modeling. Her casting calls were canceled and photographers became unavailable as states placed limitations on business. Unable to find modeling work, she kept her focus on school. Only now are opportunities beginning to sprout for a newbie model like her, and in January she booked her first photo shoot since camp.

“I can’t waste such knowledge and the experiences I had with Coco,” says Childs, who’s studying marketing and has a day job in human resources. “Things are slowly getting back to normal.”

For a recovery to take hold, models will need mainstream clothing brands, not couture runways, to revive. Editorial shoots and runways can be skipped because they don’t pay much, but commercial contracts for e-commerce websites and advertisements are essential for models to earn a living wage. As Rocha tells her students: “High fashion has no money for us. Commercial models – they make money. “

Rocha gave birth to her third child in November, and camp is back on, once more in a new space. The hotel allowed them to move into a much larger area, far from where any guests would go – not that there are many guests anyway, with most travel still ground to a halt. Right about now, Rocha would normally be preparing to jet around the world to appear in the fall-season fashion shows, but not this year.

For now, it’s here where she’s busy demonstrating proper posture. Shoulders back. Hips forward. “It’s going to be the long recovery once again,” Rocha says. “We’re hanging in there.”

This story has been published from a wire agency feed without modifications to the text.

How to shift from loungewear to normal clothes

The best dressed at the Golden Globes

Mira Rajput is a vision to behold in draped mini dress...

UK Man Fined 2,000 Euros While Getting McDonald’s Meal For Grandson

2 Fruits And 3 Vegetables A Day Might Be The Secret...