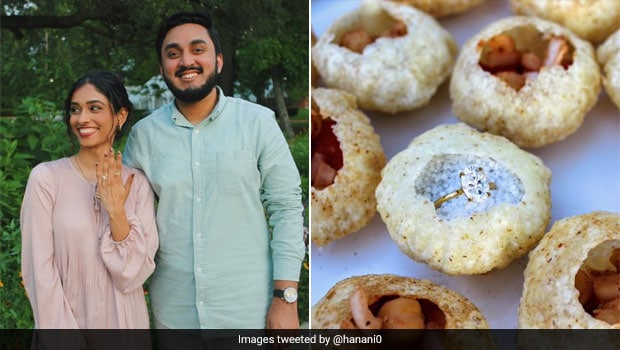 
The love for Golgappe is truly unparalleled in India. Whether you know it as Pani Puri or Puchka, Batashe or Golgappe – the dish is found in practically every nook and cranny across the country. Crispy fried shell-like balls are filled with potatoes, chana and chutney and then dipped in a spicy water preparation to create this tantalizing snack. But can you imagine using this yummy treat to propose marriage? A man took advantage of his girlfriend’s love for the popular street food dish and used it to hide their engagement ring inside! Take a look:

i mean,, can’t say no to pani puri
Gol gappay or pani puri are enjoyed by everyone and they are a real treat. But none of us would have imagined getting proposed through gol gappay. This man is doing things differently and after bizarre food proposals, pic.twitter.com/OwvGFc1Jd4— MonthlyAndazeJahan (jiddat group of publications) (@e_monthly) June 3, 2021

Twitter user @hanani0 had originally shared the photographs on the micro-blogging platform. “I mean, can’t say no to pani puri,” she wrote along with the pictures. The news was soon picked up by multiple handles all across social media including Facebook and Instagram. In the photographs, we could see the happy couple with the ring on the woman’s hand. There was also a picture of the plate in which golgappe were arranged, with the ring peeking out from one of them.

Twitter users and foodies across the world could not keep calm after reading about the proposal. Several called the gesture incredibly ‘cute’ and praised the man for the idea. Others thought that they would have accidentally swallowed the ring, had they been proposed to in such a manner.

Take a look at the reactions:

Congratulations ♥️it’s amazing u saw the ring ,some of us would have just gulped and not seen it & spoiled the moment ????— Skin Doctor (@itchymissy) June 1, 2021

My fat ass would have swallowed the entire thing, ring and all— ds (@dimplodocus) June 1, 2021

I don’t know you, but hi , Congratulations!! To the dude, you took a huge risk brother!! Most girls, including my better half , would have swallowed the Pani Puri with glee ????????God bless you both— Shuvayu Bhattacharya (@Shuvayu) June 2, 2021

(Also Read: People Are Hiding Rings Inside Avocados And Proposing Marriage To Partners!)

Earlier this year, a Reddit user’s interesting proposal for his girlfriend had gone viral. “Andrea I love you. Andrea eat beans with me,” he wrote in bright red letters to woo his lady love. Users couldn’t get enough of the hilarious yet sweet proposal.

What did you think of the Golgappa proposal? Tell us in the comments below.

A look back at Britney Spears’ conservatorship

Feel Like Snacking But On A Diet? Pooja Makhija’s Gluten-Free,...

Five of the most flattering summer shorts to buy now

How Gina Torres made producers rethink their ideas of American beauty