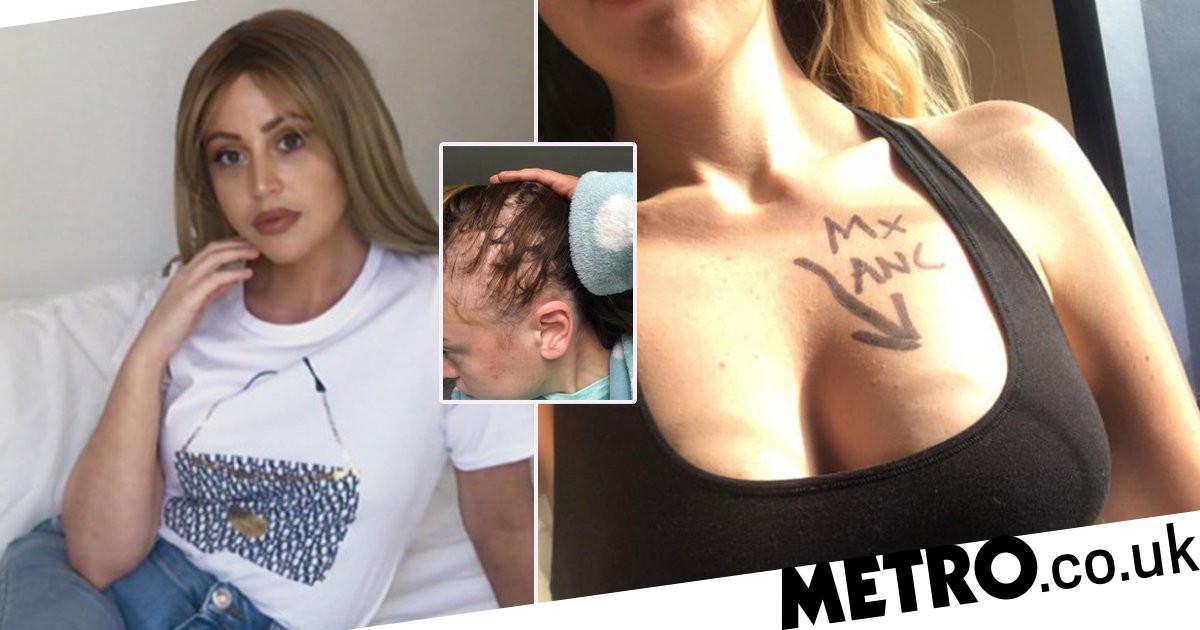 
A cancer survivor who was convinced the lump she found would just be a cyst is now working to raise awareness of the disease in young people.

Sacha Mills, 25, collapsed to the floor with shock when she was first diagnosed with breast cancer in May 2020 and did not believe it to be real because of her young age.

But a month later, the hairdresser from Basingstoke had her left breast removed.

Now she wants to benefit funding for the research and care charity, Breast Cancer Now.

Sacha, who is single and lives with her mum, said: ‘I first noticed something was wrong when I was getting changed for bed one evening and my hand brushed against my breast. I could feel a lump.

‘I went down to my mum and asked her if she could feel it too. She was quite shocked and said it seemed like a big lump. ‘

Sacha booked a doctor’s appointment and, while lying down for the examination, she says that she could see the lump protruding from her skin but initially was not expecting the worst.

She added: ‘The lump was visible, but I was convinced it would just be a cyst.

‘I was sent for a biopsy to determine what it was and, because I was worried, I brought my mum with me when I was asked to come in for my results.’

Two weeks after the biopsy doctors gave Sacha her results.

‘They put me in a quiet room before the consultant came in with the surgeon and he measured the lump,’ she said.

‘Then the consultant sat me down and said, “Unfortunately we’ve found what we didn’t want to find.”

‘I heard them say cancer and I didn’t hear anything else after that. I collapsed to the floor with shock. ‘

It’s usually more aggressive and harder to treat than other types.

Sacha continued: ‘My mum was so upset, she kept saying, “I’ll have it, why couldn’t it be me?”

‘I couldn’t believe it was really happening, I thought it was impossible. I was only 24. ‘

Then she got the news from doctors that the cancer had spread from her left breast to her lymph nodes, and that she needed surgery to remove the mass.

‘I went onto Google and found out that the survival rate is 77%,’ she said. ‘So I knew it was aggressive.

‘I went to another appointment where they started talking about surgery in more detail. That’s when I told them to just take the boob off completely. ‘

Though a lumpectomy operation was an option, Sacha wanted a mastectomy to remove her left breast and the tissue.

She explained: ‘I’ve always said that if I got cancer I’d just have my breasts removed.

‘At first I was worried that I wouldn’t feel attractive anymore while dating, but I don’t feel like that now.

‘And if the choice comes between that and losing my life, it’s a no brainer.

‘It was a big decision, but I was adamant about having the mastectomy.

‘I told my friends about my diagnosis a few weeks before my surgery. They were devastated for me. ‘

In June 2020, Sacha had the procedure and after recovering in July she started chemotherapy.

Losing her hair was one of the hardest things to come to terms with during the process of chemotherapy.

‘I think I was more concerned about losing my hair than my breast,’ said Sacha. ‘As a hairdresser, that was my worst nightmare. I’m very guarded about my hair.

‘I wore a cold cap which reduces your chances of hair loss. I think I lost about 50% of my hair but it started growing back while I was still on treatment, so I think the cap speeded up the process.

‘It was strange wearing a wig for the first time but I slowly got used to it. At first, I bought some cheap ones to check which styles I liked.

‘To begin with, I was trying so hard to find one that matched my natural color but it was impossible.

‘I gave up on that and got a blonde wig, which my all friends complimented.’

Sacha is now awaiting breast reconstruction surgery, which has been postponed due to the pandemic, but she hopes for it to take place in the next two years.

For now, she is just relieved to have been given the all-clear, having finished her radiotherapy treatment in March 2021.

Now she’s working with the Fashion Targets Breast Cancer campaign, which is supported by River Island this spring.

The campaign organisers argued her through Instagram and she was keen to be involved as a fashion lover.

Baroness Delyth Morgan, Chief Executive at Breast Cancer Now, said: ‘By purchasing an item from River Island’s Fashion Targets Breast Cancer collection, you’ll be “wearing something important” that not only looks stylish but helps ensure that the 600,000 women living with , through and beyond a breast cancer diagnosis in the UK get the support they need. ‘

You can shop the Fashion Targets Breast Cancer collection, online and in-store at River Island from May 6.

MORE: ASOS praised by shoppers for featuring model who wears a cochlear implant

MORE: Woman says her cat knew she had cancer and saved her life