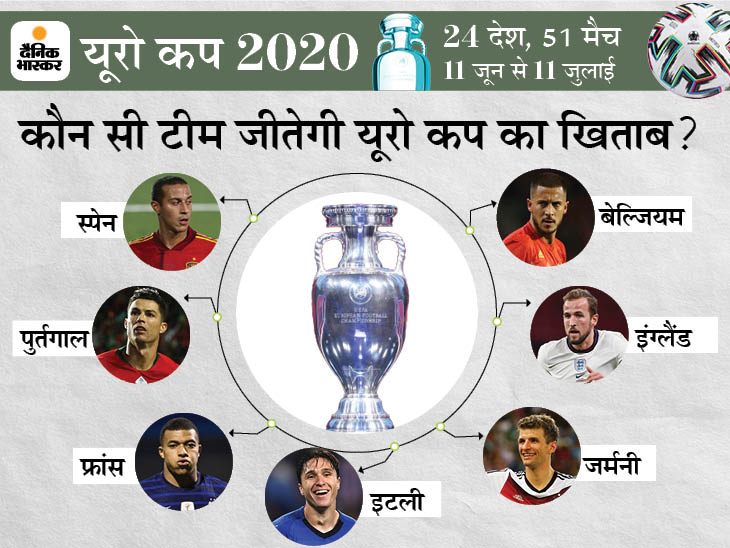 The 16th edition of Euro Cup is going to start from today. This time 24 teams will be face to face in the main tournament i.e. finals. All teams are divided into 6 groups of 4-4. The final will be played on July 11. This time the FIFA World Cup 2018 champions France, Spain, Italy and Germany can give a tough competition to the defending champions Portugal.

At the same time, the team of Belgium and England, full of star players, is being considered as underdog. Portugal’s team will expect a lot from captain Cristiano Ronaldo. We are telling you about the top-6 teams, who can win the Euro Cup trophy this year… 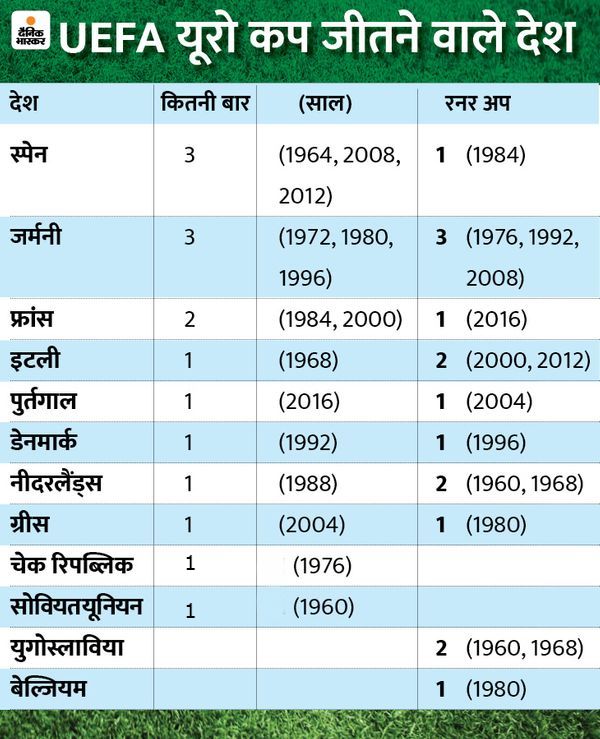 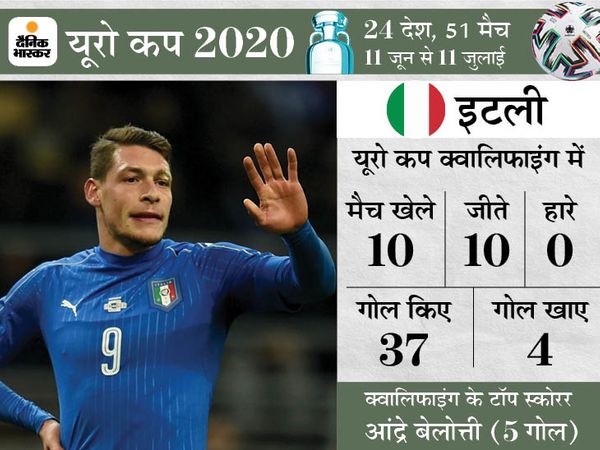 Italy last won the Euro Cup in 1968. Since then, this team is waiting for its second trophy. This time the wait for Italy may be over. In the 2016 Euro Cup, the team lost against Germany in the quarter-finals. Although this match was very close. Germany were defeated 6-5 in a penalty shootout after the match was drawn 1-1. Italy was the runner-up of the 2000 and 2012 seasons.

The team is in excellent form and won 10 out of 10 matches of Euro qualifying. Italy ended their qualifying campaign with a 9–1 win against Armenia. It was Italy’s record 11th consecutive win. Along with this, the team also made a record of registering 10 or more victories in a calendar year. Had the team scored another goal against Armenia, the record for the biggest win would have been created. Italy defeated the United States 9–0 in 1948.

Key player: Nicolo Barella, Player to watch: Federico Chiesa
Italy’s star midfielder Barella is an important part of coach Roberto Menchini’s formation. He was an important part of the Inter Milan team that won the Italian League Serie A. From tackling to technique, 24 years old Barela is a complete package.

Chiesa scored some great goals for Juventus this season. He must have learned a lot of tricks with Cristiano Ronaldo at Juventus. Chiesa scored a brilliant goal in the final of the Coppa Italia. In such a situation, he can prove to be an important player of Italy on the big stage. 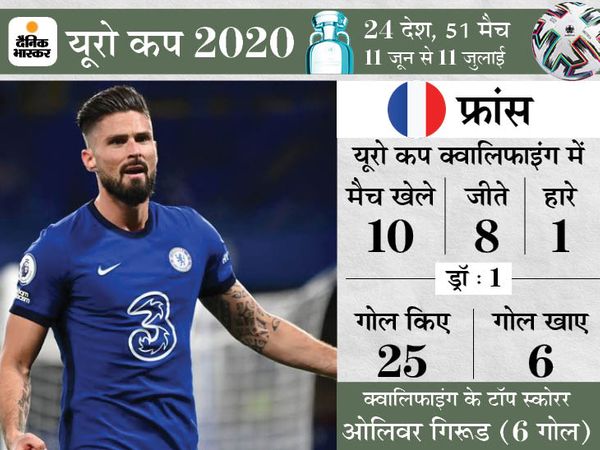 France, the 2018 FIFA World Cup champions, is considered to be a strong contender to win the Euro Cup this year. The team is full of star players. There are many star players like Paul Pogba, Oliver Giroud, Kylian Mbappe, Antonio Griezmann, Pavard. France had lost the final 1–0 to Portugal in the previous tournament. The team has been Euro Cup champion twice in 1984 and 2000.

This is France’s 13th finals tournament. The team has qualified for every FIFA main tournament since the 1994 World Cup. During this, the team has reached the final 5 times and won 3 times. The team won 8 out of 10 matches in the Euro Cup qualifiers. 1 match was lost and 1 match was drawn.

Coach Didier Deschamps led France to victory in the 1998 World Cup and Euro 2000 as captain. He has won the 2018 World Cup since becoming the coach of the team in 2012 and would now like to win the double trophy by winning the Euro Cup.

Key Player: Mbappe, Player to watch: Kingsley Koman
Mbappe, a star striker known for his speed and dribbling, can trouble the opposition teams. At the same time, Koman can give balance to the team as a winger. 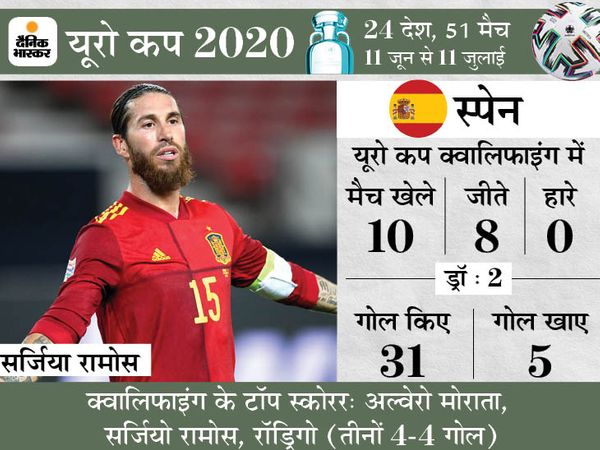 Spain is the only team in Europe to have won the Euro Cup tournament twice in a row. He did this feat in 2008 and 2012. Apart from this, the team has also won the title in 1964. In 2016, Spain had to face defeat in the round of 16. Italy was then defeated 2–0. However, many players of that team have now retired. This year there is a whole new team and all the players are looking very talented.

Spain forced Ronaldo’s team to struggle without star players in a friendly match against Portugal a few days ago. There are some experienced players in Pedro, Coke and Tiago Alcantra and the team can win the title for the fourth time. In the qualifiers, Spain won 8 out of 10 matches and drew 2 matches.

Key Players: Gerard Moreno, Players to watch: Pedri and Pablo Sarabia
Running in the best form of his sports career, Morena will be the key player of the team. It will not be easy for the opposition team to stop this number 9. At the same time, Pedri has been recognized for his excellent match reading skills at the age of 18. This midfielder is highly respected in the Barcelona club. Spain coach Luis Enrique considers Sarabia the most important player in the team. 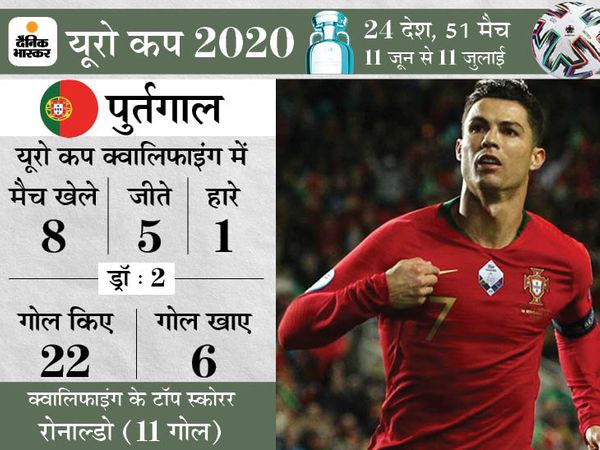 The first objective of all the teams will be to beat the defending champions Portugal of the Euro Cup. This team became the champion in 2016 by defeating a strong team like France at its home ground. The team has a charismatic captain and star striker like Cristiano Ronaldo. He also scored his 104th goal in the friendly match against Israel on Wednesday.

Portugal’s team lost the match against Ukraine in 2019. It was Portugal’s first defeat in Euro Cup or Nations League qualifying or finals since Fernando Santos took over as coach in 2014. The team won 5 out of a total of 8 matches in the Euro Cup qualifiers and lost 1. 2 matches were drawn. Ronaldo’s team can surprise everyone this time after Spain to become the second team to defend the Euro Cup.

Key Players: Ronaldo, Players to Watch: Joao Felix, Bruno Fernandes
Ronaldo scored his 104th goal in Wednesday’s match against Israel. He is just 5 goals away from Ali Dei’s record for most international goals (109 goals). At the same time, after scoring 1 goal in the tournament, he will become the highest goalscorer in the Euro Cup tournament. Ronaldo was the team’s highest goalscorer in the Euro Cup qualifiers. At the same time, Felix and Bruno can help Portugal to become champions again. Both these players were in excellent form for their respective clubs. 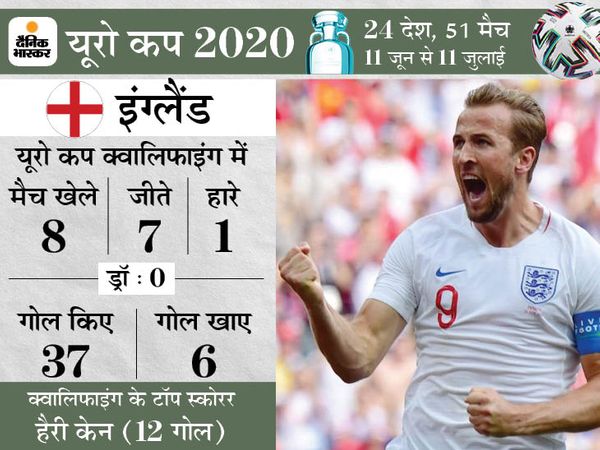 England, the semi-finalists of the 2018 FIFA World Cup, are a strong contender to win the Euro Cup. The team has to play all its group matches at Wembley Stadium in London. There, the team lost only 2 out of 23 matches under the guidance of their coach Southgate. This match was against Spain and Denmark. In the Euro Cup qualifiers, the team won 7 out of 8 matches. Lost in 1.

The team has not won a single Euro Cup yet. Best performance was in 1968, third place. In 2016, the English team was knocked out in the round of 16 after losing 2–1 to Iceland. However, this time the team has a good mix of young and experienced players. In such a situation, the team can lift its first trophy. The team also has a great captain in the form of Harry Kane.

Key Player: Harry Kane, Player to watch: Jude Bellingham
The 34-year-old Tottenham Hotspur striker Harry is a brilliant captain as well as a scorer and a creator. He scored 33 goals and made 17 assists for Tottenham in the 2020/21 season. In the Euro Cup qualifiers, Harry was the team’s top scorer with 12 goals.

At the same time, Jude of German club Borussia Dortmund is considered one of the star players of the coming times. He had a stellar performance in the quarterfinals against Manchester City in the UEFA Champions League. If all goes well in the group, Jude can celebrate his 18th birthday in a round of 16 match. 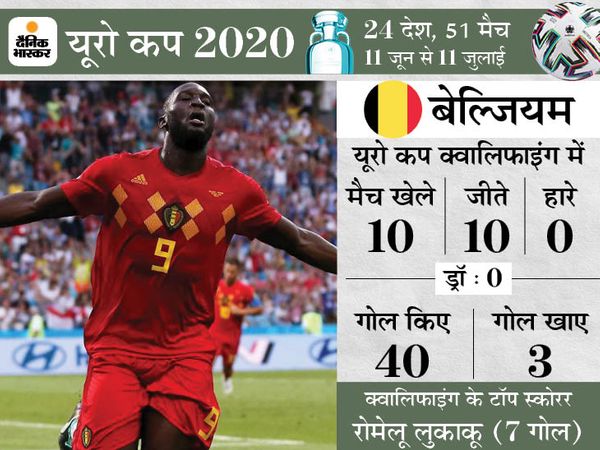 The world’s current number-1 football team Belgium can lift its first Euro Cup this year. The team is in excellent form. It won 10 of the 10 matches of the qualifiers. In 2016, Belgium reached the quarterfinals, where they were beaten 3–1 by Wales. However, this time the team has some great playmakers and strikers.

The team has players like Kevin De Bruyne, Yuri Tillmans, Eden Hazard, Romelu Lukaku, who can turn the match at any time. At the same time, there is also a star goalkeeper like Thibaut Courtois, who is known for his brilliant saves. Belgium’s best performance was in 1980, when the team was runner-up. The team has performed brilliantly since Roberto Martinez took over as coach in 2016. Hopefully this time Martinez’s team will be able to win the first trophy.

Key Player: De Bruyne, Player to watch: Yuri Tilmans
De Bruyne is an important part of the team’s strategy. He was the midfielder of the season in the 2019/20 UEFA Champions League season. At the same time, he was instrumental in taking Manchester City to the final in the 2020/21 season. Bruin scored 3 goals and 4 assists in 7 matches in this season’s Champions League.

Click here to know the schedule of Euro Cup…

2022 edition will be my last World Cup: Mithali Raj