Kordinate
Home News Sports MI vs SRH match today: Rashid’s challenge against Rohit, who has been... 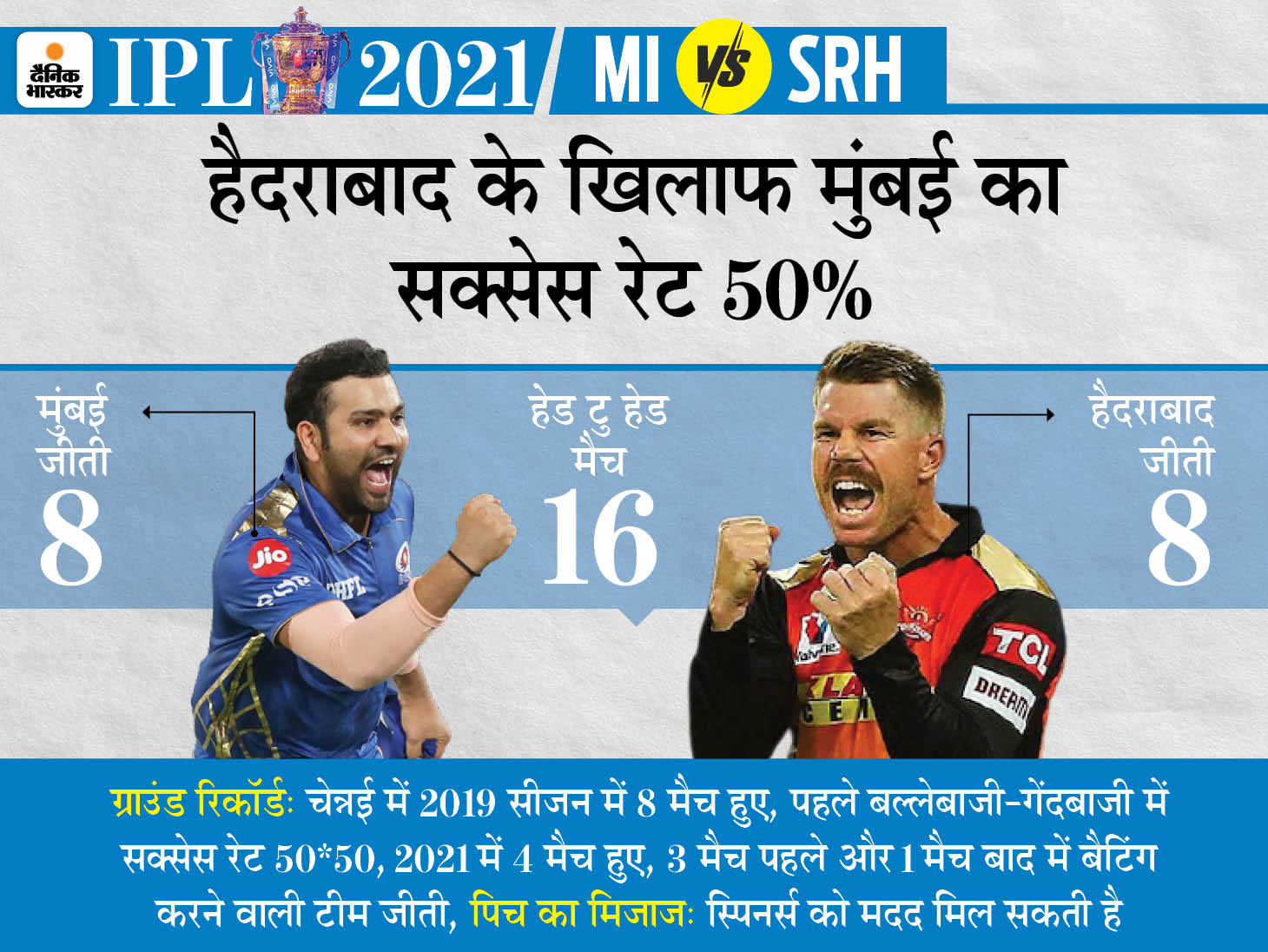 The match between Mumbai Indians (MI) and Sunrisers Hyderabad (SRH) will be played today in the 9th match of the IPL 2021 season. The match will start at 7:30 pm at Chepak Stadium, Chennai. On the turning track of Chepak, Hyderabad captain Rohit Sharma will face Hyderabad’s Rashid Khan. Rohit is seen struggling in front of wrist spinners in IPL. He has been dismissed by wrist spinners 17 times in the league. At the same time, Hyderabad captain David Warner will face the challenge of choosing the right playing-11 and combination.

Mumbai has played 2 matches so far this season. The team had to face defeat in front of RCB. At the same time, the MI team won the match against KKR thanks to Rahul Chahar, Krunal Pandya and Trent Boult. Hyderabad had to face defeat in both their matches this season. There have been 16 matches in this league between MI and SRH. Out of this, both the teams have won 8-8 matches. 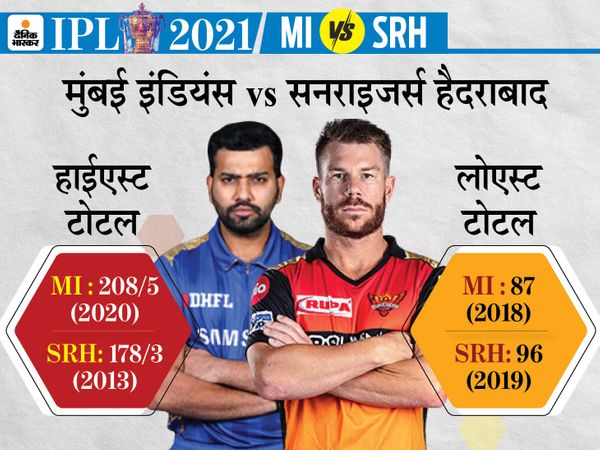 All failed, except 3 batsmen from Hyderabad
Talking about the SRH team, apart from Captain Warner, Johnny Bairstow and Manish Pandey, none of the team’s batsmen have been able to score runs. Bairstow scored 67 runs in 2 matches, Pandey scored 99 runs in 2 matches and Warner scored 57 runs in 2 matches. At the same time, in bowling, Rashid and Holder are the team’s highest wicket takers this season. Wriddhiman Saha, Vijay Shankar, Abdul Samad are in poor form. At the same time, Bhuvneshwar Kumar and T Natarajan have not been able to do anything special with the ball so far.

Priyam Garg may get a chance in place of Saha
Warner’s team still has to open a winning account this season. In such a situation, they would like to get off with the perfect combination. Saha can be placed on the bench in this match. Priyam Garg may return to the team in his place. In such a situation, Warner and Bairstow can come to open. Kane Williamson is not fit at the moment. Apart from this, Kedar Jadhav or Abhishek Sharma can be included in the team in place of out-of-form Vijay Shankar. 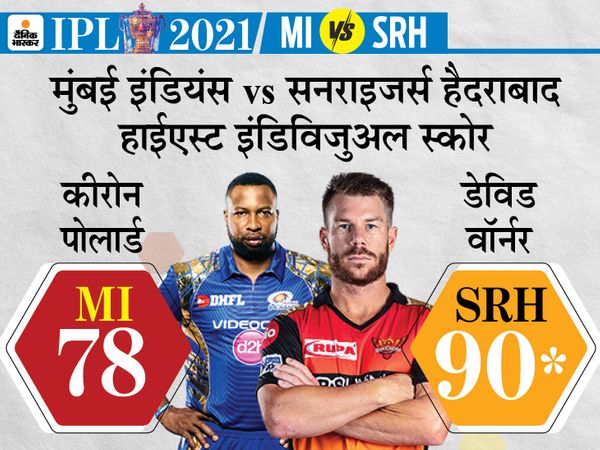 Hyderabad’s batting failed against Bengaluru
In the last match against Bengaluru, SRH needed 35 runs in the last 4 overs. But the team could only score 28 runs and lost 7 wickets during this period. In such a situation, the team will have to bring more strength in batting. The SRH team has been the most consistent team of the last 5 seasons. She has also reached the playoffs for the rest of the season along with lifting the IPL Trophy in 2016. In such a situation, with the victory in this match, this team would like to return to the tournament. 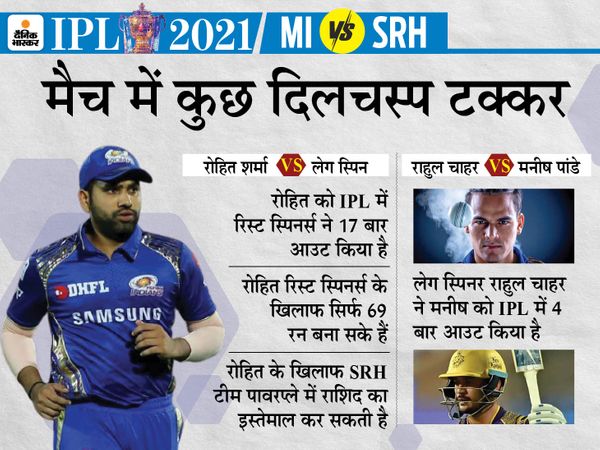 MI bowled well in the death over against KKR
At the same time, the Mumbai team defended the small target brilliantly in the last match against Kolkata Knight Riders. The MI team was all out for 152, batting first. In response, the Kolkata team needed 31 runs in the last 5 overs to win. At that time, Dinesh Karthik and Andre Russell were present at the crease, but could not win the team. Bowling in Mumbai’s death over was fantastic. In such a situation, the team would like to retain the momentum of victory. 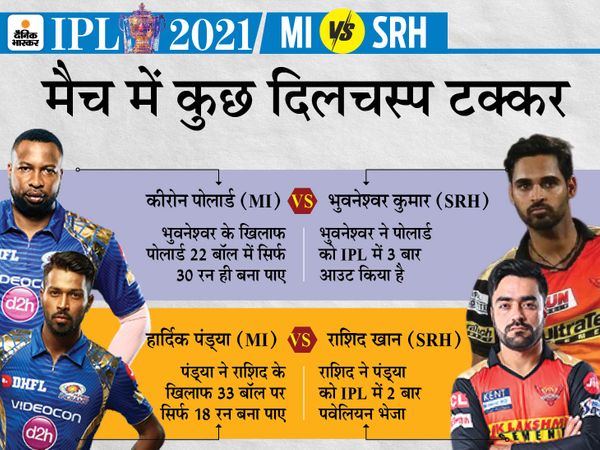 MI will come down to improve the success rate against SRH
Rohit would not like to change to playing-11. In batting, he and Suryakumar Yadav are in excellent form. Whereas, in the previous match, Hardik Pandya and Krunal Pandya also played small, important innings of 15-15 runs in the lower order. In such a situation, the 5-time champions Mumbai team would like to improve their success rate against Hyderabad by winning this match. 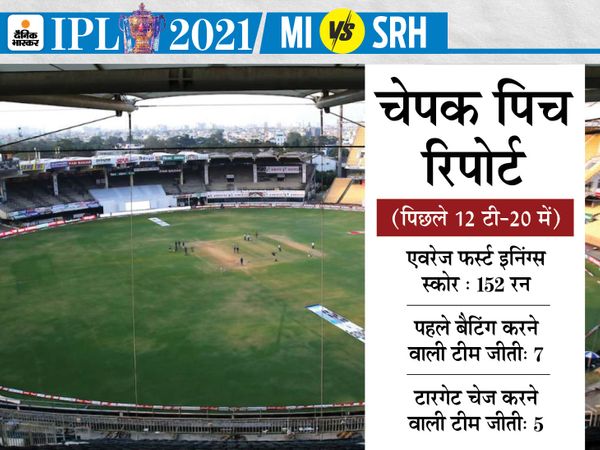 Talking of the pitch, the pitch at Chepak Stadium has been helpful to the spinners lately. Although this time the pitch preparation has been done under the supervision of IPL instead of Chennai Super Kings, it is still expected that the spinners can show amazing here. Rahul Chahar and Rashid Khan bowled well in the last match. There have been 4 matches on this ground so far this season. The team batting first was able to win only 3 and the team batting later. A total of 62 wickets have fallen on this pitch in the 14th season. Out of this, the spinners have taken 20 wickets.

Virat is the third Indian to captain in 200 matches: won...