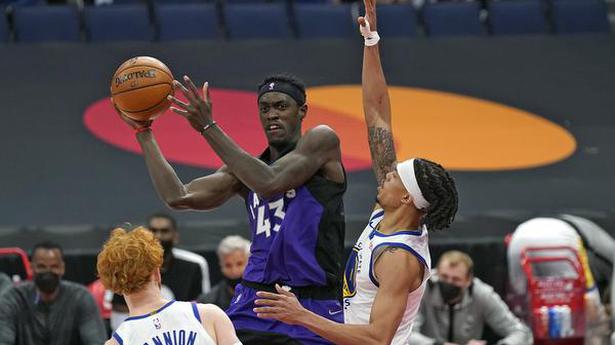 
Pascal Siakam celebrated his 27th birthday scoring a season-high 36 points as Toronto Raptors won the most lopsided game in franchise history with a 130-77 route of Golden State Warriors on Friday.

The Raptors won by 53 points and led at one point by 61 as they handed the short-handed Warriors their third worst loss ever and the sixth defeat in their last seven contests.

With Stephen Curry and Draymond Green sitting out, the hapless Warriors looked out of sorts. Curry was expected out hours before tipoff with a bruised tailbone and Green was scratched with a sprained finger.

Elsewhere, Giannis Antetokounmpo scored 47 points on 18-of-21 shooting from the floor and grabbed 12 rebounds as Milwaukee Bucks breezed to a 127-109 win over Portland Trail Blazers.

Antetokounmpo also had three blocks in posting his third 40-point performance of the season as the Bucks beat the Trail Blazers for the fifth straight time.

The loss snapped the Trail Blazers’ four-game winning streak and was just their third defeat in the past 10 games.

The Mavericks were without head coach Rick Carlisle who had tested positive for COVID-19 despite receiving the vaccine shot in January. Carlisle was scheduled to coach in his 1,500th game on Friday.

How otters and beavers returned to one of the world’s greatest...

IPL 2021 | Anrich Nortje out of quarantine after false...