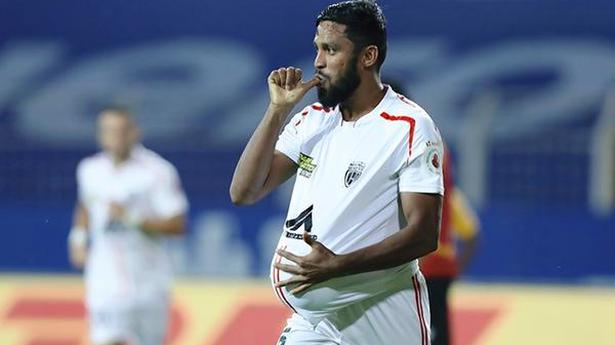 
NorthEast United FC (NEUFC) brightened its chances of making it to the playoffs by downing a 10-man SC East Bengal 2-1 in a 19th round fixture of the Indian Super League at the Fatorda Stadium on Tuesday.

After a barren opening half, VP Suhair gave NorthEast the lead with his first ISL goal. East Bengal defender Sarthak Golui scored an own goal to double NEUFC’s lead but later scored to pull one back for his side.

The opening half was a bit disappointing for NEUFC as it failed to make much of an impression in the opposition box. East Bengal, already out of the title contest, fielded a team with number of players from the bench.

NEUFC was a changed side after the break and it started pressing the East Bengal defense with more purpose.

It found the lead in the 48th minute when wing-half Imran Khan played nice through pass to find Suhair inside the box.

The forward produced a nice finish as he shielded his marker, took a half turn and sent an angular left-footer into the East Bengal net.

With the deadlock broken, NEUFC’s lead was doubled in the 55th minute when Nim Dorjee delivered a cross on the East Bengal goalmouth to see Golui miscuing an attempted clearance into his own goal.

East Bengal suffered another blow in the 71st minute when defender Raju Gaekwad was sent off for his second booking of the match.

Golui redeemed his mistake in the 87th minute, nodding home a Surchandra Singh free-kick but his effort came a bit too late.

ICC will get written assurance from BCCI by March regarding issuance...