Kordinate
Home News Sports Not such a special relationship: US owners’ checkered history of investing in... 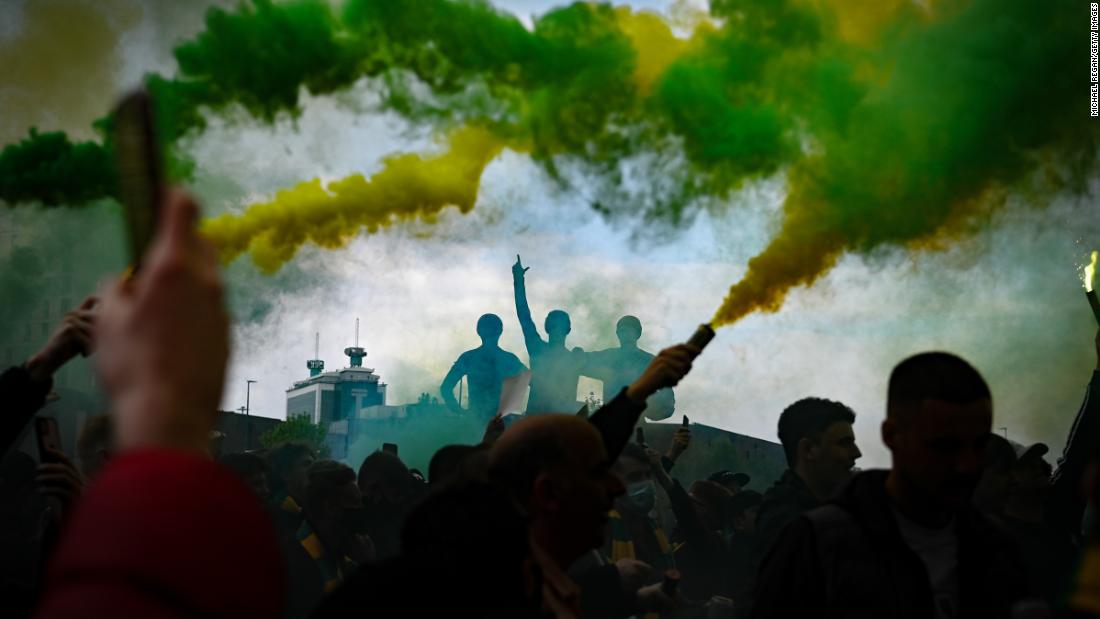 “I’m not sure the people who are in that club now know what the club is all about.”

Sunday’s postponement of the game between Manchester United and Liverpool due to fan protests – that at times turned ugly – brought into sharp focus the dissatisfaction of many supporters over the way the Glazer family have run the Premier League’s most successful team.

Police estimate over 1,000 protesters invaded the pitch at United’s Old Trafford stadium ahead of the match against Liverpool.

Some 200 people also congregated outside The Lowry Hotel, Salford where the United players were staying ahead of the match, to protest against the club’s US owners.

In response to the protest, Manchester United issued a statement, saying: “The club has no desire to see peaceful protestors punished, but will work with the police to identify those involved in criminal activity, and will also issue its own sanctions to any season ticket holder or member identified … We remain committed to dialogue and engagement with our fans through the Fans forum and other appropriate channels. ”
United fans’ discontent with the Glazers has intensified after six of England’s top clubs signed up last month to join the European Super League (ESL) – a multibillion dollar competition consisting of 12 of the biggest teams in European football. Manchester United was one of the 12 clubs.

Although the venture fell apart less than 48 hours after it was first announced, the lack of fan consultation galvanized many supporters – not just at United – who are intent on wresting back some semblance of control they pay good money to watch.

The six founding Premier League members eventually withdrew from the ESL, beginning with Chelsea and Manchester City, following widespread criticism by fans, the media, politicians and even royalty.

The involvement of Arsenal and Liverpool in the failed Super League project has also sparked discontent among fans for their respective owners, Kroenke and Henry – along with Liverpool’s chairman, Tom Werner.

Arsenal, for example, charges fans up to $ 132 to attend a game.

On Monday, the Premier League issued a statement saying it recognized “the strength of feeling and the right of fans to know what is happening” when addressing the Old Trafford protests.

“We are committed to joining close dialogue with supporters and their representatives, as we work with the FA and Government to identify solutions, but ask that all protests are peaceful,” added the statement.

CNN has reached out to the Glazer family, Kroenke and Henry for comment.

READ: ‘You’re not, you can’t, and I was always, I can, and I will’: Isha Johansen on rise to FIFA’s corridors of power

Since taking over Manchester United in 2005, the Glazer family – which also owns the NFL’s Tampa Bay Buccaneers – has never really won fans over.

“After sixteen years not one member of the Glazer family has ever had so much as a conversation with us,” said the Manchester United Supporters Trust (MUST), a group of more than 200,000 club supporters, said in a statement on Monday.

When the Glazer family took over the club, fans who spoke to CNN feared it would be saddled with debt and that the family was interested purely in its brand, rivaled only by Real Madrid, and revenues. Manchester united was a debt-free club before the Glazers bought the team.

The Glazer’s priority is success on the pitch and the family can point to net investment of $ 240.3 million (€ 200m) in player acquisitions over the past two years which is more than any other major European club. It has totaled over $ 1.081 billion (€ 900m) since 2013.

Sunday was the first time United fans staged a protest. In 2010, MUST organized a protest in which fans wore green and gold scarves to games, the club’s original colors – ditching the ironic red and white neckwear.

While the Glazers point to a meteoric uptick In the club’s commercial revenues, MUST is calling for a more fan-oriented ownership model after Sunday’s protests.

In its Monday statement, MUST outlined a four-point plan to “rebalance the current ownership structure in the favor of supporters,” demanding a response from the Glazers by Friday.

Part of that plan called for a “share scheme” which would give fans similar voting rights to the Glazer family.

One of the points includes Manchester United fans being offered the opportunity to buy Glazer family shares in the club until they have been “reduced to a minority or indeed being bought out altogether.”

That type of model is a nod to the 50 + 1 ownership rule prevalent in German football, where external investors and commercial partners – such as Audi or Adidas – are not allowed to gain control, instead ensuring members, often also fans, retain majority ownership of clubs.
READ: ‘When we come together it’s powerful,’ Thierry Henry says of social media blackout

Genie out of the bottle

While Manchester United and the Glazers are currently in the spotlight, fans have directed their anger at other US-based owners in recent weeks due to their participation in the ESL.

At Arsenal, protests a few weekends ago took place outside the Emirates Stadium in London demanding Kroenke sell his shares in the club.

Although Arsenal fan and Spotify founder Daniel Ek announced his intention to submit a bid for the club, Kroenke has insisted there’s no intention to sell.

At Liverpool, which has prided itself on the close connection to its fans – symbolized by a slogan “This Means More” – the news that the club had signed up for the ESL was not well received.

Subsequently, in a video posted on Liverpool’s social media, club owner Henry, thought to be one of the principal drivers behind the Super League, cut a contrite figure.

“Over these last 48 hours, you were very clear that it would not stand. We heard you. I heard you. And I want to apologize to Jurgen [Klopp, manager], Billy [Hogan, CEO], to the players and to everyone who works so hard at Liverpool to make our fans proud, “Henry, owner of MLB giants Boston Red Sox, said.” They have absolutely no responsibility for this disruption.

“They were the most disrupted, and unfairly so. This is what hurts most. They love their club and work to make you proud every single day. I know the entire Liverpool team has the expertise, leadership and passion necessary to rebuild trust and help us move forward. ”

Joseph DaGrosa, a US investor and chairman of Kapital Football Group who has been in ownership discussions with Premier League clubs in the past, says current owners have run into trouble by “look[ing] at club ownership like owning any other business – that is, with a profit motive foremost in their minds ”

“We never believed the Super League would move forward because we knew it wouldn’t never get the support from fans,” DaGrosa told CNN Sport.

“While we weren’t at all surprised by the actual response from fans, we have been surprised at how quickly the situation escalated and the protests that have taken place.”

Some would like to see different owners at their clubs, while others would like to see the 50 + 1 ownership model used in Germany to be implemented in the UK, but the message is clear: no more to the perceived asset stripping of clubs, or owners that are solely focused on revenue generation.

Whether the UK government would intervene to implement legislation to alter the fabric of football ownership laws remains unclear.

However, what the last few weeks have shown is that the genie is out of the bottle – fans want to see these English clubs genuinely listen to them.

The man who batted for women’s cricket