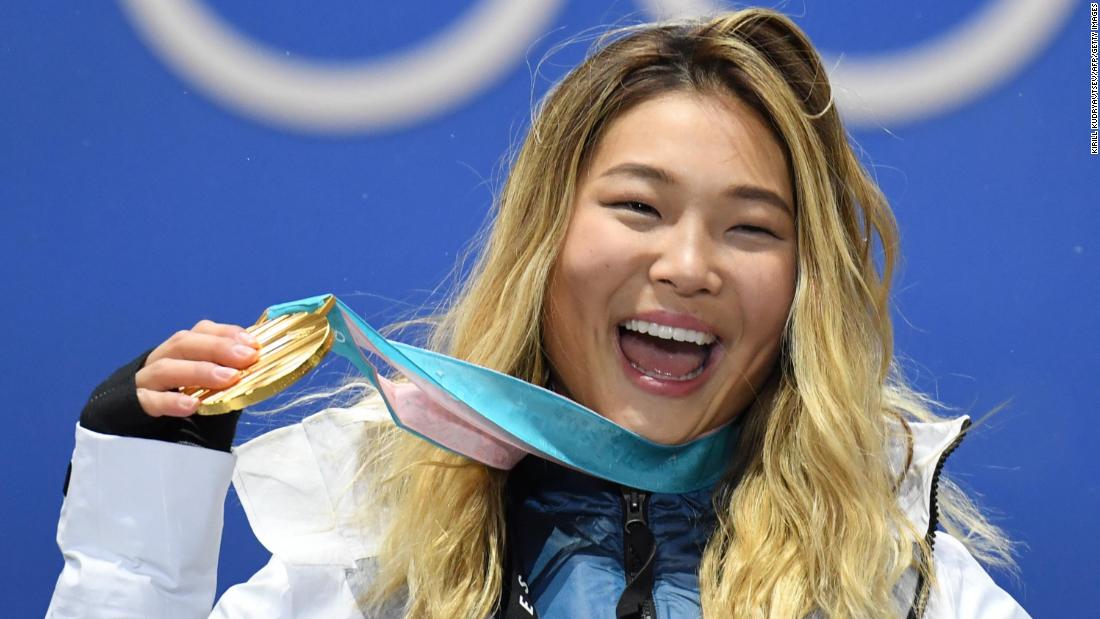 If figuring life out at 19 can be daunting, it’s equally ambitious to reach the pinnacle of your sport and put it aside to pursue an Ivy League education.

Kim says she was delighted to receive her acceptance letter from her “dream school” and the initial trappings of fame soon worn off as she settled into student life.

“I thought it was going to be challenging to make friends because of that,” Kim acknowledged as she reflected on the transition to Princeton.

“But I honestly met some amazing people. And it’s funny because a lot of my best friends from school had no idea who I was.”

‘Present and future of women’s snowboarding’

In the year of her Olympic triumph, Time Magazine listed Kim in their Time 100: The Most Influential People of 2018, but her rapid ascension to stardom was a surprise to the young woman from Long Beach.

“I kind of just expected to go there and compete and then just come back and go back to my normal everyday life. But that was not the case.”

At the 2018 Olympics some commentators described the then 17-year-old Kim as “the present and future of women’s snowboarding.” She subsequently discovered that when you are front and center of that type of media exposure it can lead to some interesting encounters.

“It’s so funny because I’ll be walking somewhere and there’s like someone … ‘Oh my gosh, are you that snowboarder?’ says Kim. “I was at the grocery store yesterday and they’re like, ‘Oh, my God, is that you?’

“It’s just funny, you know, because I never expected that to happen from snowboarding.”

Shortly after her Olympics win, Kim appeared as a guest on NBC’s The Tonight Show and was shocked by host Jimmy Fallon, who unveiled a blown-up replica of a Gold Medal Edition box of Kellogg’s Corn Flakes with her on the cover, smiling and holding her gold medal.

When she next visited her parents’ house, Kim found they had bought the boxes of cereal in bulk.

“I’m pretty sure they bought about 40 of them,” Kim says. “Because they were like, this is the best gift to anyone!”

Her parents, according to Kim, are her biggest fans.

Originally from South Korea, the story goes that her father, Jong Jin Kim, emigrated to the US in 1982 with only $ 800 in cash, and as his daughter’s talent emerged, gave up his job to help her travel around the globe as she chased her snowboarding dreams.

“My dad gave up so much,” says the 20-year-old Kim. “He came with so little and he sacrificed everything for me to help me pursue this dream of mine.”

“If things didn’t go well, I might not be able to continue snowboarding after I was 13 because it was straight up just too expensive for us because we’re competing in like Aspen and Vail, Colorado and Switzerland; like we ‘ re doing all these trips and it’s expensive.

“My parents put everything into me and my career, I guess, and it worked out, and I’m so thankful every day.”

That parental support and sacrifice perhaps helps explain why Kim is so driven to be the best in everything she does.

“It’s taught me that if you believe in something, then to never give up. I was like seven years old when I started competing in snowboarding, rookie events and stuff, and the fact that they saw that and believed in me and believed that I could become like an Olympian one day is just insane.

“The fact that I did it when I was 17 is just even crazier.

“There were a lot of struggles along the way, too,” she added. “There was a lot of pressure. And so I just think, like even though times get tough, rough sometimes, [it’s important] to keep going, to keep pushing.

“And they’ve also taught me that, like, when I have kids of my own one day to just support them in whatever they’re passionate about because I love snowboarding and then this happened.”

Schools out for snowboarding

Looking ahead to the Winter Olympics in Beijing next year, student life is on hold as Kim recently returned to the sport she loves, winning her fifth X Games title in January.

Her focus is on “getting back in snowboarding shape,” and aside from suppressing her craving for sweets, it’s a welcome change for someone who, quite noticeably likes to keep busy.

“I’m so, so happy and grateful that I’ve been able to come back and compete again against all of these amazing, talented, hardworking women,” said Kim. “It was nice to kind of get out and start competing again.”

Kim admits that it’s a demanding schedule in the countdown to the games and combining it with Princeton was not going to help her chances of success.

“I got a leave of absence,” she said. “There’s no way I can handle going to school while being a professional snowboarder, especially before the Olympics.

“I plan on going back, but right now, I’m a full-time snowboarder and one day I’ll be back to being a full-time student. But, yeah, I don’t think I can juggle it.”

Asked whether she believes the Summer Olympics in Tokyo and the Winter Olympics in Beijing will go ahead, Kim is staying positive, having emerged from lockdown to compete in recent events made safe by strict protocols.

“It’s every person’s responsibility to be safe,” she emphasizes. “And I think all the athletes, especially at the Olympics, will be very respectful and aware of that.

“They have to be responsible for their own actions, and, you know, if someone gets it, then they go home, and I don’t think any athlete wants to risk that at the Olympics. You wait four years to be there.

“So I really think it will be able to happen very smoothly, honestly.”

The International Olympic Committee recently outlined safety measures for the Tokyo Games that included no shouting or cheering, alongside the need for masks and social distancing.

It’s a small price to pay, says Kim, as the joy of the games and the opportunity for athletes to compete after years of hard work is worth putting up with any extra restrictions.

“I think everyone will be so happy and grateful that the Olympics were able to happen in the first place. So what if people can’t shout or scream or clap or hug or high five or whatever. So be it.

“We’re able to compete at the Olympics, we’re able to have an Olympics, and I know for a fact that none of those athletes want to wait another four years just because they couldn’t high five or clap or whatever.

“So I think that, you know, they’re there to compete at the Olympics, represent their countries and support each other, and if you have to do that from a distance, then that’s fine. You feel the love. Everyone’s going through it. “

Spinners can get help in Motera: Rohit said – Pace friendly...

City Girls to Reportedly Release a New Album This Summer