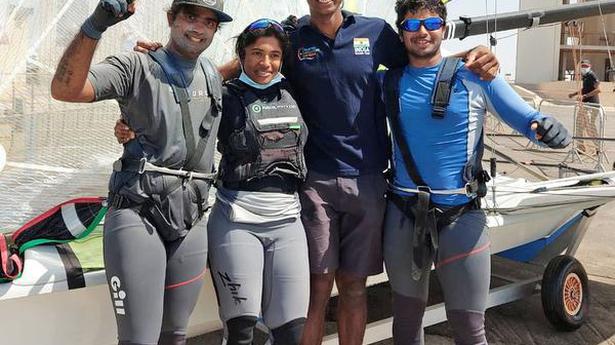 
The pair of Varun Thakkar and KC Ganapathy, along with Vishnu Saravanan, qualified for the Tokyo Olympics in the 49er and laser standard classes respectively from the Asian Olympic sailing qualifiers that took here on Thursday.

The Varun-Ganapathy duo, which had to finish in the top six in the medal race to make the grade, did so by finishing fourth and first overall.

Meanwhile, Nethra Kumanan officially qualified for Tokyo by finishing sixth in the final race to end up second overall and first among Asians in the laser radial class. Emma Charlotte Savelon of the Netherlands took the overall honors.

Ramya Saravanan, too, had a chance to make it to Tokyo had she finished behind Nethra in overall standings. Placed overnight third overall and second among Asians, Ramya ended up in eighth place in the medal race and finished sixth overall, thereby missing the bus.

“We got the result we wanted. All our hard work has paid off. We are grateful for all the people who supported us. It was a shaky [final] race, but we did it. Now the work starts, ”said Varun and Ganapathy.

Vishnu, who had to finish first in the medal race to make the grade, said “I was nervous and emotional before and after the race. During the race, I was telling myself ‘Vishnu, be in the present’. It feels great to be part of history. ”

The event, called the Mussanah Open, offered two Asian qualification spots each in the laser radial and laser standard classes and one in the other classes.