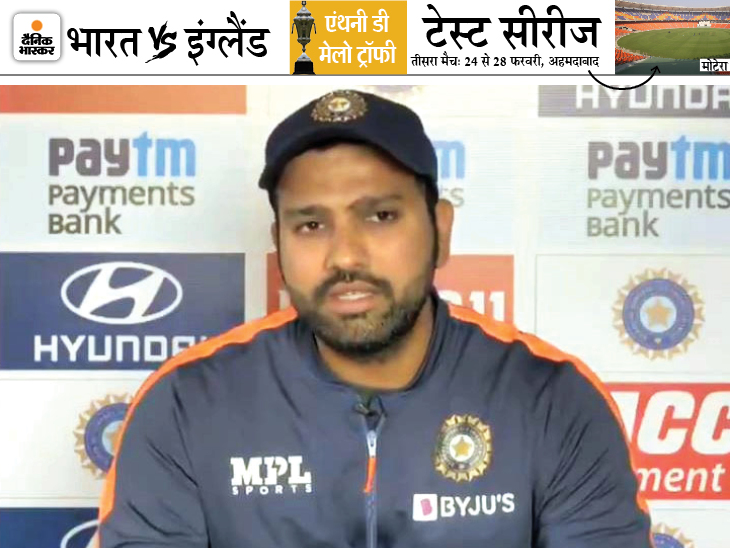 Rohit Sharma during the press conference. BCCI shared this video. Rohit has scored 205 runs in 2 Tests against England at an average of 51.25. This includes 1 century. He scored 161 runs in the first innings of the second Test.

Indian opener Rohit Sharma has said that pitches in Motera can help spinners. He also asked the experts to leave rhetoric about pitches and concentrate on the game. Rohit said the pitch is the same for both teams. I don’t know why people make it an issue. Similar pitches have been seen in India for many years.

He said, ‘When we go abroad, then why does anyone say anything about pacers friendly wicket? This is the advantage of Home and Away (foreign soil). We make pitches according to us. If anyone has problems, he can ask the International Cricket Council (ICC) to make rules about it, so that the same pitch is found everywhere.

Lights will focus on practice session on Monday
Rohit said that like the second Test, the spinners will benefit from the very first day. Day-night test is a bit difficult, but Team India will adapt accordingly. In the practice session on Monday, we will focus on lights and seats. This is because the new seats have shining. Slip catches and outfield catching will also be practiced.

India-England test series is on 1-1 draw
The third Test (Day-Night) between India and England will start on 24 February. The series is currently 1–1. India must win one of the next 2 Tests to reach the final of the World Test Championship. At the same time, the next test will have to be drawn at least. Rohit said on this that we should focus on the process and not think ahead.

Team India’s focus on World Test Championship
Rohit said that if you think more, you push yourself into pressure. Therefore, there is no pressure on living in the present. Tests are a 5-day game and in every session, the pressure on different teams increases. If you pay attention to small things, then the result will be in your favor. We want to qualify for the WTC Finals. We have 2 tests in front of us and our entire focus is on that.

Rohit is the second highest run-scorer in the series
In this series, Rohit has scored 205 runs in 2 Tests at an average of 51.25. This includes 1 century. He is the highest run-scorer after English captain Joe Root. Rohit had scored 161 runs in the first innings of the second Test. Root has scored 297 runs in 4 innings at an average of 74.25. It also includes a double century.

Bhaskar Interview: SRK got its name due to SRK, the all-rounder...