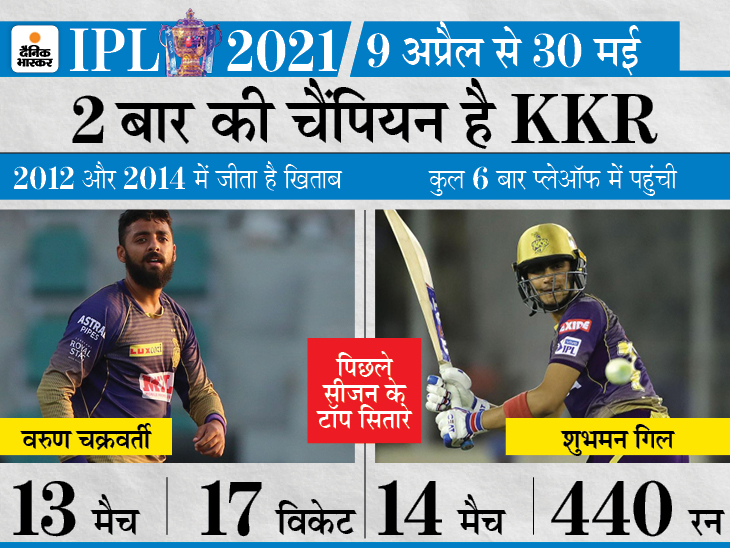 Two-time IPL champion Kolkata Knight Riders would like to win the trophy after ending a 7-year drought this year. The team last won the title in 2014. The team looks quite balanced this season as compared to the 13th season. The squad has been strengthened by the presence of 7 all-rounders in the squad, including Andre Russell, Sunil Narine and Shakib Al Hasan.

However, the fitness and form of the team’s spinners can cause trouble. Harbhajan Singh is 40 years old. At the same time, Kuldeep Yadav is not in form at the moment. Varun Chakraborty’s fitness has always been questioned, but despite this, he was the team’s highest wicket-taking spinner in the last season. Since Gambhir’s departure, the team has not been able to perform anything special.

Last season, the team struggled in terms of opening combinations, middle order and finishers. This time the team has to play their first match against Chennai on 11 April. In the middle season, Dinesh Karthik was replaced and England’s ON Morgan was made the captain. Despite this, they could not make the team to the playoffs. Know about the strength of the KKR team, Weaknesses, Opportunities and Threats … 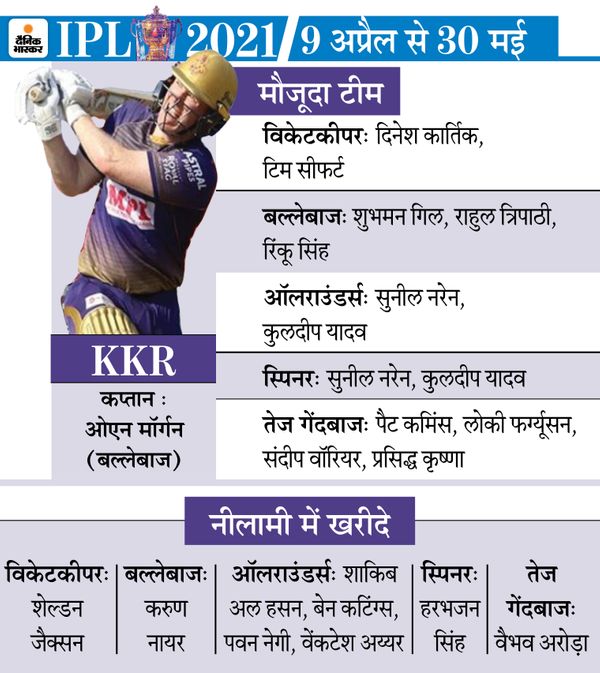 Strength-1: Captain like ON Morgan
Morgan will be seen as a full-time captain in the IPL for the first time. He is currently considered one of the smartest captains in the White Ball format. He won the 2019 ODI World Cup to England under his captaincy. Last season, KKR was handed the captaincy after a poor performance in the first 6 matches. Morgan had scored 418 runs in 14 innings at an average of 41.80 in the 13th season. During this, he hit 24 sixes.

KKR took informed decisions in the auction this year. KKR bought 8 great players for almost half the amount of money that Rajasthan added to Chris Morris. These include all-rounders like Shakib Al Hasan and Ben Cutting, batsmen like Karun Nair and experienced spinners like Harbhajan Singh.

Strength-2: Depth in batting order
The arrival of Shakib has deepened the team’s batting. The top order has batsmen like Shubman Gill and Rahul Tripathi. After this, the middle order is quite strong due to the stay of Nitish Rana, Dinesh Karthik, Morgan and Shakib. Russell and Naren are also known for aggressive batting in the lower order. Such a batting line up can cause problems for any team. 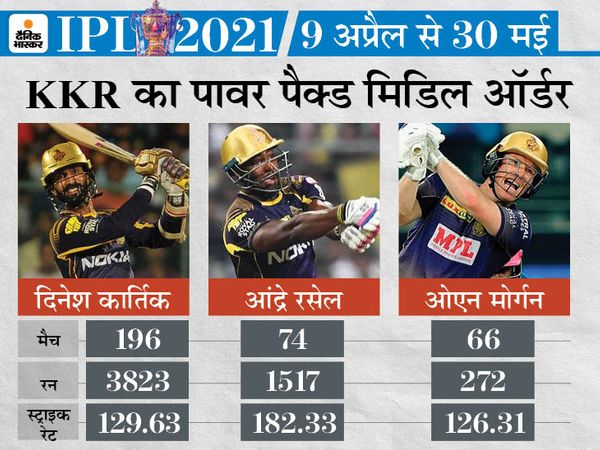 Strength-3: 3 bowlers bowling at a speed of 145+
KKR also has a famous Krishna-like fast bowler. Krishna made history by taking 4 wickets in an international debut in one-day against England. He is the highest wicket taker in debut ODI.

The team also has options such as Pat Cummins and Lockie Ferguson as backups. These three bowlers can bowl at a speed of 145+. Ferguson took 6 wickets in 5 matches last season. He won the team with 2 wickets in the super over against Hyderabad. 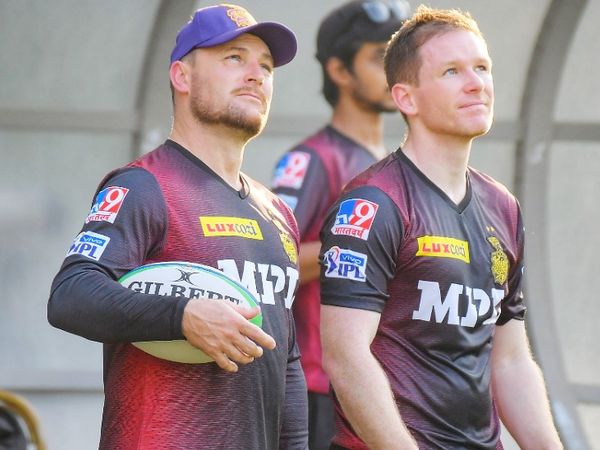 KKR coach Brandon McCullum and captain ON Morgan during the practice session.

Form and fitness in the spin department
Kolkata have 5 matches to play in Chennai. In such a situation, the role of spinners on this track is going to be important. Harbhajan is now 40 years old. He did not play last season. Whereas, in 2019, he was given a place in the team in the selected match by CSK. In such a situation, after 2 years, they may have difficulty in returning to the cricketing form. Also, maintaining fitness at this age will also be a challenge.

Varun is also in the discussion about fitness for some time. After a good performance in IPL 2020, he was included in the Indian squad in Australia and then England series. But both times he was out due to not being able to pass the fitness test. In such a situation, he will have to start from zero again.

Kuldeep has been out of form for some time. He was heavily beaten in the ODI series against England. Naren has not appeared in any particular form since the controversy over bowling action. In such a situation, the spin department can become a problem for Kolkata. 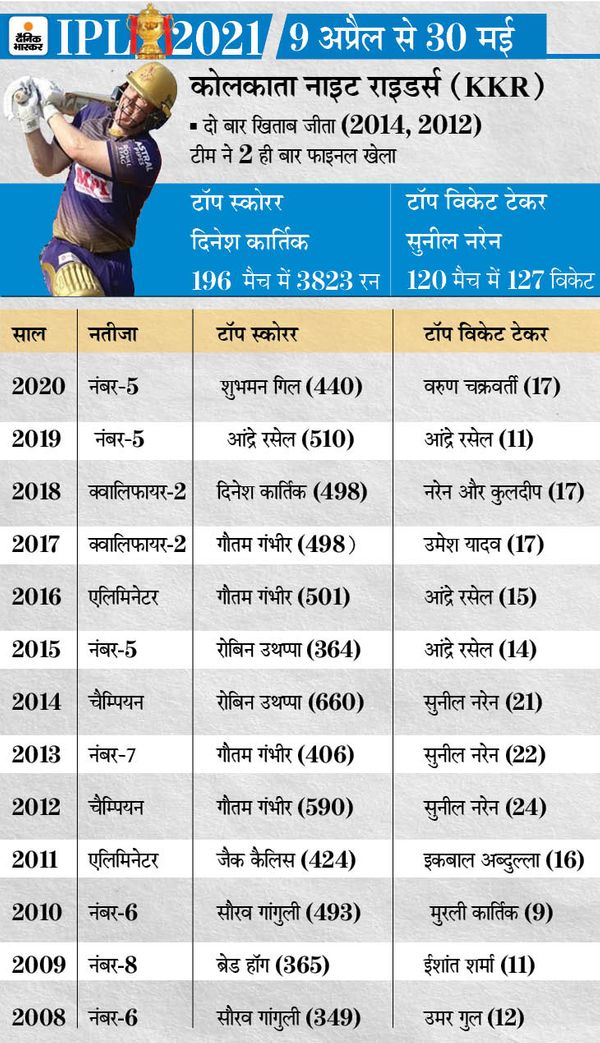 IPL 2021: Indian Disabled Cricket Council will be included in the...

IPL-14 debut with Rohit-Virat: RCB batting line-up with 8 all-rounders most...