Kordinate
Home News Sports We judge by actions, so why force umpires to judge on intent? 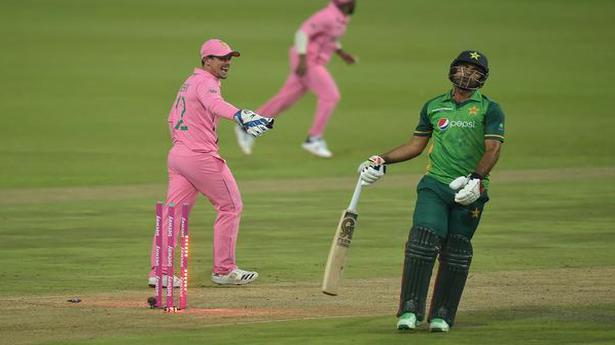 Deception is an acknowledged part of sport. Basketball players look left and pass right, footballers feint to catch defenders off guard, tennis players charge as if preparing to play a forehand drive and then tap the ball gently over the net, badminton players leap to smash and finish with a drop shot instead – the list of deceptions that are legal is a long one.

As is the list of illegal deceptions – using performance-enhancing drugs, diving into the box in search of a penalty in football, playing below par in return for money, and more.

Three years ago, a new section was added to the Laws of Cricket under ‘Deliberate distraction, deception or obstruction of batsman (Law 41.5).’

I have watched the run out of Pakistan’s Fakhar Zaman in the recent ODI against South Africa many times, and there is only one conclusion to be drawn. Wicketkeeper Quinton de Kock fooled the player by pointing to the non-striker’s end causing the batsman approaching him to slow down. The throw hit the stumps and Zaman was given out. De Kock’s immediate reaction was a “Hey, I fooled you” smile; the commentators praised his wit and sharpness while his captain Temba Bavuma called it “quite clever”.

De Kock deliberately misled the batsman and according to Law 41.5.1 it was an unfair dismissal. According to the ESPNcricinfo correspondent, match officials are unlikely to penalize either de Kock or his team.

There are two issues here. Let’s take the more important first – the question of intent. This is something umpires on the field are expected to take a call on in a split second. Umpires are trained professionals who know and understand the laws of the game. And now with the electronic eye assisting them, get a high percentage of decisions right.

But to expect a human being to get into the head of another to judge intention is both unreasonable and undoable. We can only judge by actions, my father used to say, only god can judge by intentions. To present umpires with this ethical conundrum – no DRS can read a player’s mind, after all – is unwarranted.

If we expand the argument further, cricket is a game of deception in so many ways. Here ‘deception’ is used in the sense that the ‘deceiver’ is providing incomplete or erroneous information to his opponent who has to decide on the basis of such inadequate data. The leg-spinner fools the batsman into misreading his googly, the master of the reverse swing upsets the batsman’s expectations, the batsman who reverse sweeps makes a mockery of the bowler’s field.

The argument that an addition to the law was required because a fake throw or a false dive might fool the batsman into not taking a run does not hold. The onus is on the batsman to keep his eye on the ball or trust that his partner is doing so.

Wicketkeepers are notorious for getting a runner to relax by using their body language to suggest the opposite of what is actually happening. Mahendra Singh Dhoni sometimes dropped his shoulders and even looked away from the scene of the action to trick a batsman into misjudging a run or relaxing at the wrong end. Fielders fake in jest, wicketkeepers do so too. Kumar Sangakkara and Jonny Bairstow, among others, have done it at international level presumably to hurry the batsman or watch him needlessly dive for the crease.

One of de Kock’s teammates defended him later saying the wicketkeeper was asking for a fielder to back up at the non-striker’s end. Was he? Who can judge intent?

Players know how to make things look accidental. Was a shot offered or was that deliberate padding? That’s another question the umpire has to answer on intent.

And so to the second issue. Yes, as the law stands, de Kock ought to have paid the price. But, not surprisingly, no one wants to make that call.

Even the Marylebone Cricket Club (MCC), custodian of the Laws would only say: “The law is clear, with the offenses being an attempt to deceive, rather than the batsman actually being deceived. It’s up to the umpires to decide if there was such an attempt. If so, then it’s not out, 5 Penalty runs + the 2 they ran, and batsmen choose who faces next ball. ” This is true of course, but the umpires could do with some guidance.

At any rate, that section of the law needs to be looked at again.

Chaminda fit even at the age of 47: Sri Lankan bowler...