Kordinate
Home News Top Stories Can You See The Crocodile Hiding In Plain Sight In This Video? 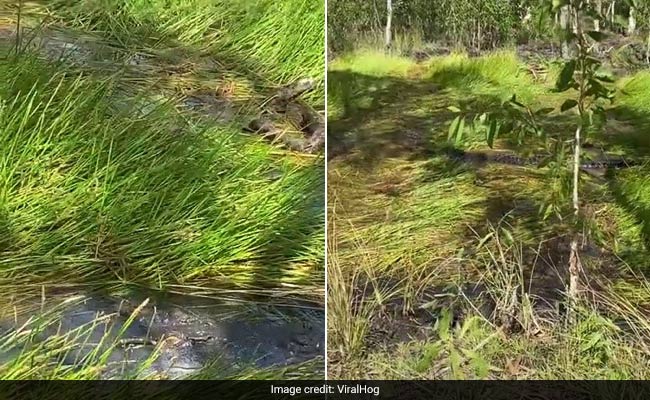 Can you see the crocodile in this video at first glance?

A dramatic video of a large saltwater crocodile hidden in the shrubs in plain sight has emerged online. Shot by Scott Gorman, who almost stepped on the four-metre-long (13-foot) reptile, the video shows the croc keeping low for a while before moving quietly through a water stream in Queensland, Australia. Mr Gorman found the crocodile while he was hunting pigs. The crocodile was so stealthy that it would have been nearly impossible to see it before getting dangerously close to the amphibious predator. Thankfully for Gordon and his friend, they noticed it before it could attack them.

Within a few hours of being posted, the video had already been viewed by almost 2,000 users.

At one point in time, when Mr Gorman zooms the camera to the head of the crocodile, its large, wide-open eyes are clearly visible. The eyes of crocodiles are fine-tuned for lurking at the surface to watch for prey. Researchers say the tightly packed receptors called “fovea” form a horizontal streak in crocodiles, so they are able to see above the surface area horizontally without moving their heads.

However, crocodile vision appears to be less precise than humans.

Crocodile sightings are common in northern Queensland. It’s usually said in croc countries that just because you can’t see a crocodile, it doesn’t mean there is no one nearby. These reptiles can stay underwater for more than an hour and can conceal themselves completely even in knee-deep water.

Last week, a fisherman noticed a similar-sized crocodile swimming near the beach in Queensland. 7News, a television news service in Australia, had put the video on its YouTube channel. According to the description, “a local man was fishing at the site this morning when he found himself just meters away from the four-metre-long snapper.”

When talking about crocodile-related incidents, a few days ago, a British woman was put into a medically-induced coma after being attacked by a crocodile while on holiday in Mexico with her twin sister. Melissa and Georgia Laurie were swimming in a lagoon when the attack occurred. Melissa was dragged underwater by the crocodile as she swam in the lagoon near Puerto Escondido. Her life was saved by her sister, who found her unresponsive and floating face down after she disappeared underwater. Read about it here.

Last month, a 22-year-old man, tarpon fishing at a wetland in Florida, US, had a terrifying moment when he noticed a gigantic alligator raising its head out of the water and about to approach him. As he began to retreat, the alligator approached him quickly, forcing him to run backward during which he even fell down. But he collected himself immediately and ran to escape the predator. Read more about the scary incident here.

For most people, such encounters would provide the fright of a life. What do you have to say?

Raushan - May 27, 2021 0
Software/Application
If you asked this question to someone two or three decades ago, the obvious answer would have 'NO.' However, as we are...