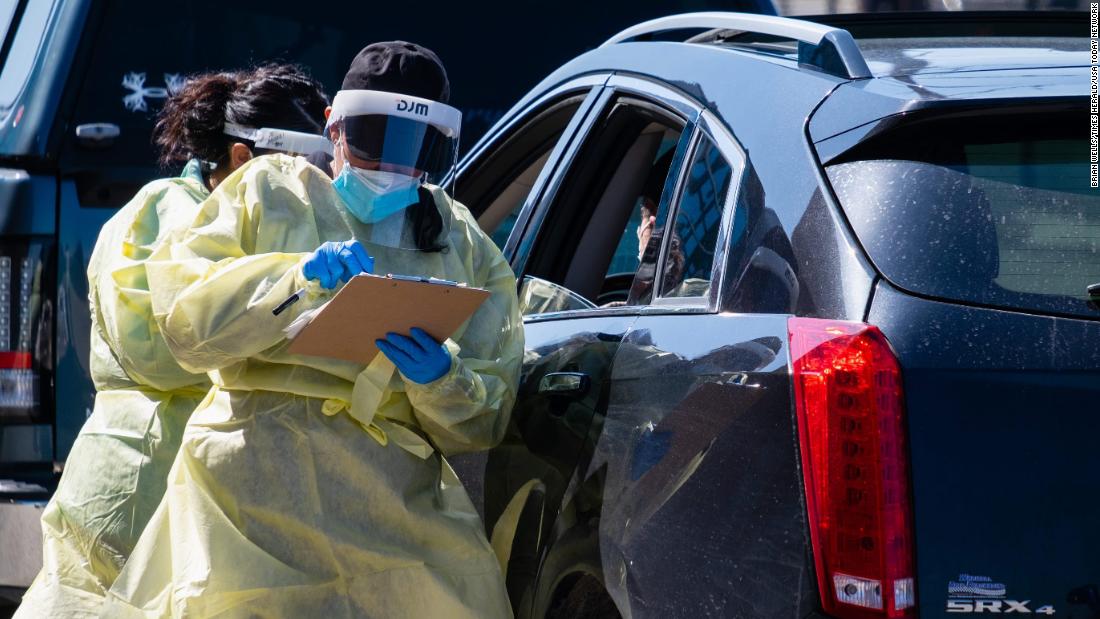 New York, Michigan, Florida, Pennsylvania and New Jersey had for more than 196,400 of the country’s 453,360 cases reported in the last week, according to data available Wednesday morning.

Those states are home to just 22% of the US population, according to estimates from the US Census Bureau.

Though vaccination rates have increased nationally, not enough people have been inoculated to outpace the spread. And with more-transmissible variants spreading, surges like Michigan’s may soon be seen more widely, epidemiologist Dr. Michael Osterholm said.

“I wish we had another three or four months before this B.1.1.7 variant surge started to occur,” Osterholm, director for the Center for Infectious Disease Research and Policy at the University of Minnesota, said Tuesday.

The country’s daily rate of new coronavirus cases rose over most of the last four weeks. Part of that is due to the spread of B.1.1.7 and other related variants, Dr. Rochelle Walensky, director of the US Centers for Disease Control and Prevention, said this week.
The US has averaged more than 64,760 new coronavirus cases a day over the last week – slightly lower than week prior, but still about 18% higher than two weeks ago, and 12% higher than four weeks ago, according to Johns hopkins.

The surge of variants in some states like Michigan should make the federal government think about shifting how it allocates vaccines, Dr. Ashish Jha, dean of the Brown School of Public Health, told CNN on Wednesday.

“In some states … case numbers are actually declining – California is one of them. Other states like Michigan, they’re actually doing a perfectly good job on vaccinations, but they have a huge surge, “Jha said.

“So the federal strategy has to be to shift more vaccines to places like Michigan that are surging so they can use more vaccinations to stop that surge and save lives,” he said.

Half of US adults may have had their first shot by the weekend, White House says

By the end of the weekend, the US will be approaching nearly half of all adults having their first shot of a Covid-19 vaccine, a White House official said.

But progress on vaccines does not mean the country is finished with the pandemic, a Biden administration adviser said Tuesday.

“We do have to remember that there are 100 million-plus adults that still haven’t been vaccinated,” Andy Slavitt, White House senior adviser for Covid-19 response, told CNN’s Chris Cuomo Tuesday. “They’re not there yet, and you don’t win the war until you bring everybody over with you.”

As of early Monday, the US had more than 107.6 million people ages 18 and over with at least one dose of a Covid-19 vaccine. That’s about 41.7% of the adults in the US, according to CDC data.
President Joe Biden has set a goal for every state to open vaccination to all adults who want them by April 19. That task that is becoming easier as the supply and accessibility of vaccines increases, Slavitt said.
But the US has a long way to go before reaching herd immunity. Dr. Anthony Fauci has estimated 70% -85% of the population needs to become immune. And the pace for vaccinating all willing adults varies greatly among states, according to a CNN analysis of federal data.
While states like New York and North Dakota might vaccinate all willing adults by June, it could take some states until the end of 2021. And in a race against both spreading variants and increasing Covid-19 fatigue, experts say it is imperative to vaccinate Americans quickly.

Some states are pulling back mask mandates and opening capacity for businesses. But Fauci said Tuesday that foregoing preventative measures while the majority of Americans are still unvaccinated is a mistake.

“It is premature to declare a victory,” said Fauci, director of the National Institute of Allergy and Infectious Diseases. “We’ve got to continue and hang in there a bit longer by continuing with the public health measures.”

Fortunately, the US still has tools to stay on course even if the public is fatigued, Slavitt said. Opening vaccine accessibility and focusing on vulnerable groups, as the US did to give 80% of teachers and school staff at least one shot amid calls for school to reopen, can help the nation continue to fight Covid-19, Slavitt said.

Plans to reopen as vaccinations increase

Though health experts caution the battle against Covid-19 is not yet won, many states have already reopened and others are planning to soon as well.

California, the first state to implement a lockdown for the coronavirus pandemic, plans to fully reopen activities and businesses beginning June 15, state officials said Tuesday. The state’s mask mandate will remain in place at least in the short run, Gov. Gavin Newsom said.

On Tuesday, Vermont Gov. Phil scott laid out a 90-day reopening plan leading up to July 4. At that time, the state plans to transition Covid-19 mandates into guidance.

By that time, Vermont officials anticipate roughly 70% of state residents will have received at least one vaccine dose.

Many school districts are also preparing to shift their plans. Of the 101st largest school districts in the country, more than half are offering a full in-person option, though full remote is still available to those families that choose it.

The moves comes as just over half of parents – 52% – said they are likely to get their children vaccinated against Covid-19 when a vaccine becomes available for their age group, according to results of a new Axios-Ipsos poll released Tuesday .

Experts and Officers are debating how to monitor vaccinations once life in the US regains a sense of normalcy.

Many experts have called for vaccine passports – documentation of vaccination status that could allow Americans more access to public settings and large gatherings.

New York rolled out the “Excelsior Pass” last month, the first state to do so, which grants residents access to events like sports and concerts.

And in California, certain businesses are already exploring the option of verifying that their customers are vaccinated.

But in Texas, Gov. Greg Abbott issued an executive order Tuesday prohibiting organizations that receive public funds from required proof of vaccination for services or entrance, according to a release from his office.

“Government should not require any Texan to show proof of vaccination and reveal private health information just to go about their daily lives,” Abbott said. “We will continue to vaccinate more Texans and protect public health – and we will do so without treading on Texans’ personal freedoms.”

In addition to vaccination documentation debates, the US will also have to contend with “long Covid,” a condition in which even patients with relatively mild illnesses could suffer symptoms long after their infection, Osterholm said.

As many as one in three people infected with Covid-19 have longer term mental health or neurological symptoms, according to the study published Tuesday in the journal Lancet Psychiatry.

“It’s going to be, I’m afraid, one of the legacy issues of this pandemic,” Osterholm said.

Correction: An earlier version of this story and the story’s headline overstated the percentage of US adults who will be vaccinated by the end of the weekend. The White House clarified that the US will be approaching having nearly half of all adults with their first shot of the coronavirus vaccine by this weekend.

We are group of young truks with varied experience in diverse field. Our intent is to share experience catering entire facet of society with our content , which brings a ting of “inclusiveness with exclusivity”. Our content is comprising of all the prevalent topics like Software development , Energy management ,Renewable energy , gadgets , Central and state funded scheme.
Contact us: cont[email protected]

Night Curfew In Bengaluru, 6 Other Cities In Karnataka From Saturday