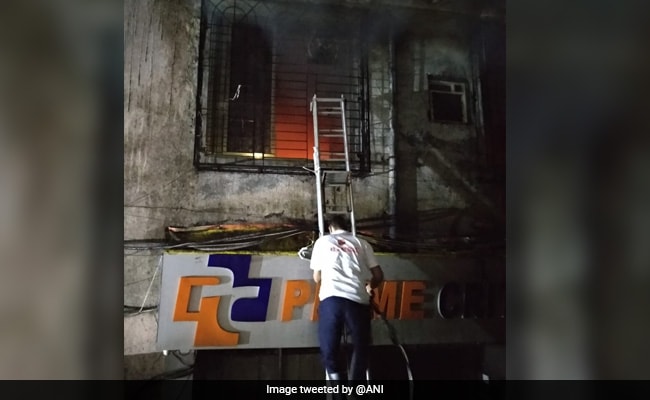 The blaze broke out in the Prime Criticare Hospital at Kausa in Mumbra at around 3.40 am

Four patients died this morning after a fire broke out at a private hospital near Maharashtra’s Thane, around 28km from state capital Mumbai. Several others were injured in the fire.

The patients died while being shifted to other hospitals after the blaze and not due to burns, an official said. They may have inhaled smoke after the fire, he added.

The blaze, which broke out at the Prime Criticare Hospital at Kausa in Mumbra at around 3.40 am, has now been brought under control. Three fire engines and five ambulances are at the spot.

Twenty patients were rescued from the hospital – six of them were in the ICU. The fire destroyed the first floor of the hospital, an official said, adding that there were no Covid patients at the facility.

The cause of the fire is not clear yet.

Today at around 03:40 am fire broke out at Prime Criticare Hospital in Mumbra, Thane. Two fire engines & one rescue vehicle are at the spot. Fire extinguishing underway. Four dead during shifting of patients to another hospital: Thane Municipal Corporation#Maharashtrapic.twitter.com/QR4NNYZd8Y

Maharashtra Minister Jitendra Awhad said Chief Minister Uddhav Thackeray has been informed of the incident and the victims’ families will receive Rs 5 lakh compensation each. The injured will get Rs 1 lakh.

A high-level inquiry committee comprising officers of the federal civic body, police officers and medical officers has been constituted to investigate the cause of the fire, the minister said.

Last week, fourteen coronavirus patients who were in the ICU died in a fire at a hospital in Virar, around 50 km from Thane.

(With inputs from PTI)

A card exempted a gay man from serving in Iran’s military....

The Source |Polo G Had the Biggest Streaming Week for a...

Billboard and Twitter to Unite for Social Media Chart