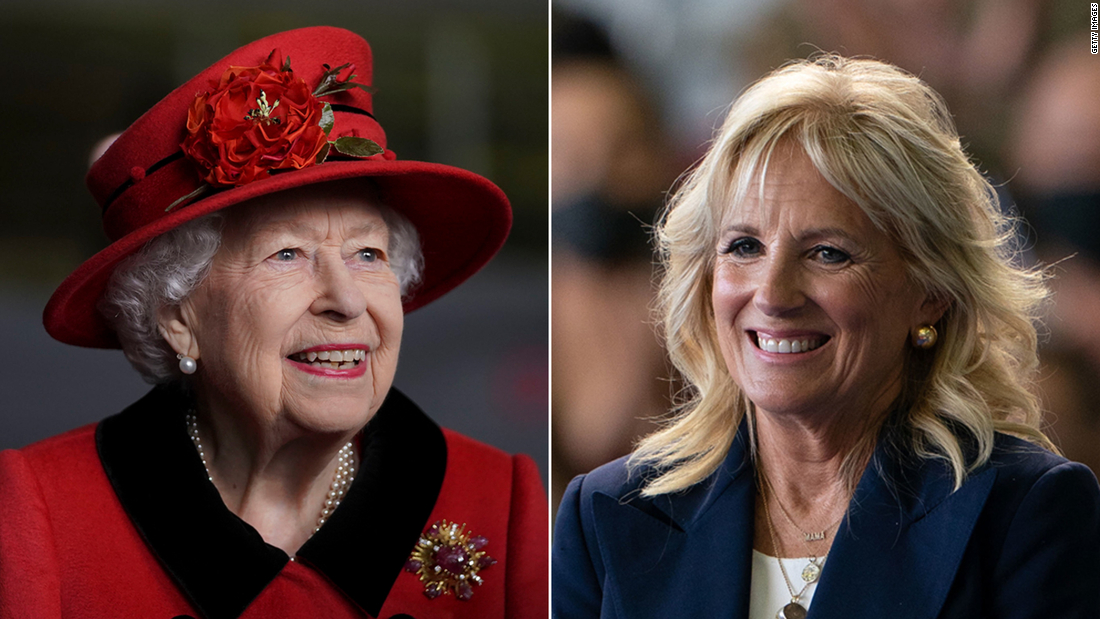 Biden has insisted on just about every turn that people address her by her first name. She means it — people actually call her that or, sometimes, “Dr. B.” The familiar approachability is part of the Biden narrative, and an aspect of her personality into which she leans hard.

“Put her in a palace with a Queen, or wherever you want, she’s ‘Jill from Philly,'” says one longtime acquaintance of Biden, when asked if the first lady might maintain her casualness while in the presence of one of the most formally nuanced people in the world. Internally, embracing her down-home roots is fine, but externally, meeting Queen Elizabeth II involves a curtsy, speaking only when spoken to, and making sure the royal is always leading the encounter, whether she sits or stands or walks — the guest does so only after Her Royal Majesty.

On Wednesday, aboard Air Force One, Biden tweeted a photo of herself thumbing through a giant binder with the caption, “Prepping for the G7” — a last-minute cram session before wheels touched down. The people familiar with Biden’s schedule in the run-up to the trip indicated the first lady did not obsess over details weeks in advance.
One White House staffer says Biden has little interest in the formality of “where to stand, or whether or not to hold someone’s hand or give them a hug. She just does what she feels.” (Conversely, Joe Biden will be the 12th US President the Queen has met during her 69-year reign — she likely already knows where to stand.)

A State Department official who worked in the protocol office during previous administrations notes the instructions from the Palace about world leader visits is “rigorous.” The State Department will send memos to the East Wing staff in advance about particularities with a visit, passed along from the Palace, as well as detailed outlines of each person the first lady might come in contact with, what their role is and how to address said person.

And, in a pinch, the chief of protocol is on hand to brief ahead of meetings, to answer any questions the visit, and to help procure, research and vet any gifts exchanged between the leaders throughout. (When the Obamas first met the Queen in 2009 they gave her an iPod filled with videos and photos of her 2007 trip to Virginia.)

The current acting chief of protocol, Asel Roberts, is part of the entourage traveling with the President and first lady in England this week.

Of course, all of this preparation is there for the “just in case.”

The choreography and tick-tock precision of a visit with a monarch is nothing new, it is expected and by most accounts, appreciated. What matters is how each first lady chooses to embrace the protocol that could determine their success.

Biden’s predecessor, Melania Trump, was, according to many people who worked with her, a stickler for the details, paying close attention to every part of a foreign visit, every step, pause, program, entrance and exit. (It was her husband Donald Trump’s irreverence to some of this study that often led to gaffes, such as when he walked ahead of Queen Elizabeth during his visit to Windsor Castle, or when he walked ahead of his wife on the tarmac after deplaning in Israel , causing her to swat his hand away when he realized his oversight.)
Who can forget then-first lady Michelle Obama’s 2009 meeting with the Queen, wherein she placed her arm around the monarch’s shoulder, creating a kerfuffle? The move was pure Obama, friendly and instinctual, a sign of warmth and friendship — and the Queen reciprocated with an arm, albeit awkwardly, around Obama’s waist. No matter the intent, Obama’s gesture was taken by the British press as an affront. Touching the Queen is verboten, unless of course she touches you first.

“I think Dr. Biden is seeking to be far more accessible and relatable than most of her predecessors, with the exception of Michelle Obama who had a similar approach,” says historian Kate Andersen Brower, author of “First Women: The Grace and Power of America’s Modern First Ladies,” of Biden’s first overseas visit as first lady.

“She is not an imperial first lady, like Nancy Reagan — who was so involved in her husband’s administration that she helped orchestrate President Reagan’s first meeting in Geneva with [former Russian leader Mikhail] Gorbachev. I would not expect Dr. Biden to be doing anything like that.”

Biden’s schedule does not have her joining the President for his two stops after England, first to Brussels, Belgium, for NATO meetings, and then to Geneva, Switzerland, for what is likely to be a contentious meeting with Vladimir Putin.

“Dr. Biden will be bringing a softer message. She’ll be resetting the American image abroad as much as the President does,” says Brower, adding, “I think she’ll stay away from politics.”

Biden may stay away from the tenuous issues that face her husband on this European trip, but she is carving time to endorse her own agenda. A White House official tells CNN the first lady will “engage in several substantive events, independent from the President.”

Though Biden’s schedule includes time with leader spouses for planned G7 activities — a common occurrence at summits such as these — it also makes time for at least three separate, solo events, two of which involve promoting Joining Forces, her initiative that helps military families.

On Friday, there is a rumored meet-up for Biden with the Duchess of Cambridge, Kate Middleton. The East Wing would not respond to questions confirming the meeting, which as of Thursday morning remains formally unannounced by both the Palace and the White House, or what it might entail. If the two women do attend an event together, it would be the first time they have met in person.

On Saturday, Biden will meet with members of Bude Surf Veterans, a local volunteer group that assists British military veterans with physical or mental health injuries through surfing. “She will host a discussion with veterans and their families about the impact of the program and on their health and well-being,” according to guidance from the East Wing.

The program is partially funded by the Invictus Games Foundation, a wounded warrior charity founded by Prince Harry, with whom Biden shares a close, personal friendship. They met in 2012 during an event for wounded warriors at the British Ambassador’s residence in Washington when Biden was second lady. The two stayed in touch and over the last several years, Biden has been a proponent of Prince Harry’s causes, attending multiple Invictus Games events. (In 2016, then-Vice President Joe Biden joked about being jealous of his wife’s friendship with the young royal, saying to the press, “Jill went to London for the last Games. She spent too much damn time with Prince Harry!”)

Finally, on Sunday, post-Queen, Biden has another solo outing, this one confirmed by her office, to meet with British veterans who participated in Walk of America, a 2018 expedition for which Biden served as patron. Led by the group Walking for the Wounded, three veterans from the United States and three from the UK walked 1,000 miles across America, sharing stories of fellow service members wounded or injured during their time in the military.

The White House official says outside of Biden’s primary participation on the trip as “supportive spouse,” and her “ceremonial role of first lady, she intends to use her platform abroad as she has been doing at home.”

“This type of foreign trip might have some new trappings, but the ritual is familiar to Jill Biden,” says one of the people familiar with her thinking. During her eight years as second lady, Biden made approximately 20 trips to foreign countries, mostly accompanying her husband, but many with solo objectives.

“She’s not naïve to the importance of a world audience, she knows the expectations,” says the acquaintance.

“I think the expectations are just that she be kind and warm,” says Brower. “After this last year and the trauma of the pandemic, [Biden’s] The job is to remind the world that Americans care about what goes on beyond our borders. She is not arm candy.”

‘Caring too much about fashion is not her thing’

As with visits such as these in the past, dating pre-Jacqueline Kennedy up to Melania Trump, there will no doubt be some focus on how or what Biden might wear.

“The curse of the East Wing,” says a former East Wing staffer from a previous administration, “is knowing whether we want it to or not there will be headlines about her clothes.” The double-edged sword of fashion is that it can be the catalyst for a first lady “moment,” but it can also distract from the serious work she brings to the table.

Biden’s office has rarely commented publicly about her wardrobe, and does not intend to start with this trip. A person who works with a notable fashion magazine tells CNN that Biden has been in touch with New York City-based designers about looks for her first foreign trip, but it is likely there will not be the hubbub over what she wears as there was with Trump, for example, who wore a $51,500 Dolce & Gabbana jacket to a leader-spouse event at her first G7 in 2017.

“I think she will be going out of her way to showcase American designers like Michelle Obama often did on her trips,” says Brower. “And I think she will not wear anything as expensive and unattainable as Melania often wore.”

One of the people familiar with Biden’s mindset says that “caring too much about fashion is not her thing.” This person also says many of the first lady’s most expensive items carry personal value and were bestowed as gifts, such as the Valentino tote bag customized with portraits of her two German Shepherds, Champ and Major. Biden’s gold “Panthère” Cartier watch is also thought to have been received as a personal gift, according to the acquaintance.

“She doesn’t like to talk about her clothes. That’s because of who she is, but also because of the pandemic and the last four years when image outweighed substance,” says Brower, who adds, however, as first lady, visual cues matter. “While this isn’t Jackie Kennedy in Paris in the spring of 1961, Dr. Biden is obviously someone who enjoys fashion.”

Kennedy, revered for her style, youth and exuberance, was, like Jill, a first-name-only first lady. “Jackie,” as America would come to refer to her, was not necessarily similar to “Jill,” yet each grasp the power of their public persona.

“I expect she’ll be restrained, but still have some fun,” says Brower.

Government Allows Import Of 17 Medical For 3 Months Amid Covid...

Thousands of migrants swim from Morocco to Spanish enclave of Ceuta