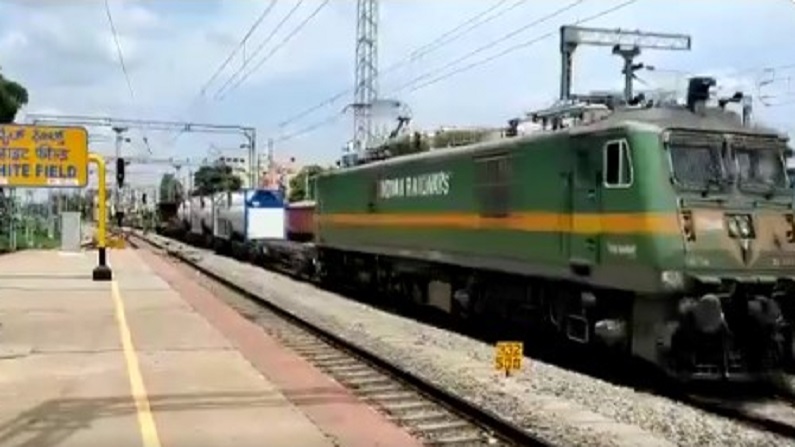 Railways has supplied more than 3 thousand metric tonnes of medical oxygen to Karnataka during the second wave of corona epidemic so far.

The second wave of Coronavirus in the country seems to have stopped, although the danger still remains and that is why Indian Railways is continuing to deliver medical oxygen to different states of the country. In the same sequence, another ‘Oxygen Express’ with 126.7 metric tonnes of liquid medical oxygen reached Bengaluru from Rourkela in Odisha on Wednesday for Karnataka. Railways has supplied more than 3 thousand metric tonnes of medical oxygen to Karnataka during the second wave of Kovid so far.

The Ministry of Railways said that with the delivery of more than 25,629 Metric Tonnes (MT) of Liquid Medical Oxygen (LMO) in more than 1,503 tankers so far in different states of the country, Oxygen Express has crossed a milestone in the service of the nation. has done. According to a statement issued by the ministry, Oxygen Express started its operations 36 days back on 24 April with delivering 126 MT of medical oxygen in Maharashtra. So far 368 Oxygen Express has completed its journey and brought relief to different states.

Corona cases have also decreased in Karnataka and on Tuesday, 9,808 new cases of infection were reported and 179 deaths were recorded, which is the lowest figure in the last 44 days. For the first time in the last 56 days, the number of daily positive cases in the state has been recorded below 10,000. Earlier on April 13, 8,778 cases of corona infection were reported in the state. The number of infection cases in the state has reached 27,17,289 and so far 32,099 people have died of corona. At the same time, so far 24,60,165 people have been cured of this disease.

situation of corona infection in the country

The number of new cases of corona infection in the country has come down to less than 1 lakh for the second consecutive day today. The weekly positivity rate has come down to 5.94 percent, while the number of active cases has come down to 12.31 lakh. The Health Ministry said that now there are only 209 such districts where more than 100 new cases are being registered daily. Many states are ending the lockdown after the cases are reduced, although the government has asked to avoid gatherings in large numbers for the next few months. Tamil Nadu, Kerala, Maharashtra and Karnataka- The total number of active cases in these four states is 7,54,780, which is about 58 percent of the total active cases in the country.

read this also – ‘Don’t use saliva while packing, may spread corona’, orders of Madras High Court

WiFi Range is Very Poor on My Linksys RE6300 Extender. What...

aryan - April 26, 2021 0
Server
Done with the Linksys RE6300 extender setup but still getting poor WiFi range? This post has got you covered!

Bihar: Food crisis arose in front of beggars during the Corona...

Indian media have gone easy on Modi. That’s changing because...