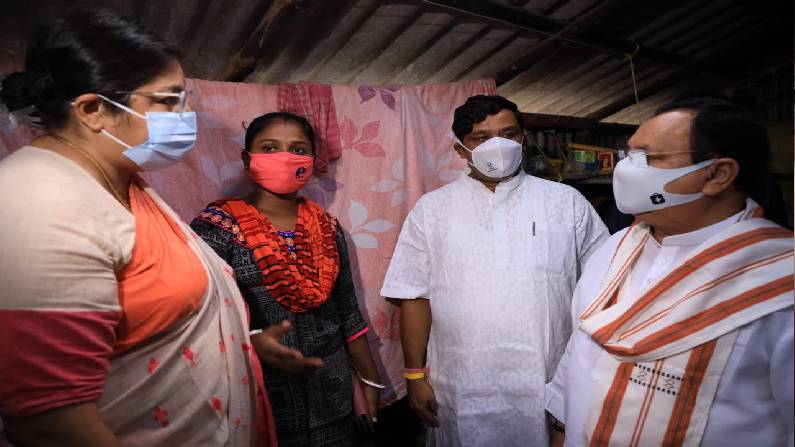 BJP national president JP Nadda on Tuesday visited the house of the BJP workers who were victims of violence and consoled the people of his family.

BJP national president JP Nadda on Tuesday visited the house of the BJP workers who were victims of violence and consoled the people of his family, saying that every BJP worker is with him. Since the announcement of the West Bengal Election Result, the BJP workers across the state have been worrying over the killings, frequent attacks on their homes and offices, arson, looting and said that in this way the BJP Won’t be able to stop

West Bengal: BJP chief JP Nadda meets the families of party workers who were affected in post-election violence, in Pratapnagar of South 24 Parganas

Martyrdom will not go waste

JP Nadda said, “After the results were declared at 5 pm, TMC goons went to TMC goons, the residence of BJP worker Haran Adhikari. His house was ransacked. Threatened women. Threatened children. Attacked them. Broke his wife’s teeth. Dragged, beaten and carried away .. beaten and beaten on the way. “

After the results, TMC goons went to the house of Haran Adhikari (BJP worker), vandalized it, threatened women & children, attacked them, & broke his wife’s teeth. They then dragged Adhikari out of his house & beat him up. He died: BJP chief JP Nadda in South 24 Parganas, WB pic.twitter.com/4QDtJCaZnS

Weighing appeasement will not work

He said, “The orgy that your party has done after winning the election Mamta ji. He tells you how much you believe in democracy? TMC workers and leaders are saying this. All these incidents are fake news in social media. How the wife of Haran Adhikari was crying. If BJP had said dictatorship, then it is visible. They are all members of Tolabaji. They feared that if the BJP came, their grain and water would end and the politics of weighment and appeasement would not work. Not a single person has been arrested. It tells how is the law and order here? “

BJP leaders will go to the home of the aggrieved worker

He said that the BJP leaders will go to the house of all the workers. Will give the family a blast. The fight for justice will leave no stone unturned to establish justice in Bengal. Mamta ji has started weighing, appeasing. We will compete in a democratic way. You do not have the power to stop the BJP. Is this the culture of Bengal?

Also read- Violence in Bengal: ‘Democracy will fight in a democratic manner, martyrdom of BJP workers will not go waste’ said JP Nadda

Jeezy and Jeannie Mai Host Their Wedding at Their Atlanta Home

Two US Capitol Police officers sue Trump and say he should...