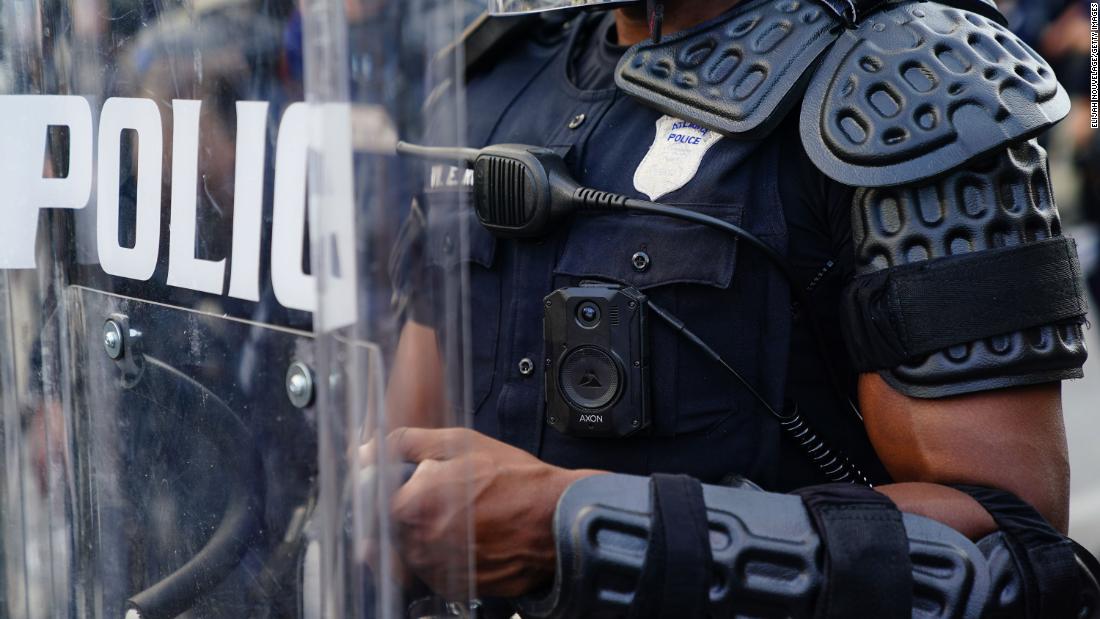 In 2017, Hahn became the first African American police chief in the Sacramento Police Department. While he understands the frustrations of the Black community, the name-calling is hard to hear.

“I think that’s probably the hardest thing to have your own community, something that you’ve been part of since the day you were born …” has this perception, Hahn said.

But Black police officers also get called names by others. Hahn recalls how during protests, “young white kids” walked up to them and called them a “race traitor.”

As the shootings of Black people continue to rock cities across America, debates about reform and what it means to defund the police continue, Black officers are finding themselves navigating two worlds that are often at odds, and sometimes even at war, with each other: The black and the blue.

With police training programs under scrutiny after Derek Chauvin’s murder conviction, the Sacramento police department is using several high-profile police killings of Black Americans as it trains the next generation of officers to better anticipate and respond to high-risk encounters.

Under Hahn’s leadership, the department’s training techniques have been largely shaped by the police killing of Stephon Clark, a 22-year-old black man, in the city in 2018. And graphic videos of recent fatal police shootings, including 16-year-old Ma’Khia Bryant in Columbus, Ohio, and 20-year-old Daunte Wright in Brooklyn Center, Minnesota, are serving as teachable moments in the agency’s hands-on training.

Confronting racism on the job

The New Jersey officer and a fellow officer were patrolling the streets of East Orange when a black woman and her daughter accidentally stepped in front of their police cruiser.

The other officer, who was White, rolled down his window.

“What the hell are you doing, you effin ‘ns?“Davis recalled him saying, while censoring out the racial slur.

Davis, who is Black, is now retired from the force. But that moment 30-something years ago was just one of the many times he realized how some of his White colleagues viewed his community.

“The ‘few bad apples’ theory is a theory that I think is postulated by my colleagues and politicians to minimize the impact of this racism that is baked into the culture of policing,” Davis said.

They are aware of the deep divide

The chasm between cops and communities of color has always been deep – and it’s getting deeper.

He acknowledges that not all cops are bad. But, he says, put two bad apples in a bag of good ones, when you “check on them next week, you’ll see that you got worms through all the apples.”

They’ve come to accept it

It is this world that Black officers have to tread – a delicate balance of reconciling allegiance and identity.

Retired LAPD Sergeant Cheryl Dorsey knows this all too well.

She was working as a patrol officer during the 1992 Los Angeles riots, which started after four white officers were acquitted in the beating of a black man named Rodney King.

As a cop during those protests, Dorsey was called plenty of names. But she didn’t take it personally because “they don’t know Cheryl. They just know the uniform,” she said.

“I’ve never been torn. I’m able to be a black woman and a police officer and do my job professionally as I was trained, rely on my training and tactics so that I’m not aggressive when it’s unnecessary,” says Dorsey, who wrote an autobiography titled “Black and Blue, The Creation of a Social Advocate.”

Davis knows this too.

He’s been called a “pig” among other names at protests, but he had to understand that “it’s not you personally they’re attacking. He’s attacking the symbol that you represent.”

They know where their loyalties lie

A white officer was accused of shooting and killing a black tow truck driver who failed to stop at his command.

Dorsey says she knew the risks of speaking out against another officer. Just like in the military, the camaraderie and kinship between officers is strong.

But one way to mend this rupture between cops and minorities is to stand up to abuse, Dorsey says.

“You have to make a decision about who you want to be when you’re out there in that uniform as a black police officer,” she says. “And I was clear of who I was from day one.”

They know change is needed

Another way is to change perception by changing the reality. If people in the community see the police as the enemy, it’s on the police to show them otherwise, Davis says.

He started with himself by forming Black Cops Against Police Brutality in 1991. By being on both sides, he was able to stand as an advocate for police reform while proving to his black community that he was one of them.

In 1995, Davis was invited to Paterson, New Jersey, after a 16-year-old black teen died at the hands of a police officer. The city was on edge.

“I promised them that when I came amongst them, I would come unarmed. There were times when it was extremely tense in the streets and they were threatening to kill a black cop. Yet I volunteered to be there, to stand with them,” Davis says.

“When you take your oath to protect and serve the people, those are the risks that you take.”

Some things are changing

This is not to say things are not changing Sergeant Rashun Drayton and Captain Sonia Pruitt are proof.

Drayton was the Santa Barbara Police Department’s only black officer when he started his career over 20 years ago. Now, he says, his department has employees of multiple races.

Pruitt, who is also chairwoman of the National Black Police Association, was the first black woman to be named captain of the Montgomery County Police Department in Maryland.

Still, police forces are by and large whiter than the communities they serve.

“When you see a police force of 90% white and they’re patrolling a neighborhood that’s a 100% black and they don’t really know the people in the neighborhood, I don’t know how that can be effective,” Drayton says .

He says his department tries to regularly meet with community groups to talk about their experiences and how the police can better serve them.

Diversifying a police force and building trust with the community can take years. What needs to happen now is to standardize police policy across the nation, they say.

“There needs to be a completely consistent use-of-force policy across this country so that there can be no question about whether an officer used excessive force,” Pruitt says.

“There should also be a national database to track officers who have been accused of misconduct … so they would not be allowed to be hired anywhere else in the country.”

Davis became a police officer to finance his music career as a percussionist.

Dorsey became a police officer because she was a single mother who needed a “good paying job with great benefits.”

Pruitt became a police officer because she wanted “freedom away from a desk.”

Drayton didn’t even want to join the force, but was recruited at the nightclub where he was working.

But when they did, their duty went beyond the police motto of ‘to protect and serve.’ They had to push for change from within.

MARVEL Drops First Trailer For ‘Shang-Chi And The Legend Of The...

Kieron Pollard hits 6 sixes in an over, Yuvraj Singh Tweets...