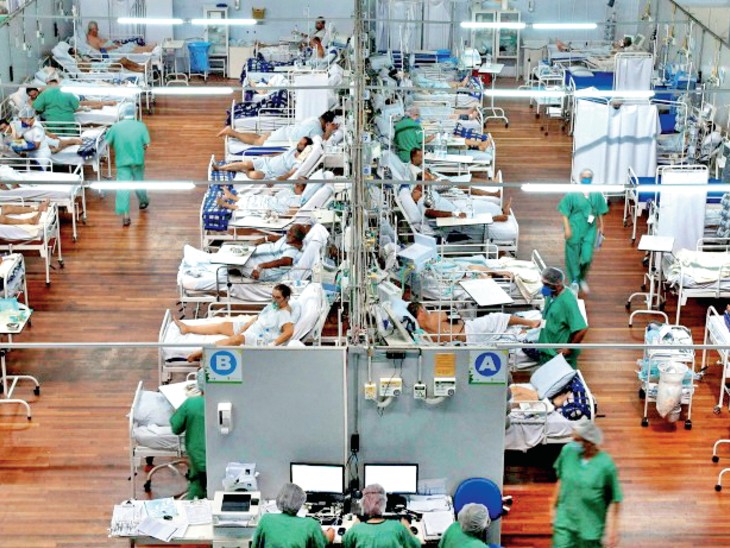 Most hospitals in Brazil are already full and now there is no space left in newly constructed temporary hospitals, due to which people are dying due to lack of treatment.

In Brazil, more than 4000 people have died from Corona in the last 24 hours on Wednesday. This is by far the largest figure in one day of deaths in Brazil. Before this, only America and Peru have seen so many deaths in one day. The total deaths here have also crossed 3.37 lakhs, which is the highest after the US. Also, more than 80 thousand new patients are getting daily. Hospitals are full and corona patients are dying waiting for treatment.

Miguel Nicolais, a professor and a Brazilian doctor at Duke University, says – Brazil has become like a nuclear reactor, where a chain reaction is taking place. It has become uncontrolled and the country has become Biological Fukushima. Despite this terrible situation, the Prime Minister of the country, Bolsonaro, is opposing some kind of lockdown. He said that the damage to the economy from the lockdown would be more than the damage caused by the virus.

Rather, they are trying to remove some of the restrictions imposed by the local administration through the courts in many cities. However, world-wide experts are constantly criticizing Volsonaro. Dr. Nicolais says, ‘This is the biggest tragedy in Brazilian human history. According to the latest estimates, if the infection rate remains the same, by July 1, we will cross 5 lakh deaths.

Europe: Restrictions and correcting old mistakes reduced new patients by less than half
The number of new patients daily has dropped significantly in Europe’s top infected large countries. In the UK, including France, Italy, Germany, Spain, Poland, the number of new patients per day has reduced by more than half in the past week. On April 6, 8054 cases were found in France, while around 50 thousand cases were being received in France. More than 90 percent of ICU beds were full. Therefore, a four-week national lockdown was imposed there last week.

Now for three days, there is a decrease of more than five times in new cases. Everyday new cases have come to around 2 thousand in the UK through fast vaccination and stringent restrictions. Most of the countries of Europe had lifted most of the restrictions on Christmas, so a new wave of epidemics came. Learning of this mistake, all kinds of mobilization were banned on Easter. Most countries, including France, Italy, Germany, Poland, Spain and Britain, imposed lockdowns. So the situation seems to be coming under control now.

Britain: Johnson will start a new phase of unlock from next week
British Prime Minister Boris Johnson announced the launch of the second phase of unlock from next week. According to government data, the country has completed all 4 tests to ease lockdown restrictions. Shops and pubs can also open from Monday. The number of new patients has come down to 2 thousand every day.

World: New patients were decreasing from April 1, then crossed 6 lakhs
New patients worldwide were declining since 1 April. But on Wednesday it increased again. On April 6, more than 6 lakh new patients were found worldwide. However, India alone contributed more than 1 lakh in this. So far, more than 13.3 million people have been infected in the world. 28.86 lakhs have died.

Minneapolis 911 dispatcher is now testifying about sending police to the...