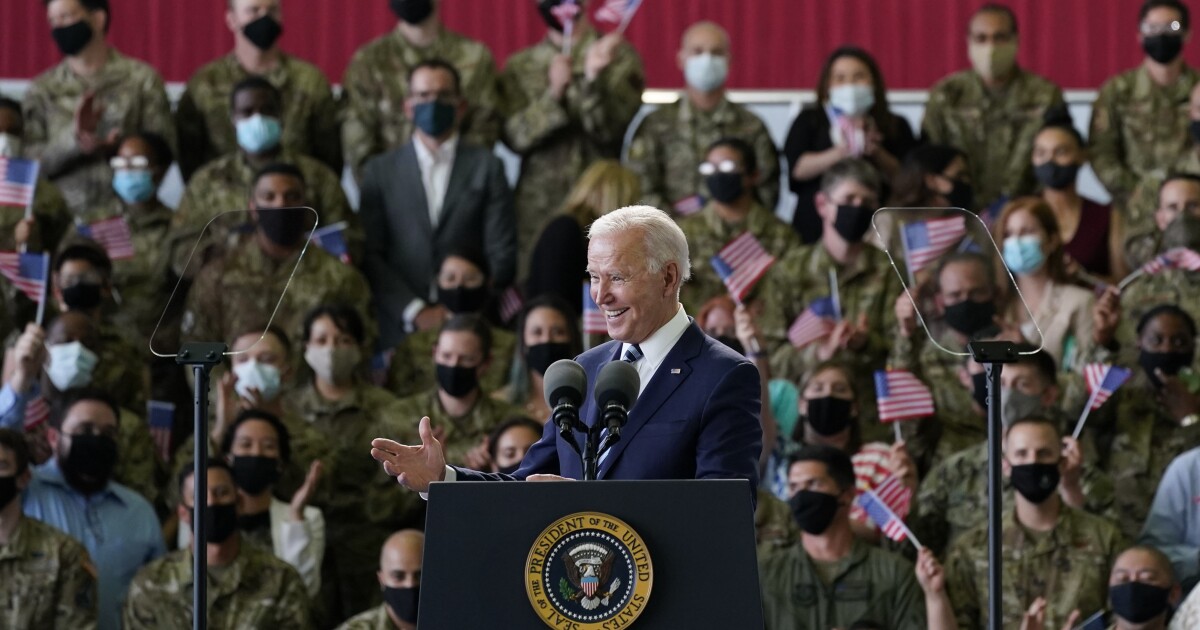 
The United States will buy 500 million doses of Pfizer’s COVID-19 vaccine to donate to impoverished nations, signaling a massive new investment in the worldwide inoculation campaign, according to a person familiar with the initiative.

President Biden will announce the plan Thursday while attending the annual summit of the Group of 7, made up of the leaders of the seven of the world’s largest democracies, in Cornwall, England. The Pfizer doses will be provided to COVAX, an international partnership for distributing vaccines to low-income countries.

The donation represents a cornerstone of the US effort to bring the global pandemic to an end, as well as to counter the influence of authoritarian countries like Russia and China, which were quicker to provide vaccines overseas. Biden focused first on providing enough vaccines to Americans, drawing criticism from humanitarian organizations who said the world’s richest nation shouldn’t be sitting on the sidelines.

Ramping up international vaccine distribution will not only save lives by curtailing COVID-19 outbreaks but also stem the emergence of new, potentially more dangerous variants that could spread more quickly from country to country, lengthening a pandemic that has already killed an estimated 3.75 million people .

Speaking to US military personnel after landing in England, Biden said he would use the summit to urge allied nations to play a larger role in addressing the coronavirus and other problems like climate change. He’s also scheduled to attend meetings with the North Atlantic Treaty Organization and the European Commission in Brussels. He’ll then travel to Geneva to sit down with President Vladimir Putin of Russia, which is not part of the G-7.

“The United States is back and the democracies of the world are standing together to tackle the toughest challenges,” he said.

The US will provide 200 million Pfizer doses this year and 300 million in the first half of next year, according to the person familiar with the plan. The person requested anonymity to provide details before Biden’s official announcement, which comes after weeks of behind-the-scenes work by administration officials.

The vaccines will be provided through COVAX to 92 countries and the African Union, which comprises 55 nations. The Pfizer vaccine requires two doses to be fully effective, so the donations would be enough to vaccinate 250 million people. By comparison, 140 million Americans have been fully vaccinated.

The news comes at a critical time in the global crisis. Of utmost concern is the Delta variant, also known as B.1.617.2, which first emerged in India and is believed to be partially responsible for the country’s recent explosive spread. The variant, suspected to be 40% to 50% more transmissible than the Alpha variant, or B.1.1.7, which emerged in the UK, has now been detected in some 60 countries.

The Delta variant is also quickly becoming the dominant strain in countries like the Democratic Republic of Congo, according to John Nkengasong, director of the Africa Centers for Disease Control and Prevention. Fewer than 0.1% of people in the central African country have gotten a vaccine.

Many African nations do not have the biotech ability to identify and track the movement of different variants within their borders. And their vaccine inventory contracted when India, a major global supplier, halted exports of the shots to address its domestic crisis. Countries such as Burkina Faso and South Sudan, for example, also report vaccination rates below 0.1%.

Slow vaccination campaigns are of major concern, because experts can’t predict what kind of advanced variants will exist by the time the rollouts reach a critical mass. Every new coronavirus infection is a chance for mutations to arise, potentially ushering in a dangerous new version of the virus that could evade existing defenses. When such variants arise and move quickly, even fully vaccinated countries could become at risk.

That’s why public health officials continue to argue for defensive tactics, such as masking and social distancing, until each region’s case numbers are negligibly low. The long-lasting solution, however, is vaccination. The World Health Organization estimates that 11 billion doses are needed to inoculate the planet.

“We won’t end this global pandemic anywhere unless we beat it everywhere,” Tom Hart, acting CEO at the One Campaign, an international anti-poverty organization, said in a statement. “Donating doses to COVAX will save lives, reduce the spread of variants, and help reopen the global economy.”

Activists will continue to push for even stronger action from the US and other rich nations. Niko Lusiani, a senior advisor with Oxfam America, said intellectual property rules must be lifted and technology must be shared to boost vaccine production capacity around the world.

“It’s encouraging to see that in its quest to get America vaccinated, the Biden administration has not lost sight of the needs of those outside our borders,” Lusiani said in a statement. “However, charity is not going win the war against the coronavirus.”

The Biden administration already announced that it would support a waiver for intellectual property protections, but the European Union has balked at the idea.

Before Thursday’s announcement, the US had committed 80 million vaccines to the global effort by the end of June. It’s also providing $2 billion in funding to COVAX, with another $2 billion spread out over the next two years.

Many countries have struggled to get access to vaccines as rich nations bought up doses to inoculate their own populations. Numbers from Our World in Data, a project based at the University of Oxford, show a stark gap in worldwide distribution.

Although Brazil and India have suffered devastating outbreaks, they’ve struggled to vaccinate people as quickly as other nations. Only 24% of Brazilians and less than 14% of Indians have received at least one dose.

And though the numbers of new COVID-19 cases and deaths are decreasing globally, there are major discrepancies across regions. Almost every country in South America, for example, ranks among those with the highest cases and death rates worldwide.

Vaccination coverage on the continent varies. Uruguay was among the worst hit, but almost a third of the population has been fully vaccinated. Peru has the world’s highest per capita death toll — about 1 in every 175 people have died — but less than 5% of the country is fully vaccinated.

Still, he said places like Israel, which rapidly vaccinated large swaths of its population and drove down infections, showed how life-saving the measure can be. The Biden administration’s forthcoming announcement could help other countries catch up.

“Global pandemics will be solved by a global solution,” Dr. Anthony Fauci told MSNBC on Wednesday. “You cannot live in a vacuum in this world. We’re an interconnected world, particularly when you’re dealing with a highly transmissible respiratory virus.”

Megerian reported from Washington, Baumgaertner from Los Angeles and Stokols from Cornwall.

The weapons seizure so big it covered the rear deck of...

US steps up response to Israeli-Palestinian conflict after slow start