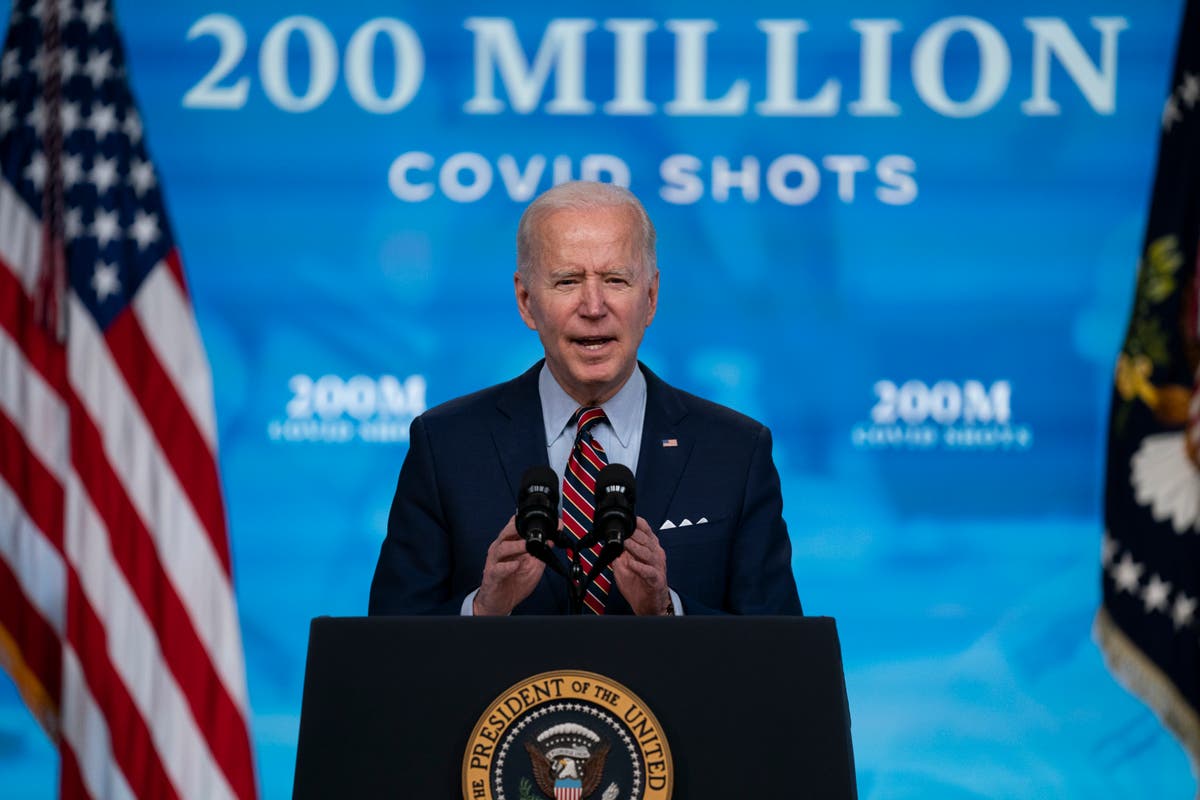 
The Biden administration has announced a new goal of vaccinating 70 per cent of US adults with at least one dose of a Covid-19 vaccine and for 160 million adults to be fully vaccinated by 4 July.

This new vaccination goal, which was released by the White house ahead of President Joe biden‘s address on Tuesday afternoon, gives the federal government two months to reach those milestones.

“People who are not fully vaccinated can still die every day from Covid-19,” Mr Biden said when announcing the new goal. “This is your choice … it’s life and death.”

In recent weeks, Mr Biden has used 4 July as a date where Americans might see a turning point in the coronavirus pandemic after more than one year of lockdown measures and health guidelines.

Mr Biden acknowledged that the federal government would now have to target those who are more hesitant about receiving a Covid-19 vaccine in order to reach the administration’s latest vaccination goal. His administration in the next couple of months would now focus on three distinct population groups: children ages 12 to 15, adults who have been unable to access a vaccine, and adults who are still hesitant about receiving a vaccine.

To target those three groups, Mr Biden has directed tens of thousands of involving involved in the federal pharmacy program to offer walk-in appointments that will make vaccines more accessible to all Americans.

The Federal Emergency Management Agency (FEMA) was also directed to mobilize more pop-up clinics and mobile vaccination units that would be able to target people living in more rural areas who are unable to reach a vaccine. About $ 1.9tn in funding would also be all allocated to hospitals in rural locations so they could target communities who were less likely to have access to a vaccine, the White House announced.

Currently none of the available vaccines was approved for people 15 years and younger, but the federal government anticipated that the Pfizer could receive emergency use authorization from the FDA to vaccinate those ages 12 to 15.

“If that announcement comes, we are ready to move immediately,” Mr Biden said of the potential authorization.

But the president said that his administration would not get ahead of the FDA when making the decision on if the Pfizer vaccine was safe within that age group.

“The FDA and the FDA alone will make that decision,” he said. This decision could come as early as next week.

As of Monday morning, more than 145 million US adults, or 56.3 per cent, have received at least one dose of the Covid-19 vaccine and 104 million, or 40.6 per cent, of adults were fully vaccinated against the novel virus, according to data released by the CDC. So the Biden administration is still needed to reach millions of residents to achieve the new goal.

Vaccine hesitancy was still prevalent among segments of the population, particularly those living in rural locations and Republicans.

A survey released by UCLA, which surveyed 38,000 people, found that 38 per cent of respondents were concerned about side effects from the Covid-19 vaccines. Also 34 per cent said they did not believe the vaccines were safe.

How the Biden administration would get to 70 per cent of adults, as well as the other 30 per cent, remained a challenge.

Some state governors and local officials have offered incentives for people who received a Covid-19 vaccine in an effort to target those who are hesitant.

In New Jersey, Governor Phil Murphy said residents could bring their vaccination cards to designated breweries for a free beer. Governor Larry Hogan of Maryland also announced the government would offer a $ 100 financial incentive to state employees who receive a Covid-19 vaccine.

This comes as the country aims to reach the elusive “herd immunity” from Covid-19, which some health experts have estimated would require 70 to 85 per cent of the population to receive a vaccine.

“Even if your chance of getting seriously ill is low, why take the risk when you have a safe, free and convenient way to prevent it?” Mr Biden said.