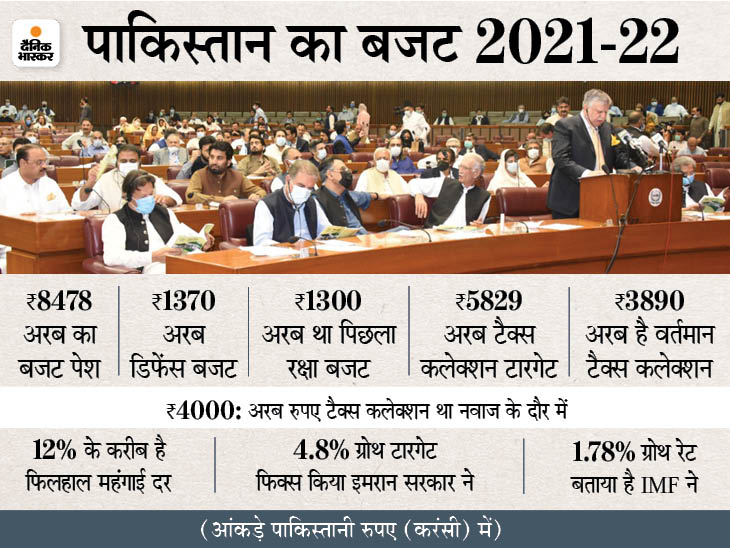 Pakistan’s Imran Khan presented his third budget in Parliament on Friday. This time Shaukat Tarin took over the responsibility of presenting the budget. He is a former banker and the fourth finance minister in three years of the Imran Khan government. Tareen presented a total budget of 8478 billion Pakistani rupees. When Imran came to power three years ago, he had promised to make tax collection of 8 thousand billion rupees. The interesting thing is that instead of increasing the tax collection during Imran’s era, 120 billion rupees decreased.

During the budget speech, as Finance Minister Tareen began to read aloud to Imran Khan’s economic vision, the opposition raised slogans of ‘Go Niyaji Go’, ridiculing it. Imran Khan’s full name is Imran Khan Niazi. During this, the opposition MPs were holding placards in their hands. Anti-government slogans were written on them.

4 finance ministers in 3 years
When Imran Khan came to power, he first made his special friend Asad Umar the Finance Minister. Within 7 months, questions started being raised about his ability. Apart from Pakistan, he also had the citizenship of America. After this, Dr Abdul Hafeez Sheikh was made the Finance Minister. They also failed. Then Hamad Azhar was given this ministry. Now former banker Shaukat Tareen has been given this responsibility. He is an accused in the sugar mill scam.

relief to employed people
Tarin announced relief to government employees in the budget. Said- We are not imposing any new tax on the employed people. It has been decided to give relief to small businessmen. So far 12 lakh people have been helped under the Ehsaas program. The government is going to end the system of bank guarantee on loans up to 50 thousand Pakistani rupees.

environmental concern
Tarin said – Climate change is a big challenge for the whole world and Pakistan is also not untouched by it. Therefore, attention is being paid to environmental protection and in this connection we are going to promote electric cars. Big relief is being given to their manufacturers in tax. The importance of the e-commerce sector has once again come to the fore due to Kovid-19. The government will also give relief to these platforms so that people can use them more.

the army will be disappointed
There have been continuous reports in the Pakistani media for the last few months that the army is not happy with the functioning of the Imran government. The army wants to start business from India. The previous Finance Minister Hamad Azhar also announced this in April. But, then in the cabinet meeting, Foreign Minister Shah Mehmood Qureshi opposed it and Imran canceled it by taking another U-turn. Not only this, Hamad also had to resign. Army Chief General Bajwa wanted if there can be a ceasefire then why can’t business be done. But, Imran and Qureshi felt that this would send a wrong message to the people and the opposition would become attackers.

1370 billion rupees have been kept for the army in this budget. This is just 70 crore more than last year’s budget.

War reduced parts of Gaza to rubble. It’s his job...