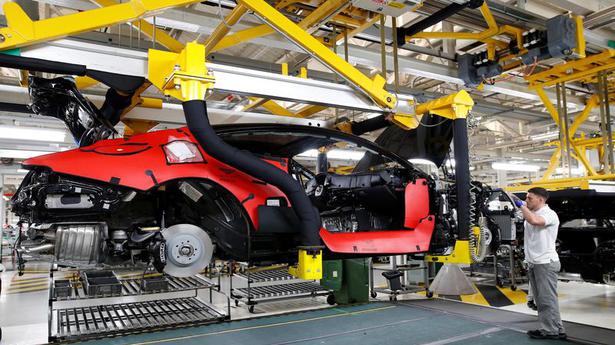 
Car manufacturers including Volkswagen, Ford and General Motors have cut output as the chip market was swept clean by makers of consumer electronics such as smartphones – the chip industry’s preferred customers because they buy more advanced, higher-margin chips.

The semiconductor crunch that has battered the auto sector leaves carmakers with a stark choice: pay up, stock up or risk getting stuck on the sidelines as chipmakers focus on more lucrative business elsewhere.

Car manufacturers including Volkswagen, Ford and General motors have cut output as the chip market was swept clean by makers of consumer electronics such as smartphones – the chip industry’s preferred customers because they buy more advanced, higher-margin chips.

The semiconductor shortage – over $ 800 worth of silicon is packed into a modern electric vehicle – has exposed the disconnect between an auto industry spoiled by decades of just-in-time deliveries and an electronics industry supply chain it can no longer bend to its will.

“The car sector has been used to the fact that the whole supply chain is centered around cars,” said McKinsey partner Ondrej Burkacky. “What has been overlooked is that semiconductor makers actually do have an alternative.”

Automakers are responding to the shortage by lobbying governments to subsidize the construction of more chip-making capacity.

In Germany, Volkswagen has pointed the finger at suppliers, saying it gave them timely warning last April – when much global car production was idled due to the coronavirus pandemic – that it expected demand to recover strongly in the second half of the year.

That complaint by the world’s No.2 volume carmaker cuts little ice with chipmakers, who say the auto industry is both quick to cancel orders in a slump and to demand investment in new production in a recovery.

“Last year we had to furlough staff and bear the cost of carrying idle capacity,” said a source at one European semiconductor maker, who spoke on condition of anonymity.

“If the carmakers are asking us to invest in new capacity, can they please tell us who will pay for that idle capacity in the next downturn?”

The auto industry spends around $ 40 billion a year on chips – about a tenth of the global market. By comparison, Apple spends more on chips just to make its iPhones, Mirabaud tech analyst Neil Campling reckons.

Moreover, the chips used in cars tend to be basic products such as micro controllers made under contract at older foundries – hardly the leading-edge production technology in which chipmakers would be willing to invest.

“The suppliers are saying: ‘If we continue to produce this stuff there is nowhere else for it to go. Sony is not going to use it for a Playstation 5 or Apple for its next iPhone’,” said Asif Anwar at Strategy Analytics .

Chipmakers were surprised by the panicked reaction of the German car industry, which persuaded Economy Minister Peter Altmaier to write a letter in January to his counterpart in Taiwan to ask its semiconductor makers to supply more chips.

No extra supplies were forthcoming, with one German industry source joking that the Americans stood a better chance of getting more chips from Taiwan because they could at least park an aircraft carrier off the coast – referring to the ability of the United States to project power in Asia.

Closer to home, a source at another European chipmaker expressed disbelief at the poor understanding at one carmaker of how it operates.

“We got a call from an auto maker that was desperate for supply. They said: Why don’t you run a night shift to increase production?” this person said.

“What they did not understand is that we have been running a night shift since the beginning.”

While Infineon, the leading supplier of chips to the global auto industry, and Robert Bosch, the top ‘Tier 1’ parts supplier, both plan to commission new chip plants this year, there is little chance of supply shortages easing soon.

Specialist chipmakers like Infineon outsource some production of automotive chips to contract manufacturers led by Taiwan Semiconductor Manufacturing Co Ltd (TSMC), but the Asian foundries are currently prioritizing high-end electronics makers as they come up against capacity constraints.

Over the longer term, the relationship between chip makers and the car industry will become closer as electric vehicles are more widely adopted and features such as supported and autonomous driving develop, requiring more advanced chips.

But, in the short term, there is no quick fix for the lack of chip supply: IHS Markit estimates that the time it takes to deliver a microcontroller has doubled to 26 weeks and shortages will only bottom out in March.

That puts the production of 1 million light vehicles at risk in the first quarter, says IHS Markit. European chip industry executives and analysts agree that supply will not catch up with demand until later in the year.

Chip shortages are having a “snowball effect” as auto makers idle some capacity to prioritize building profitable models, said Anwar at Strategy Analytics, who forecasts a drop in car production in Europe and North America of 5% -10% in 2021.

“Up to the end of the second quarter, the industry will have to manage at the lean inventory level,” Chery told a recent Goldman Sachs conference.

Pakistan to remain on FATF ‘greylist’