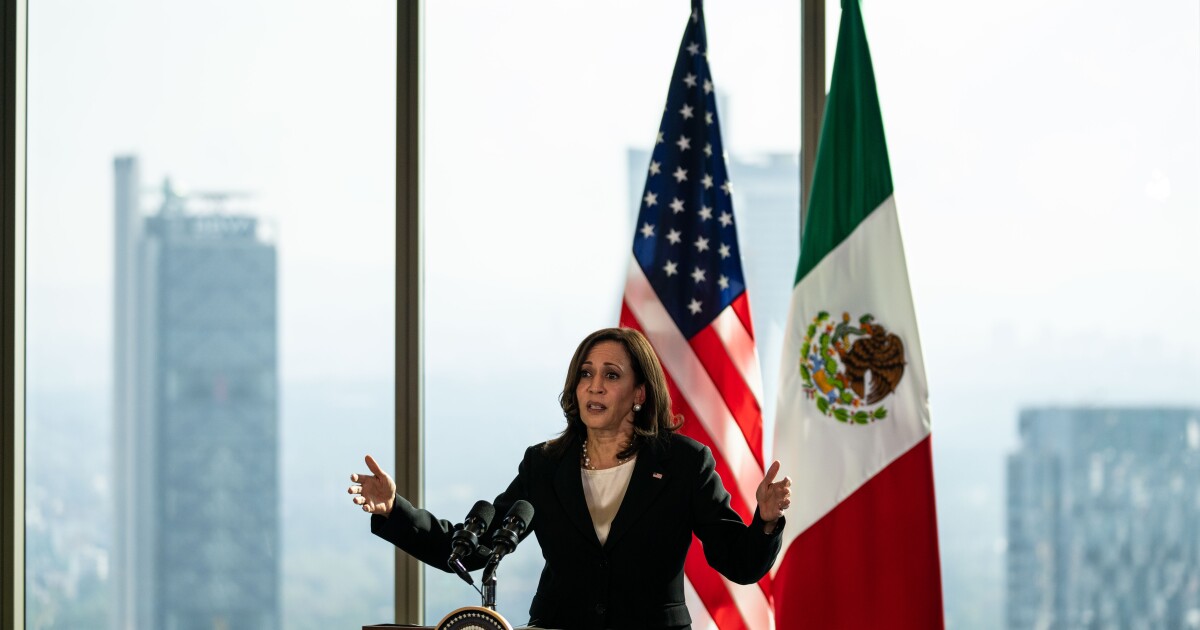 But when Vice President Kamala Harris gave a high-profile speech Monday in Guatemala, in which she told would-be immigrants from Central America “do not come” to the United States, her words instantly provoked ripples of anger and concern among immigrant rights groups and progressives.

Many took to social media and the airwaves condemning Harris’ blunt rhetoric as “disappointing” and “tone-deaf.” Among the critics was Rep. Alexandria Ocasio-Cortez (DN.Y.), who defended the rights of asylum seekers and lambasted decades of US foreign policy for “contributing to regime change and destabilization in Latin America.”

Among some recent Central American immigrants, the reaction to Harris’ hard-edged statement was eye-rolling surprise.

“They aren’t going to listen to her,” said Luz, who fled a working-class neighborhood in San Pedro Sula, one of the hemisphere’s most violent cities, and asked that her full identify not be made public because of gang threats against her life.

“It’s not like people want to leave. People are desperate because of poverty or because of the violence and corruption in these countries.”

Luz, a lesbian, said she was harassed at school and raped on several occasions by gang members because of her sexual identity.

“We all have the right to a better life,” she said. “And, believe me, in Honduras … for people like me, it’s not a good life.”

Portillo Villeda said that telling migrants not to come fails to take into account the historical involvement by the US government and multinational corporations in Central America, sometimes creating hardships that spurred mass migrations.

Portillo Villeda said it was a safe choice for Harris to deliver the comments from Guatemala. Harris might have faced harsher critiques in El Salvador or Honduras, Portillo Villeda said, whose presidents are not as friendly with the new US administration.

“How do you show up to Guatemala and tell Central Americans how to behave?” she said.

The uproar underlines the formidable diplomatic task that President Biden handed Harris when he made his highest-profile point person on immigration policy.

Since entering the White House, the Biden administration has labored to reassure supporters that it would gradually review, and probably reverse, Trump’s harshest measures, while managing a seasonal surge of arrivals at the border earlier this year, including large numbers of unaccompanied children.

Yet Harris’ message wasn’t primarily directed at fellow Democrats and left-leaning activists, nor was it meant for thousands of desperate Central Americans fleeing poverty, violence, ecological degradation and corruption, who probably will ignore it anyway, said Roberto Suro, a public policy professor at USC who has studied immigration for decades.

Rather, some analysts suggested, Harris was signaling to moderates and other US voters that the administration has the southern border under control, and pushing back against Republicans and conservative pundits who’ve taken to railing about an ongoing immigration “crisis“

“The audience for that message is in the US, people here who are on the fence on immigration. People who see the arrivals at the border as a sign of chaos, loss of sovereignty or a broken system,” Suro said. “For people across the political spectrum who are not happy with the way the US has been managing the border.”

Just before Biden took office, record numbers of lone migrant children from Central America began arriving in Texas and other border states. Many of them are seeking asylum, which has been drastically curtailed in previous years.

The rise of child migrants stretched the ability to safely detain and shelter them, especially since the Trump administration had dismantled much of that infrastructure. This led to reports of overcrowding and squalid conditions.

That situation has left a “big blemish” on an otherwise successful first few months in office for the Biden administration, said Louis DeSipio, a political science professor at UC Irvine.

Eleanor Acer, refugee protection director at Human Rights First, called the administration’s messaging a misstep that comes off as hypocritical.

“When the US is out there encouraging other countries to uphold their commitments to refugees but sending a strong signal that it’ll continue to violate its own international refugee law obligations — it undermines the country’s credibility,” she said.

Harris’ visit to Guatemala as her first foreign trip as vice president underscored the new administration’s stated intention of dealing with the “root causes” of immigration, including social and ethnic inequality and bloodshed stemming from decades of warfare and gang rivalries.

Taking a different diplomatic tack, Harris said the US would send 500,000 COVID-19 vaccines to Guatemala and provide $26 million to fight the pandemic there.

Lorella Praeli, president of Community Change Action, a progressive group based in Washington that advocates for immigrants, said Harris had turned her back on her promises to immigrants. She was disappointed in Harris, the daughter of immigrants, and a champion of immigration reform as a California senator.

Praeli said she worries the Biden administration has fallen into “the trap that the GOP has laid out for them.” She disagreed that Harris had misspoken. But she thinks the message will backfire.

“The ‘do not come’ message in my view is a political calculation that they have made,” she said. “Investment in root causes does not change our country’s legal and moral obligations to people fleeing violence and persecution and seeking safety at our borders. It’s not a quid pro quo.”

Overall, some analysts said, Harris’ stance on immigration enforcement didn’t differ notably from that of many previous administrations.

“I don’t think this should come as a surprise,” DeSipio said.

In a March interview, Biden also told migrants “don’t come over.” And some of his policies have advanced beyond that rhetoric.

Most significant in policy terms, the Biden administration has kept in place the Trump-era pandemic measure known as Title 42, one of the most controversial and restrictive immigration strategies ever implemented at the US-Mexico border.

The policy, which relies on an obscure 1944 public health statute, closed the border to all nonessential travel and authorized the expulsion of asylum seekers without due process, making migrant children and parents easy prey for criminal groups waiting just on the other side.

Immigration advocates have pointed to the continuation of Title 42 as evidence that, despite its less abrasive language, the Biden White House hasn’t broken with Trump’s punitive approach.

But if that was the message her critics took from Harris’ visit to Guatemala City, it remains to be seen whether her words ultimately will carry any more weight than did similar ones by the previous president.

“Trump said ‘don’t come’ very forcefully ‘and if you do come we’ll separate you from your children,’ and that still doesn’t stop people,” Suro said.

Vladimir Putin chafes at US, criticizes its response to Capitol siege...

Elise Stefanik gushes about Trump as she is elected GOP conference...

Video: Two bees are seen opening the lid of the bottle,...