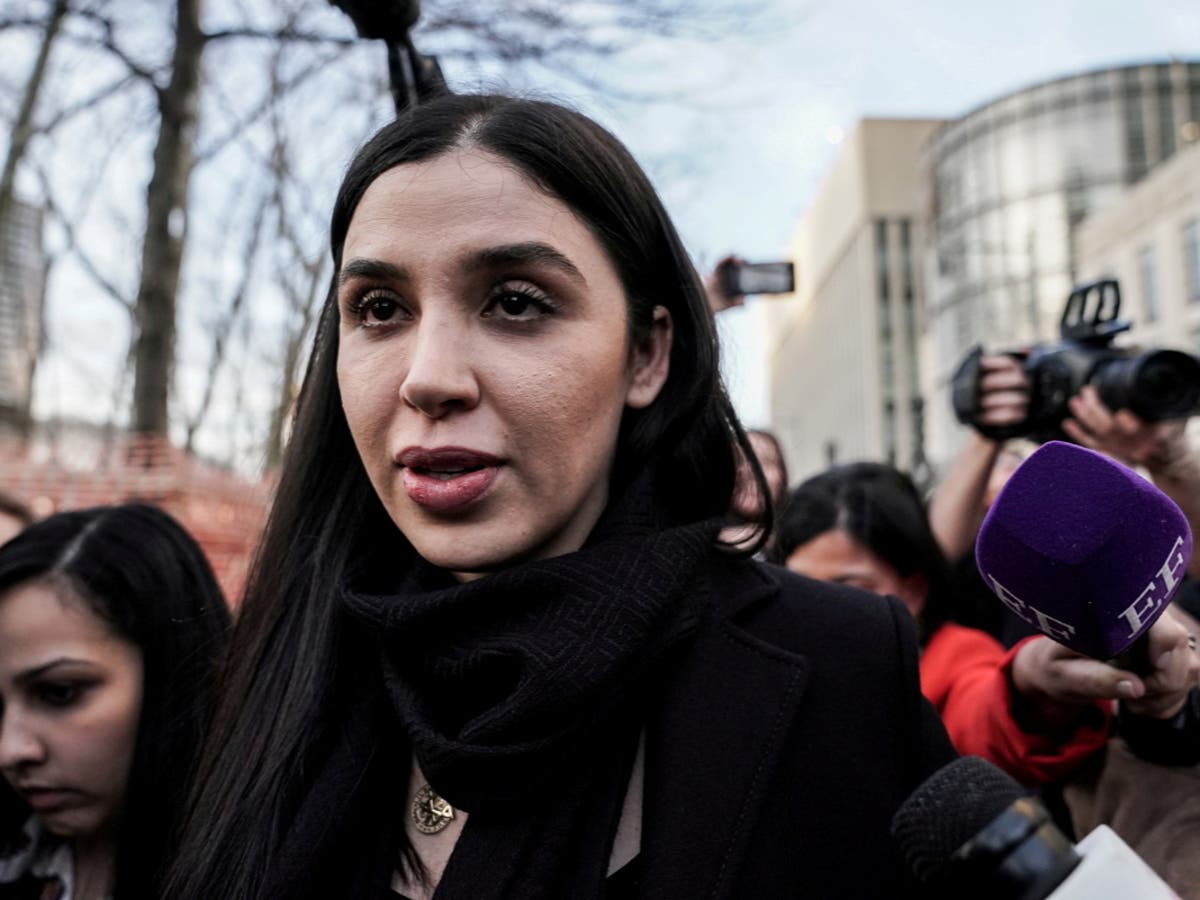 The US-born beauty queen appeared in a Federal District Court in Washington on Thursday to enter her plea on international drug trafficking charges.

She is also accused of helping plot her husband’s 2015 escape from a prison in Mexico, as well as helping plan another jailbreak once he was recaptured in 2016.

The 31-year-old pleaded guilty to three counts – including conspiracy to distribute cocaine, methamphetamine, heroin and marijuana for importation into the United States. Her sentencing hearing was scheduled for September.

Ms Coronel Aispuro had initially appeared to have no role in his criminal enterprise during her husband’s trial, but was arrested in February this year at Dulles International Airport in Virginia.

Emma Coronel Aispuro, 31, has entered a plea of ​​guilty on charges related to her involvement in her husband’s Sinaloa Cartel.

She pleaded guilty to three counts: Conspiracy to distribute cocaine, methamphetamine, heroin and marijuana for importation into the United States; conspiracy to launder monetary instruments; and engaging in transactions and dealings or properties of a designated narcotics trafficker.

United States prosecutor Anthony Nardozzi was asked by the judge to lay out the government’s case against Emma Coronel Aispuro ahead of her pleading guilty, which included her involved in large-scale drug trafficking.

The case also involved Ms Coronel Aispuro using “controlled commercial and residential properties” owned by her husband, El Chapo. She was also accused of deriving an income from those properties by renting them out.

Mr Nardozzi said that Ms Coronel Aispuro violated the Kingpins Act because she is a United States citizen, which prohibits people from having “financial entanglements” with a sanctioned narcotics trafficker.

The woman was also accused of helping her husband escape Mexico prison in 2015 through a tunnel with the help of her sons.

“The government would prove each of the three counts in the information by a variety of means. Those would include witness testimony, evidence generated by law enforcement investigation, and other means,” Mr Nardozzi said.

El Chapo’s wife waives right to a trial by jury

Emma Coronel Aispuro has waived her rights to a trial by jury and potentially appealing her charges ahead of pleading guilty.

“To summarize, if you plead guilty in this case and I accept your guilty plea, you will give up all those rights I just explained to you, because there will not be any trial and there will probably be no appeal … do you understand that ?” Judge Rudolph Contreras asked Ms Coronel Aispuro.

At the start of court Judge Contreras asked: “I gather that Ms. Coronel Aispuro wishes to enter a plea of ​​guilty today, is that correct?”

Emma Coronel Aispuro will appear in front of the United States District Court of the District of Columbia imminently.

She is expected to plead guilty for international drug trafficking charges, according to court records.

It was not clear if the court hearing will reveal if El Chapo’s wife is cooperating with federal authorities.

How did ‘El Chapo’ escape from a high-security prison?

How did ‘El Chapo’ escape from a high-security prison?

Emma Coronel Aispuro looks expressionless in her booking photograph by Alexandria Sheriff’s office following her arrest in February. The former beauty queen posed for the mug shot after being booked at Alexandria Adult Detention Center on 22 February 2021 in Alexandria, Virginia.

In 2015, police in Mexico and the US have uncovered an 875-yard drug-smuggling tunnel linking the Mexican city of Tijuana to San Diego in California used by the Sinaloa cartel.

The passage was believed to be one of the longest ever constructed beneath the US-Mexican border, and connecting two warehouses in the neighboring cities and is approximately 10m underground.

It had lighting, ventilation, and a rail system to move loads from one end to the other. It is said to have been built for the Sinaloa cartel, which controls the region’s drug trade.

Take a closer look at the tunnel used by the cartel:

El Chapo’s wife goes from obscurity to celebrity to arrest

Despite her status as the wife of the world’s most notorious drug boss, Joaquín “El Chapo” Guzmán, Emma Coronel Aispuro lived mostly in obscurity — until her husband went to prison for life.

Then, suddenly, she was a presence on social media. There was talk of launching a fashion line. Even an appearance on a reality show dedicated to the families of drug traffickers.

Until the trial, “Emma had remained anonymous like practically all of partners of Sinaloa cartel capos,” said Adrián López, executive editor of Sinaloa’s Noroeste newspaper. Then, “she begins to take on more of a celebrity attitude. … This breaks a tradition of secrecy and a style specifically within the leadership of the Sinaloa cartel.”

Reporting by the Associated Press

The kingpin made two prison breaks before being extradited to the US and locked up in the federal Supermax prison in Florence, Colorado, following his 2019 trial.