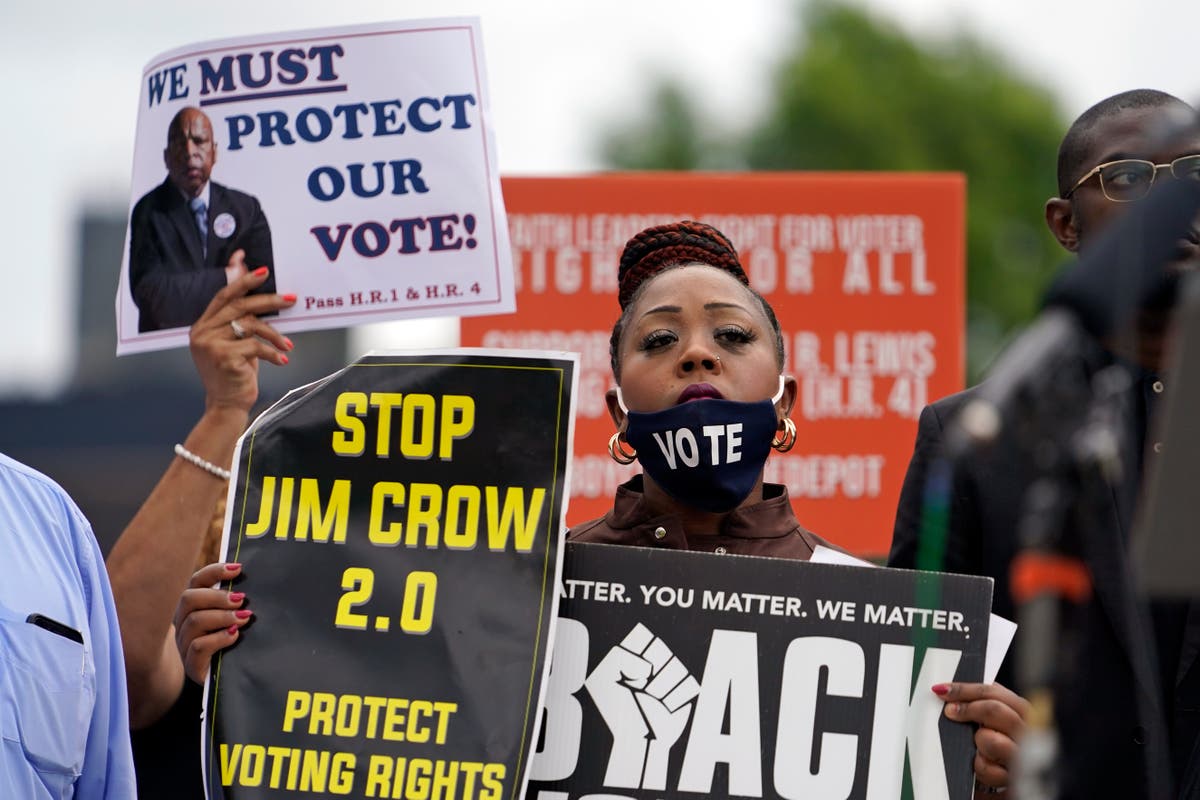 
The Democratic Party’s hopes of passing a massive overhaul of elections may have suffered a fatal blow when West Virginia Sen. Joe Manchin became the first member of the party to say he wouldn’t support it, ensuring the bill, known as HR1, would not pass the Senate

There’s a big difference between the two bills. HR1 is an ambitious proposal that would transform every aspect of elections and campaigns across the country, including how they’re financed. Written in 2017, when Democrats were out of power, it is what is often referred to as a messaging bill — a proposal for candidates to tout on the campaign trail and not crafted specifically to garner enough votes to pass a narrowly-divided Congress.

In contrast, the John Lewis Act is a comparatively narrow bill designed to fix a specific problem, in this case, addressing a 2013 Supreme Court ruling that made it harder for the federal government to block racially discriminatory voting laws and redistricting proposals.

Democrats will struggle to get either bill through Congress, as they look for a way to combat what they view as a Republican-assault on voting rights in state legislature. Here’s a look at the differences between the bills:

WHAT’S IN THE BILLS?

HR1’s number shows its importance to Democrats. Also known as the For the People Act, it became HR1 because it was the first bill on the House floor after Democrats retook the chamber in the 2018 elections. (The Senate version is known as S1.)

The bill does a little about a lot of topics. It changes the way people vote by automatically registering every eligible citizen, guaranteeing mail and early in-person voting options in every state and effectively neutering voter identification laws.

The legislation would also establish bipartisan commissions to draw the lines for legislative districts and require redistricting not favor either major party. The provision has the potential to create scores of newly competitive districts and, proponents say, would combat the partisan polarization in the House.

The bill would provide $6 in public money to campaigns for every $1 in small-dollar donations they raise. Finally, it’d require groups currently shielded from disclosing their donors to identify their funders. The last provision targets a 2010 Supreme Court ruling, known as the Citizens United decision, that lets “dark money” groups hide their contributors even while getting involved in elections.

The John Lewis Act was written in reaction to a different Supreme Court decision. It tries to effectively reverse the 2013 Shelby County case, in which the court’s conservative majority threw out the formula the federal government used to determine which states had such a history of racial discrimination in elections and were, under the Voting Rights Act, required to have Justice Department approval before implementing new voting laws or redrawing legislative districts.

HR4 would put in place an updated formula designed to meet the court’s Shelby County test. That would once again require about a dozen, mostly Southern, states to get approval from the Justice Department’s civil rights division before making those changes.

The bill would also make it easier for the department to send election observers and for courts to block election law changes for violating the constitutional protections guaranteeing voting rights for all US citizens. And, of course, some of the elements from HR1 could always be added in if the John Lewis Act becomes Democrats’ primary vehicle for an election overhaul.

HOW WOULD THE BILLS EFFECT THE NEW STATE LAWS ON VOTING?

The Democrats’ voting push isn’t happening in a vacuum. Republican-controlled states are passing new voting restrictions at a remarkable clip — the Brennan Center for Justice, a group that supports both HR1 and HR4 bills, tallied up 14 states that have passed 22 laws putting new restrictions on when and how Americans vote. The GOP push has been fueled by former President Donald Trump’s lies that he lost the election due to fraud.

HR1 could neutralize some of these laws because it creates national standards for voting access. For example, new laws in Arizona and Florida that potentially remove from people from the states’ mail voting lists could be moot, because all voters would now have a right to cast ballots by mail.

But the John Lewis Act would have no impact. The Justice Department would only be required to approve new laws, not ones that passed before the bill was approved. What’s more, the bill’s “preclearance” provision would only affect about a dozen states and some additional counties or cities that meet its standard. Manchin has talked about expanding preclearance nationwide, but that could run into problems with the Supreme Court.

Additionally, future laws could only be blocked under the bill’s new legal formula if they were deemed to be racially discriminatory by making it harder for specific racial groups to vote. Laws that present new hurdles for other groups — such as no longer accepting student IDs as voting identification, as Montana as done — could still be allowed.

Most importantly, neither bill would stop a trend of Republicans making it easier for partisan political officials to interfere in elections. In Georgia, for example, the GOP-controlled state legislature now will appoint most members of a board that can replace local election officials. In Texas, Republicans are considering legislation that would make it easier for a judge to overturn an election.

WHAT ARE THE CHANCES OF EITHER BILL PASSING?

Not good. Democrats control the House and Senate, but only narrowly. HR1 has passed the House but is stuck in the Senate, where Manchin’s opposition means the bill doesn’t even get a majority and is nowhere near the 60 votes it needs to break a filibuster and pass. Currently, no Republican backs the bill.

The John Lewis Act hasn’t even been introduced in this Congress because of a lengthy fact-gathering and hearing process required to meet the Supreme Court’s new standard. House Speaker Nancy Pelosi in a letter to colleagues Tuesday predicted the bill won’t be introduced until the fall.

Prior updates to the Voting Rights Act passed the Senate unanimously — 98-0 as recently as 2006 — but earlier versions of HR4 have only drawn one Republican sponsor, Sen. Lisa Murkowski of Alaska. That’s a testament to how partisan even the basic act of voting has become, a phenomenon that predates Trump.

Indeed, the Republican senate leader, Mitch McConnell, on Tuesday blasted the John Lewis Act. “It’s against the law to discriminate in voting on the basis of race already, and so I think it’s unnecessary,” McConnell said.

Time is not on Democratic Senate Majority Leader Chuck Schumer’s side, said Jessica Anderson, executive director of Heritage Action, a conservative group that opposes both bills. “Every day we inch closer to 2022, the harder it is for Schumer to get this to the finish line.”

It’s unclear. He’s the former West Virginia Secretary of State and warns that any voting reform that’s too partisan will simply increase distrust in elections. On the other hand, he says there needs to be some new election overhaul to protect voting rights.

One of those principles may have to give.

New coronavirus discovered by scientists, spreads from dogs to humans

“Help Us Free …”: Parents Of Belarus Critic Arrested From Diverted...