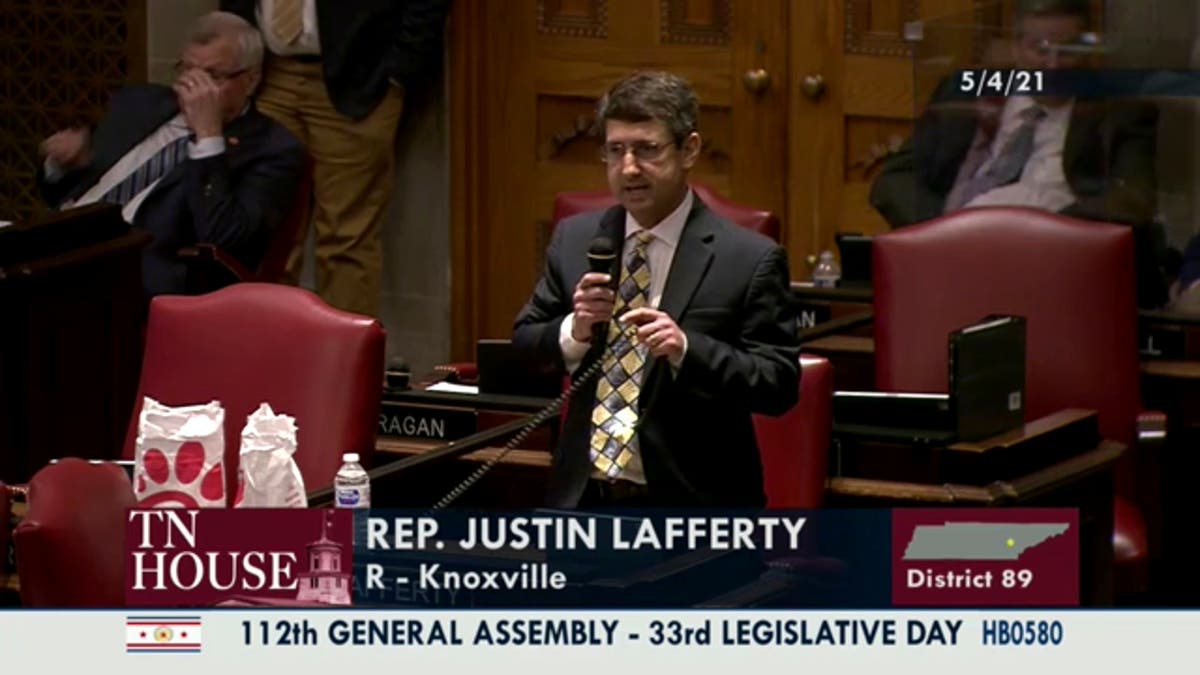 
A Tennessee Republican falsely declared Tuesday that an 18th century policy designating a slave as three-fifths of a person was adopted for “the purpose of ending slavery,” commenting amid a debate over whether educators should be restricted while teaching about systematic racism in America

During lengthy debate on the GOP-controlled house floor, several Black Lawmakers expressed concerns about the bill’s impact on how certain subjects would be taught in schools, specifically highlighting the Three-Fifths Compromise. The policy was made during the nation’s Constitutional Convention in 1787 and classified that three-fifths of a state’s slave population could be counted toward its total population when apportioning taxes and states’ representation in Congress.

Lafferty, who is white, stood up and talked at length about what he saw as sparking the compromise. At one point he asked colleagues to note on paper their best guess for the reasons that led to the policy.

“By limiting the number of population in the count, they specifically limited the number of representatives who would be available in the slave holding states and they did it for the purpose of ending slavery,” Lafferty said. “Well before Abraham Lincoln. Well before Civil War. “

None of the other lawmakers in the chamber directly challenged Lafferty’s false claims but some applauded when he finished talking.

Rep. Antonio Parkinson, a Memphis Democrat and chairman of the General Assembly’s Black Caucus, said in a later statement that Lafferty’s comments were troublesome.

“Rep. Lafferty’s statement about how the Three-Fifths Compromise was created to end slavery was alarming but the real insult was when the House Republicans clapped for him when he finished his diatribe, ”he said.

Parkinson added that conversations about race in the Tennessee Legislature have always been “very uncomfortable.”

A spokesperson for the House Republican caucus did not immediately return emailed questions on Lafferty’s comments.

While the House overwhelmingly approved the legislation on Tuesday, the GOP-controlled Senate chamber refused to accept the House bill hours later. Its fate now remains unclear in the final days of the legislative session.

Lafferty’s comment echo sentiments expressed last month by Colorado Republican Rep. Ron Hanks last month, who said the Three-Fifths Compromise “was not impugning anyone’s humanity.” In 2019, Oregon Sen. Dennis Linthicum, a Republican from Klamath Falls, argued that the designation of slaves as three-fifths of a person was not racist.

Tuesday’s discussion also comes as a handful of states are considering restrictions on how schools and state agencies should talk about race and racism.

In Oklahoma, lawmakers advanced legislation that would ban the so-called “critical race theory,” which includes prohibiting education instruction that individuals, by virtue of race or gender, are inherently racist, sexist or oppressive, whether consciously or unconsciously. The bill now heads to Republican Gov. Kevin Stitt for his consideration. Meanwhile, a growing number of organizations have organized to urge stitt to veto the measure.

Idaho’s Republican Gov. Brad Little signed off on a similar proposal last week, arguing it was needed to prevent schools and universities from “indoctrinating” students.

Meanwhile, a recently enacted version in Arkansas does not apply to K-12 schools or colleges and universities but instead focuses primarily on employee training.

Republican Gov. Asa hutchinson On Monday allowed the bill to become law without his signature, a move governors have traditionally taken to express displeasure with bills without vetoing them.

The lawmaker behind Arkansas’ measure said it was aimed at preventing “divisive” concepts being taught state employees, particularly by third party groups.

Elsewhere across the country, conservative lawmakers say they fear that white students are being taught that they should be ashamed for past wrongs carried out by earlier generations, such as slavery.

But opponents counter that such measures may be unenforceable and a violation of free speech.

“We are about to engage in a huge encroachment on the First Amendment,” Arkansas Democratic Sen. Linda Chesterfield said in a debate last month.

And in New Hampshire, it remains unclear if a similar bill would prevail after several participants at a public hearing on the budget urged lawmakers to abandon it.

Matthew Houde of Dartmouth-Hitchcock, one of the state’s largest employers, said the bill there would undermine the health system’s efforts to advance “diversity, equity, inclusion and belonging.”

The spelling of Matthew Houde’s last name has been corrected in the final paragraph.

Raushan - April 30, 2021 0
Computer
In today's modern era it has become very important to keep all your software up to date. Today, it is mandatory to have...

27 dead, passenger ship drowned after collision with cargo ship in...

People will be able to stay on 400-year-old island: the first...