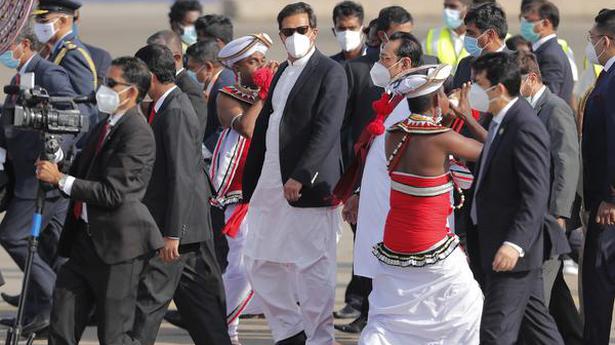 
Pitching the China-Pakistan Economic Corridor (CPEC) as a connectivity booster, Prime Minister Imran Khan, in Colombo on a two-day visit beginning on Tuesday, said Pakistan would find “ways and means to enhance trade and connectivity” with Sri Lanka.

“Pakistan is part of the One Belt and Road initiative of China, and CPEC is one of its flagship programmes. And it means connectivity, ”he said hours after his arrival. The CPEC, Mr. Khan said, would help enhance Sri Lanka’s connectivity “right up to Central Asia”, while trade ties would bring Pakistan and Sri Lanka “closer together”.

Mr. Khan is the first head of government to visit Sri Lanka since the pandemic struck the world. He held a one-on-one bilateral meeting with counterpart Mahinda Rajapaksa on Tuesday evening, and is scheduled to meet President Gotabaya Rajapaksa on Wednesday.

Mr. Khan will also lead the delegation-level talks, covering “all areas of cooperation” between the two countries, including trade and investment, health and education, agriculture, science and technology, defense and security, and culture and tourism, the Pakistani mission here said.

“Several MoUs” in these areas were signed on Tuesday, according to a tweet from Prime Minister Rajapaksa.

Mr. Rajapaksa, who received the visiting leader at the Bandaranaike International Airport – he was accorded a red-carpet welcome with a 19-gun salute – said Mr. Khan’s visit, despite the pandemic, symbolized the “deep affinity” that he and his government had for Sri Lanka.

“I admire your courage and the great leadership that is evident in important decisions you have taken at times of crises,” Mr. Rajapaksa said, likening Mr. Khan’s political leadership to his time as captain of the Pakistani cricket team.

“Your people-centric governance agenda goes hand in hand with my own government’s approach towards empowering the grassroots level communities and underprivileged,” Mr. Rajapaksa said, adding that bilateral ties had become an “all-weather” friendship.

In addition to trade cooperation, Mr. Khan invoked cricket and Buddhism, topics that most Sri Lankans share a deep connection with.

He commended the Sri Lankan cricket team for emerging as a world-class team from the subcontinent, and spoke of Buddhist heritage linking the two countries, inviting Sri Lanka’s Buddhists to “one of the greatest Buddhist heritage” sites in the world.

Meanwhile, members of Sri Lanka’s minority Muslim community held a demonstration on Tuesday, urging the government to reverse its mandatory cremations policy for COVID-19 victims. Carrying a mock coffin, they denounced the government’s policy enforcing cremations, in a protest near the Presidential Secretariat, aimed at drawing Mr. Khan’s attention.

Weeks before his arrival, Mr. Khan had welcomed – on Twitter – an announcement made by Prime Minister Rajapaksa in Parliament that burials would be allowed. However, Colombo backtracked a day later, sparking renewed concern among Sri Lanka’s Muslims. Mr. Khan did not refer to the issue in his speech on Tuesday.

The Sri Lankan government, which had earlier said Mr. Khan would address Parliament, canceled the programme closer to his arrival, citing “scheduling issues” and safety concerns linked to the pandemic.

Michelle Pfeiffer, 62, reveals that, after being one of the leading...

Biden to deepen global alliances and compete with China