Wanted diamond businessman Nirav Modi in PNB scam has appealed in the UK High Court against the decision to extradite India. It has filed a petition seeking permission to challenge the court’s extradition decision and its decision to approve the UK Home Ministry. Earlier in February, the last hearing on Nirav’s extradition took place in the Westminster Court of Britain. The court had approved to send Nirav to India. After this, on 16 April, the UK Home Ministry also approved the handing over of Nirav to India. After this, it was decided to come to India.

Judge Samuel Gooji said that Nirav Modi will have to answer in the case going on in India. He admitted that there is enough evidence against Nirav Modi. The decision came after a 2-year legal battle. Nirav Modi is accused of committing fraud of around 14 thousand crores by taking a loan from PNB. He escaped from the country in January 2018 after the scam surfaced. 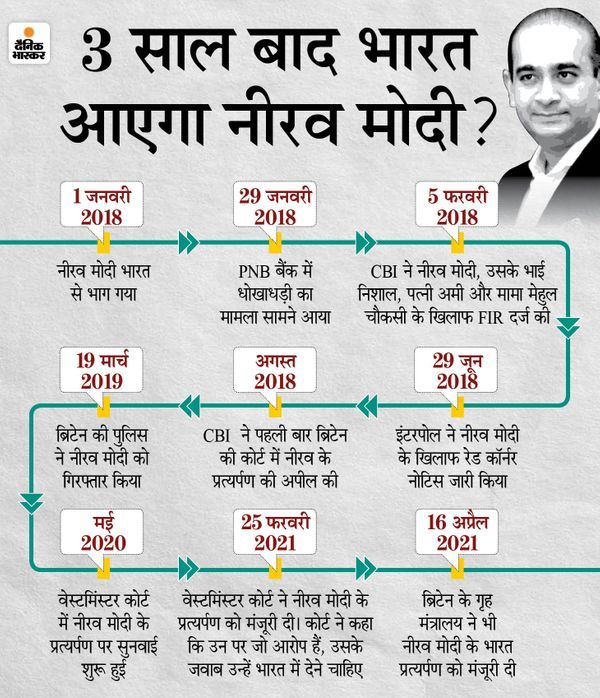 The court said – Nirav will get justice in India
The judge said that if Nirav Modi is sent to India, it is not that he does not get justice there. The court has also rejected the argument that Nirav Modi’s mental condition is not correct. Said that he does not think he has any such problem. The court said barrack number-12 of Mumbai’s Arthur Road Jail was fit for Nirav. Nirav Modi, arrested on March 19, 2019, is accused of conspiracy to commit money laundering, tampering of evidence and intimidating witnesses.

what will happen now?
1. Indian investigative agencies will have to prove in court that the charges against Nirav are also a crime under UK law.
2. If the charges are proved, the High Court can order the extradition of Nirav.
3. The High Court will also see whether the extradition of Nirav will result in voiding of human rights.
4. In such a situation, it may take at least 10 to 12 months for Indian agencies to bring Nirav to India.