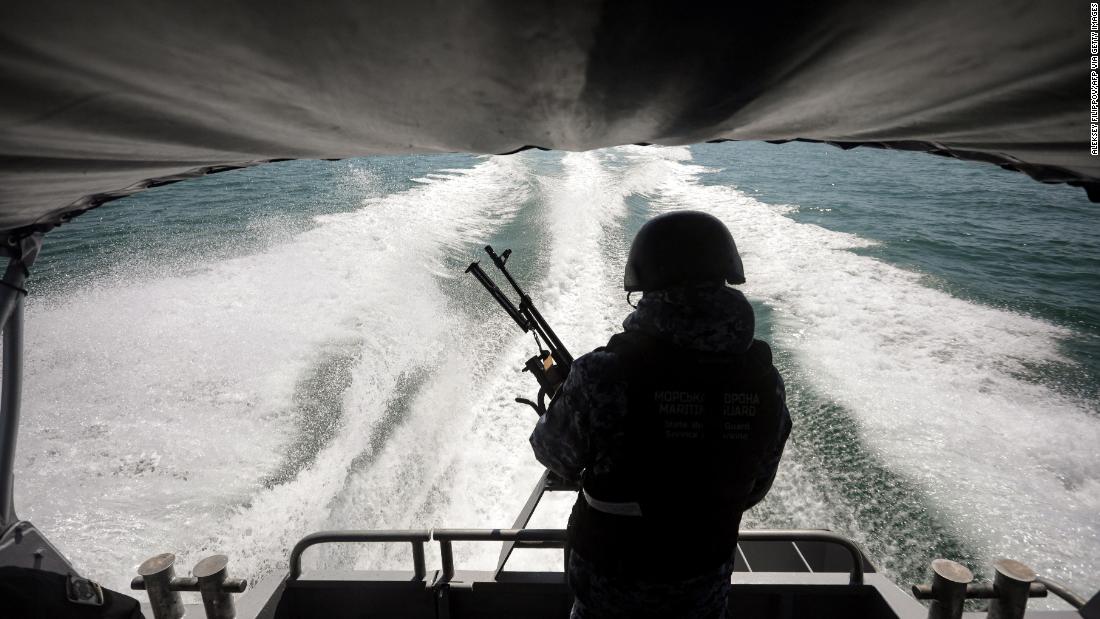 At the stern, a gunner tightly grips the handles of a single heavy machine gun bolted to the rear, carefully scanning the horizon for any threat.

An hour into the coastal patrol, in rough seas about 5 nautical miles off the Ukrainian coast, a crackled radio message cuts through the dull drone of the diesel engines and the lightly armed vessel abruptly comes about.

“We are reminding you to keep a safe distance,” the operator warns.

Up ahead, a Russian coastal protection ship looms on the horizon, a floating steel gatekeeper to the growing naval force assembling in the seas beyond.

The message is clear: go no further.

“If we don’t turn around, there will be trouble,” says Cmdr. Nikolay Levitskiy, of the Ukrainian Marine Guard.

The Russian defense ministry makes no secret of what that trouble could involve. In its muscle-flexing show of naval strength in one of the world’s smallest seas, it has released dramatic images of ships launching barrages of missiles screeching across the waves.

The Kremlin insists this is just a naval drill, an exercise that does not pose a threat to anyone. It talks of the achievement of a flotilla of 15 vessels heading from the landlocked Caspian Sea via a 60-mile (100km) canal with 13 locks to the Black Sea basin.

But Ukrainian military officers, just a few miles away, are watching the buildup with concern.

“The last two weeks, it has become more dangerous because the Russian Federation has sent several landing ships from Baltic Sea and the North Sea,” says Capt. Roman Goncharenko, of the Ukrainian Navy in Mariupol.

“Officially it’s exercises. But those ships are still here in this area, and in our vision it can be dangerous,” he told CNN from the deck of the Soviet-era Donbas, a rusty search and rescue ship, built in 1969 and docked in the port city.

Buildup on land and sea

The naval buildup follows international alarm at a recent surge of Russian land forces near the border with Ukraine and in Crimea, annexed by Russia in 2014.

Tens of thousands of Russian troops, backed by armored columns, were seen heading towards eastern Ukraine, where Russian-backed rebels have been fighting a grinding separatist war with government forces in which thousands have died.

Ukrainian President Volodymyr Zelensky gave CNN unprecedented access last month when he went to the most forward positions in a show of support for his frontline troops.
The Kremlin also said the troop movements were “military drills,” eventually announcing a drawdown of forces late last month, although US officers say it is unclear how many Russian troops have been pulled back.

US Pentagon spokesperson John Kirby said on Monday there were “still quite a few” Russian forces along the border with Ukraine, and in Crimea.

US Secretary of State Antony Blinken will be in Kiev this week to meet his Ukrainian counterpart and Zelensky. The State Department says he intends to “reaffirm” US support for Ukraine in “the face of Russia’s ongoing aggression.”

Ukraine asserts that aggression now violates international law by restricting access to the Sea of ​​Azov, which Russia and Ukraine agreed to share in a 2003 agreement.

Ukrainian officials say commercial shipping along a key route to the east is facing additional checks and delays, but Russia insists the traffic is not banned.

This is not the first time Russia has exerted its naval power of Ukraine. In 2018, the Russian coast guard rammed a Ukrainian tugboat in the area. Russian ships fired on Ukrainian naval vessels, seizing three and detaining 24 sailors. Both sides accused the other of violating the laws of the sea.

American ships have been challenged too. Earlier this year, a low pass by a Russian warplane in the Black Sea was witnessed from the deck of US destroyer USS Donald Cook.

The tension on the choppy waters of the Sea of ​​Azov is visible on land too. In Mariupol, a dozen Ukrainian marines, dressed in combat fatigues and balaclavas, practice maneuvers, patrolling the harbor with their rifles at the ready, conducted what they say are anti-sabotage drills.

Ukrainian naval officials say they have no choice but to plan for a possible Russian assault and that more ground forces are on standby to be deployed in the event of an attack.

They already call Russian action on the Sea of ​​Azov a “creeping occupation” of the region.

“Russian ships increasingly behave aggressively, entering forbidden areas, or places where they should have permission from the Ukrainian authorities,” says Levitskiy, the patrol boat commander.

After the Ukrainian coastguard vessel was warned by the Russian ship about getting too close, CNN asked him what would happen if we did not turn back. The helmsman shouted, “It would be very dangerous.”

Levitskiy looked at him disapprovingly and demurred, saying only, “it may not be good.”

A new Suez crisis: how a ship got stuck in the...