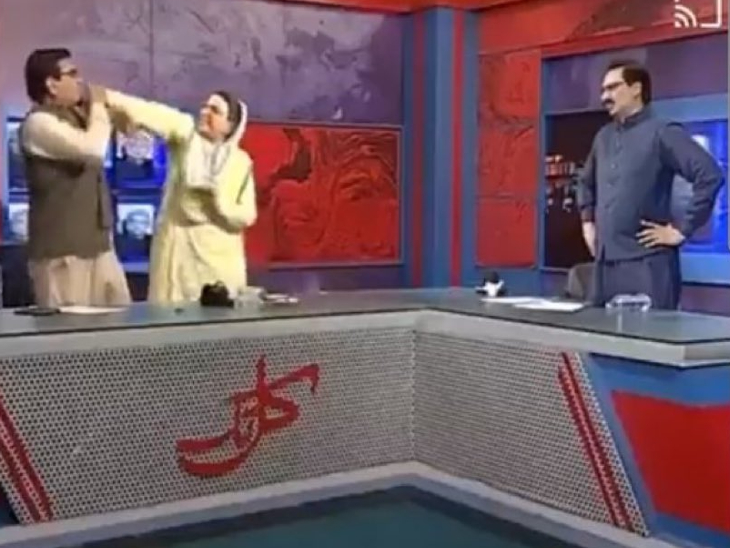 Awan slapping Qadir and watching all this under compulsion, Anchor Javed Chaudhary.

Firdous Ashiq Awan, former Special Assistant to the Prime Minister of Pakistan Imran Khan and currently the advisor to the CM of Punjab province, is again in the headlines. On Wednesday night, Firdaus had reached a channel’s debate. Pakistan Peoples Party MP Qadir Khan Mandukhel was also present in this. When Qadir mentioned about the death of 67 people in the train accident that happened in the past and the severe power shortage in the country, Awan flared up. He caught Qadir’s gibe during the live show itself, then slapped him. Its video is going viral on social media.

Imran doesn’t like question
It is scorching heat in Pakistan right now. There is acute shortage of electricity in all the cities of the country. Last month, due to grid failure, there was power outage across the country for four hours. In many cities, including Karachi, electricity is missing for 20 hours. Last week there was a train accident in Ghotki. 67 people were killed and more than 500 were injured. The government did not even bother to get it investigated. Now people and opposition are asking questions on these issues, then Imran is silent and his party people are beating up against the opposition.

fight in live show
Awan was attending the live show of ‘Express TV’ on Wednesday night. Opposition MP Qadir Khan was also present. Famous anchor Javed Choudhary was the host. Two months ago, Foreign Minister Shah Mehmood Qureshi also lost his cool in the same show. However, questions on train accidents and power cuts left Awan baffled. At first she screamed for a while and later suddenly stood up. Qadir and the anchor also stood up. First Avan caught Qadir’s gibbous and later made a slap receipt.

Qadir alleged that Awan’s name had cropped up in the bus scam, due to which Imran had removed him from the federal cabinet and sent him to the government of Punjab province. Awan accused the media of showing only one side of the controversy. Qadir demands that Awan must apologize to the nation.

Avan was in controversies last month too
In January, Awan had said in an interview – Kashmir and India’s churan (that is, rhetoric on these matters) sells the most here. Therefore, we also take up these matters. Last month, a few days before Eid, Awan had reached a market in Lahore. Here he misbehaved with a female assistant commissioner. For this he also got a reprimand from Imran.

Saudi talks up strength after US cuts military assets – Times...