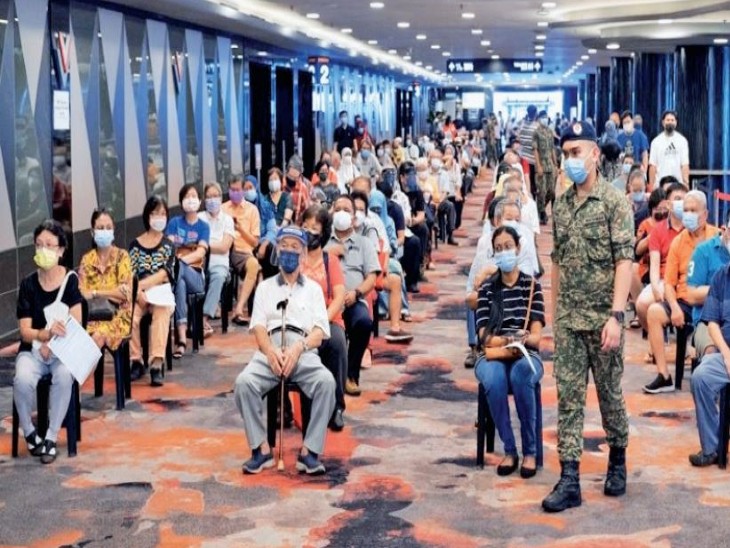 It has been 23 days since Britain was unlocked and now new cases of corona have started increasing there. A record 7540 new cases of corona have been found in Britain on Wednesday after 103 days. Earlier on February 26, 7401 cases were found. With this, the fear of a third wave of corona in Britain has intensified. However, there is still doubt on the lockdown. Because, the lockdown will take place only when the cases will increase continuously till June 21.

According to the report, there has also been an increase in weekly cases in Britain. For a week, more than 5500 new cases are being reported in the country. This is the first time 165 days after Christmas last year, when weekly cases of corona in Britain have increased by 90%. According to British scientist Professor Neil Ferguson, cases are increasing rapidly in Britain due to the delta variant.

He said that new cases could increase further for the next two to three weeks. However, some experts believe that even though cases are increasing in Britain, there is not much danger. Because on Wednesday only 6 patients died in the whole country and 2234 people were cured. So far 45.3 lakh corona patients have been found in Britain. 1.28 lakh people have died.

In Malaysia, 3.7% i.e. 11.8 lakh people have received both doses of the vaccine. Malaysia has set a target to vaccinate the entire population of 32 million people in 100 days to defeat the epidemic. On Wednesday, the rate of vaccination in the country was recorded at 1.10 lakh per day. At the same time, the King of Malaysia met the leaders of the country on Wednesday to discuss the new strategy.

The deteriorating situation in Malaysia; No space in hospitals, ICUs are also 100% full

The Health Ministry of Malaysia said that more than 8 thousand cases of corona are being reported in the country every day. Because of this all the hospitals are full. ICU is 100% full. Two patients have to be treated on one bed. Health Director Dr. Noor Hisham Abdullah said that this week 82,797 new cases of corona were found, which is a record till now.

Record cases in Indonesia and Russia after 100 days; 25 deaths in one day in Taiwan

Australia will be unlocked on Friday; America has relaxed

Due to increasing infection in Australia, the lockdown imposed in Melbourne will be opened from Friday. America has relaxed travel ahead of Japan Olympics. The US has asked citizens to reconsider traveling to Japan. At the same time, cinemas, theaters, nightclubs have been closed due to infection in Guangzhou, China.