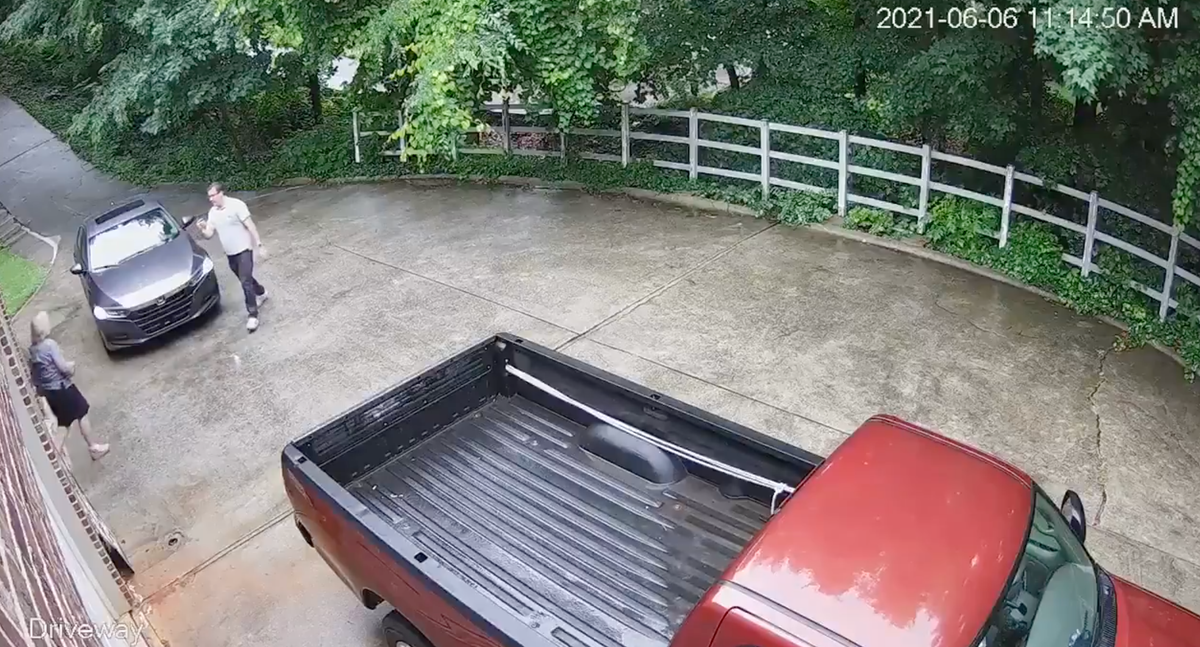 
Republican US Rep Mo Brooks accused a process server of “unlawfully sneaking” into his home and serving his wife in a lawsuit for his role in the Capitol riot, after allegedly avoiding being served in the case for several weeks.

Surveillance footage from the Alabama congressman’s home shows a process server walking towards an open garage door with paperwork and then leaving within roughly 14 seconds.

Mr Brooks claims that the footage is evidence that the process server “trespassed” at his home.

The ongoing legal saga over Mr Brooks’s involvement with the failed insurrection on 6 January, and his weeks of allegations against the attorneys itself and the legal team for the Democratic congressman who sued him, appear to distance himself from the case.

Mr Brooks, who supported a “Stop the Steal” campaign that fueled a pro-Trump mob in an attempt to overturn the results of the 2020 election, told a crowd on 6 January to “start taking down names and kicking ass” before the assault on Congress. He was the first member of Congress to vow to reject the results when a joint session of Congress convened to certify them.

He also asked the crowd that day to consider Americans who sacrificed “sometimes their lives” to create the “greatest nation in world history”.

“Are you willing to do the same?” he said.

The 65-page complaint filed by US Rep Eric Swalwell in US District Court in Washington DC also targets donald trump, Donald Trump Jr and Rudy Giuliani, whose speeches to a crowd before a mob swarmed the Capitol on 6 January were seen as a months-long culmination of an election conspiracy narrative that incited a deadly riot.

Mr Brooks has teased Mr Swalwell while his legal team wrote in court filings that it spent weeks trying to serve him in the lawsuit because of security measures at the Capitol, and Mr Swalwell’s legal inability to personally serve him.

In court filings, the process server said he knocked on the front door and rang doorbells outside Mr Brooks’s home on 6 June, but no one answered.

After leaving and waiting in his car, he noticed a car pulling into the driveway, he said. He followed, got out of his car and approached Mr Brooks’s wife Martha from “two or three feet away” from an open garage door and said “Mrs Brooks, I am serving you with legal paperwork. This is for your husband, Mr Brooks,” according to the affidavit.

She yelled that she wanted him to leave, he said. He replied “OK, I’m putting them on the floor right here” before dropping the papers in front of her, he said.

The video shared by Mr Brooks on Twitter shows a car pulling into the driveway and turning into a garage. Another car quickly pulls into the driveway, and a driver – carrying papers and a cellphone – steps out and jogs to the open garage door.

Roughly 14 seconds later, the driver backpedals from the driveway and back into the car, as Martha Brooks follows. She then quickly walks to the back of the car.

Once she steps away, the driver slowly reverses down the driveway.

Mr Brooks has said he filed a police report regarding the incident.

He said that Mr Swalwell’s “lying attorney falsely claimed that the process server never entered my house (aka trespassed). If so, why do I have this video showing the man chasing my wife into my home?”

“The video shows that there never was any truth to Mo Brooks’ claim that the process server went into the Brooks’ house – as we have maintained all along,” Mr Swalwell’s attorney Philip Andonian told The Independent.

“The video also shows that the papers were validly served and we have filed our affidavit of service to that effect,” he said. “If Mo Brooks wants to challenge service in court, he is free to do so, and we’ll look forward to getting his motion and taking it up with the judge.”

In a post on Twitter from an iPad directed at Mr Swalwell on Sunday, the GOP lawmaker claimed that “HORRIBLE Swalwell’s team committed a CRIME by unlawfully sneaking INTO MY HOUSE & accosting my wife” to serve him in the suit.

He attached a photo of a computer screen with Alabama’s criminal trespassing law, with a sticker below the screen that appears to include a PIN and Gmail password.

Attorneys for Mr Trump have sought to dismiss the case, arguing that he has “absolute immunity” from responsibility because he was the president at the time of the assault.

The lawsuit filed by Mr Swalwell is one of two cases from Democratic lawmakers against Mr Trump and his allies for the attack.

A separate lawsuit from US Rep Bennie Thompson and 10 other House Democrats has accused Mr Trump, Mr Giuliani and members of the Proud Boys and far-right militia groups of a “concerted campaign to misinform their supporters and the public, encouraging and promoting intimidation and violence in furtherance of their common plan to promote” Mr Trump’s re-election, despite his definitive loss.

The defendants have asked a US District Court judge to dismiss that suit as well.