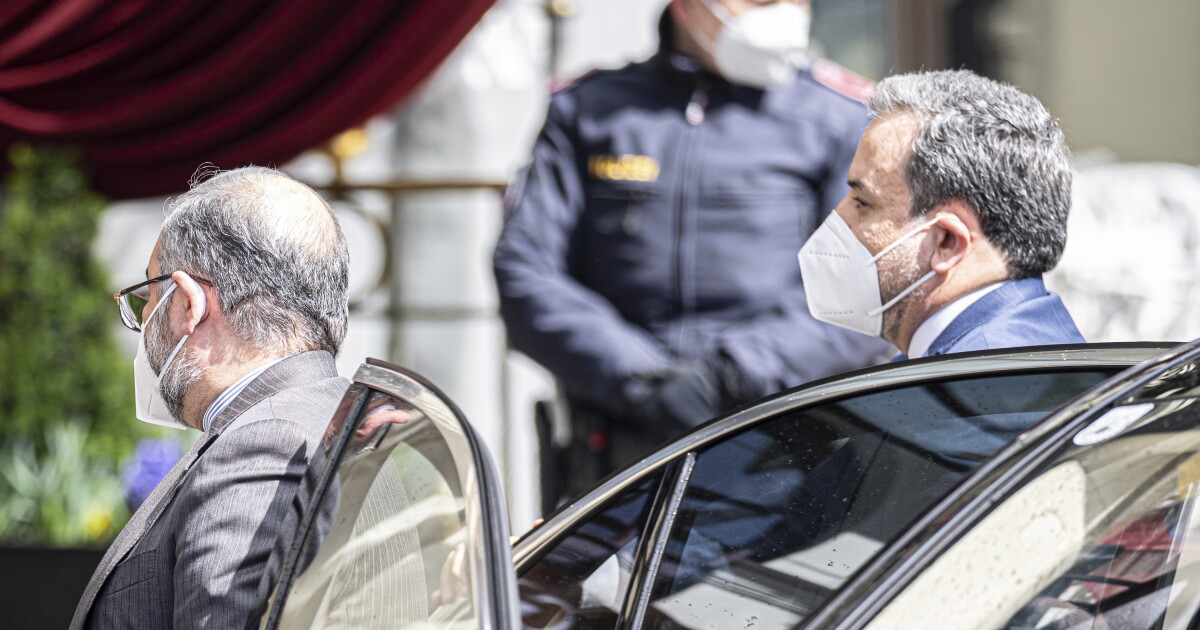 With tempered expectations, the US, Iran and five other world powers began “constructive” talks Tuesday aimed at reviving the 2015 nuclear deal that reined in Tehran’s weapons ambitions but whose resuscitation will require a complicated diplomacy appeasing both Iranian hard-liners and American members of Congress.

The meeting in the Austrian capital, Vienna, is the first contact the United States and Iran have had in years, although it is through “proximity talks,” where the representatives of each country don’t actually sit in the same room.

Day One was “constructive,” the European Union chief coordinator Enrique Mora said. “There’s unity and ambition for a joint diplomatic process with two expert groups on nuclear implementation and sanctions-lifting,” he said. European Officers are serving as go-betweens for the American and Iranian delegations.

The two “expert groups” represent the two areas of central disagreement: what must Iran do to return to compliance with the nuclear deal after having stepped up its enrichment of uranium, and what must the US do to ease the hundreds of sanctions that the previous Administration placed on Tehran to cripple its economy and isolate it diplomatically. Former President Trump unilaterally withdrew from the landmark accord in 2018.

Despite the formidable hurdles, the Biden administration said the talks were an important first step.

The talks in Vienna, which Price said could continue at least through the week, involve Russia, China, Germany, the United Kingdom and France, as well as the European Union, the signatories to the deal that was negotiated after years of often secret talks . President Obama signed on through executive measures, but never got congressional approval.

The US delegation in Vienna is being led by President Biden’s special envoy for Iran, veteran diplomat Robert Malley, who acknowledged the difficulty of winning the support of Congress.

“Hope springs eternal,” Malley told NPR earlier Tuesday. “We work as closely as we can with Congress. And this is a very polarizing issue. We understand that. ”

He pledged that once Iran and the US are back in the deal, the administration will address the objections that many in Washington have: that the deal did not curtail other belligerent Iranian activities such as support for militant groups in the region. The administration will then push for what Biden calls a “stronger, longer” deal.

“The Biden administration made a miscalculation in delaying this process. But Vienna is an opportunity for a course correction, ”said Suzanne DiMaggio, a senior fellow at the Carnegie Endowment for International Peace. “We have more leverage going back into the deal than we do out of it. Right now we have no leverage. “

For the United States, a major complication comes in the sanctions. Many, which prevent Iran from selling oil on the international market or participating in global banking systems, are directly tied to the nuclear question. Those can be eased relatively simply.

But the Trump administration added hundreds of sanctions on Iran based on purported terrorism or human rights violations, which would be much more difficult – politically and technically – for Biden to lift.

Trump opted for what his government called a “maximum pressure campaign” that progressively tightened the screws on the Islamic Republic but failed to alter its behavior.

The Iranian supreme leader has publicly taken a “maximalist” position demanding a full lifting of all sanctions. But on Tuesday, Iran’s lead negotiator in Vienna, Abbas Araghchi, deputy foreign minister, struck an unusually positive note, saying the first round of talks were “on the right track.”

“It’s too soon to say it has been successful,” he told Iranian television.

In late February, Iran began restricting international inspections of its nuclear facilities, but under a last-minute deal worked out during a trip to Tehran by Rafael Grossi, the head of the Vienna-based UN atomic watchdog, some access was preserved.

Under the agreement, Iran will no longer share surveillance footage of its nuclear facilities with the International Atomic Energy Agency, but it has promised to preserve the tapes for three months. It will then hand them over to the IAEA if it is granted sanctions relief. Otherwise, Iran has vowed to erase the recordings, narrowing the window for a diplomatic breakthrough.

Iranian Foreign Minister Mohammad Javad Zarif in March also urged the US to act quickly, noting that as his country’s June elections approach, Washington will find itself dealing with a government unable to make progress in the nuclear talks.

In addition, one of the deal’s major so-called sunset clauses, a United Nations arms embargo on Iran, expired last year and others are set to expire in the coming years.

The small window for negotiation will make it even more difficult for the US to try to bring new concerns into the deal, such as Iran’s regional influence and its ballistic missile program.

White House Press Secretary Jen Psaki said Tuesday that there was value to having US diplomats on the ground in Vienna even though they won’t be in direct talks with Iran.

“I think it’s important to convey to our partners … that we believe diplomacy is the best step forward,” Psaki said.

The Associated Press contributed to this report.

Vaccination of the world’s oldest leaders: Prince of the UK showed...

We are proud: NASA’s Mission Mars was succeeded by Doctor Swati...