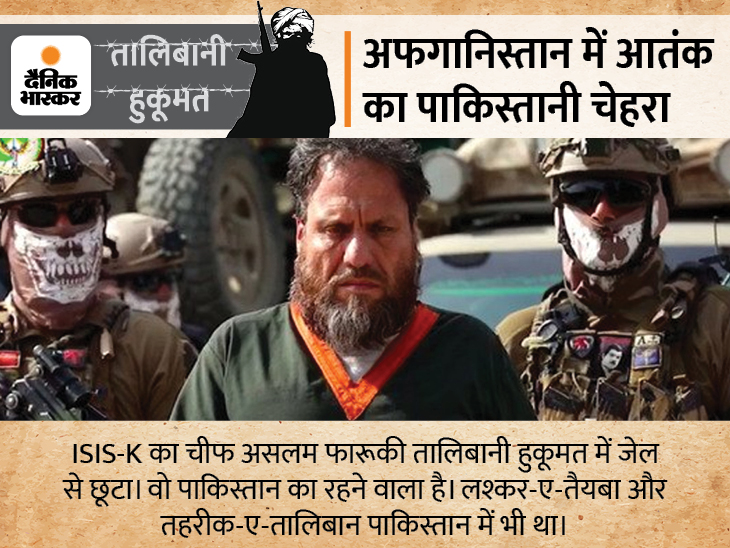 The root of the fidayeen attack on Kabul airport lies in Pakistan. ISIS Khorasan i.e. ISIS-K has claimed responsibility of these blasts which killed more than 100 people. The chief of this terrorist organization is Mawlawi Abdullah alias, Aslam Farooqui. Farooqui is a Pakistani citizen and he started the journey of becoming Chief of Khorasan from there. He was also associated with banned organizations like Lashkar and Tehreek. He had confessed this when Afghan agencies arrested him. That is, the root of the Kabul airport blast is in Pakistan, know-how.

There were two suicide attacks on the Hamid Karzai International Airport i.e. Kabul Airport on Thursday evening. After this, ISIS-K released the name and photo of one of its fidayeen attackers. Its name was Abdul Rahman Al Lagori. The Taliban said the same fighter dodged security forces at the airport and entered.

Taliban released a photo of their fidayeen after the attack on Kabul airport.

US soldiers and allies were on target

The Taliban said that in the attack we targeted American soldiers and their Afghan allies. Those people whom we had identified as spies were also the target. The Taliban was not our target.

ISIS-K chief behind the attack on Gurudwara in Kabul

The Kabul Gurudwara was also blasted on 27 March 2020. 26 Afghan Sikhs and one Indian Sikh were killed in this attack. After this, on 4 April 2020, the Afghan National Security Directorate (NDS) arrested Farooqui from Nangarhar province. According to Afghan agencies, Farooqui was involved in this attack.

Farooqui confessed during interrogation that he was earlier associated with Lashkar-e-Taiba, which operates from Kabul and Jalalabad along with the Haqqani network. He joined Tehreek-e-Taliban Pakistan before joining ISIS-K. After this Mawlawi became the chief of ISIS-K after Zia-ul-Haq alias Abu Omar Khorasani.

Farooqui is a resident of Orakzai district of Khyber Pakhtunkhwa province of Pakistan. He belongs to the Momazai clan. He was arrested by Afghan agencies along with 4 Pakistani nationals. Farooqui had told the agencies that ISIS-K has its roots in Rawalpindi, Pakistan. After this, he was sent to Bagram Jail, but after the Taliban rule in Afghanistan, Farooqui was released like other prisoners.

Pakistan wanted Farooqui to be handed over to him

The interesting thing about Farooqui is that when India requested for his interrogation, it was turned down, but the Pakistani Foreign Ministry called the Afghan diplomat and demanded the handover to Farooqui. It is believed that Pakistan feared that Farooqui would spill everything about his links with Pakistan during the interrogation of Afghan and other agencies.

However, he was never questioned about it. Afghanistan also rejected Pakistan’s demand and said that action will be taken against Farooqui according to Afghan law.

Information about Kitchen Cabinets in Columbus