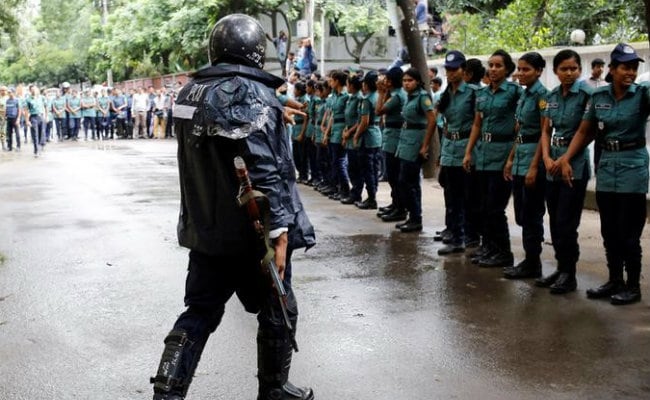 No one has been arrested yet, police and Cox’s Bazar said (Representational)

Mohib Ullah was talking with other refugee leaders outside his office after attending evening prayers at around 8:00 pm (1400 GMT) when at least four assailants came to the spot and shot him dead, Rafiqul Islam, police of Cox’s Bazar, told AFP .

“Four to five unidentified assailants shot him from close range. He was declared dead at a MSF hospital in the camp,” he said.

He said police and the Armed Police Battalion, which is tasked with ensuring security for the country’s 34 Rohingya camps, have stepped up security, deploying hundreds more armed officers.

No one has been arrested yet, according to Islam.

“We are conducting raids in the area,” he said, adding Ullah had not alerted police of any threats from any group.

Mohammad Nowkhim, a Rakan Ullah’s Arakan Rohingya Society for Peace and Human Rights leaders (ARPSH), said Ullah was talking to other Rohingya outside the ARPSH office at Kutupalong, the world’s largest refugee settlement, when an unidentified assailant shot him at least three .

“He was in a pool of blood. He was brought dead to the nearby MSF hospital,” Nowkhim said from a hideout, adding that many Rohingya leaders have gone into hiding after Ullah’s killing.

No one has claimed responsibility, but a Rohingya leader told AFP that Ullah was killed by the extremist group Arakan Rohingya Salvation Army, which was behind several attacks on Myanmar security posts in recent years

Ullah, who was 48, emerged as the main civilian leader of the persecuted Muslim minority community when more than 740,000 Rohingya took refuge in camps in Bangladesh, after a military crackdown by the Myanmar army on their villages in Rakhine province in August 2017.

Ullah formed the ARPSH in a Bangladeshi camp months after the influx, and it helped investigate the carnage carried out by the Myanmar armies and the Buddhist militias during the crackdown.

In August 2019, he organized a massive rally at Kutupalong camp, the main Rohingya settlement, in which some 200,000 Rohingya attended. The rally confirmed his top leadership among the refugees.

That year, he was also flown to the United States, where he attended a religious freedom meeting hosted by the US State Department and led by then-US President Donald Trump.

But in recent years, Bangladeshi security forces restricted the activities of Ullah’s group. ARPSH was not allowed to hold any rallies during the anniversary of the crackdown in 2020 and 2021.

An uneasy calm has descended in the camps, Rohingya leaders and rights activists monitoring the settlements said, adding Ullah’s killing will have bigger ramifications.

“We do not expect another progressive leader like him in the Bangladesh camps. We are very saddened by his untimely death,” Rohingya artist Mayyu Khan wrote on Facebook.

The United Nations refugee agency, UNHCR, said it was “deeply saddened by the killing of Mr Mohib Ullah, a prominent Rohingya refugee representative”.

“We are in continuous contact with law enforcement authorities in charge of maintaining peace and security in the camps,” the UNHCR spokesperson in Bangladesh, Regina De La Portilla, told AFP.

Sarkari Naukri 2021: Get government job in BHEL without exam, will get salary of Rs 2 lakh on this post

Delhi University Bharti 2021: Hundreds of Assistant Professor vacancies in DU, will get 7th...